From Bruce Springsteen’s Devils and Dust: 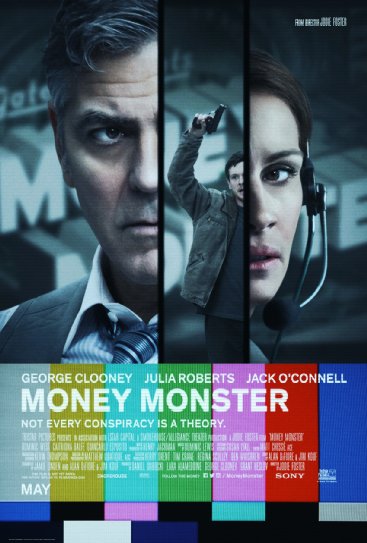 I paid just $5 to see a matinee of Money Monster. And yes, it was worth the money.

More good news? The film wraps in a tidy and brisk 98 minutes.

The film was directed by Jodie Foster, working from a script by Jamie Linden, Alan DiFiore, and Jim Kouf. In an interview in Entertainment Weekly, Foster said ” I was happy to make the film for 20 cents” meaning “However we could get it off the ground.”

Foster and Clooney on the set

In the same interview, George Clooney responded that he got wind of the film because “She sent me a letter. She offered me, like, $12 bucks.” 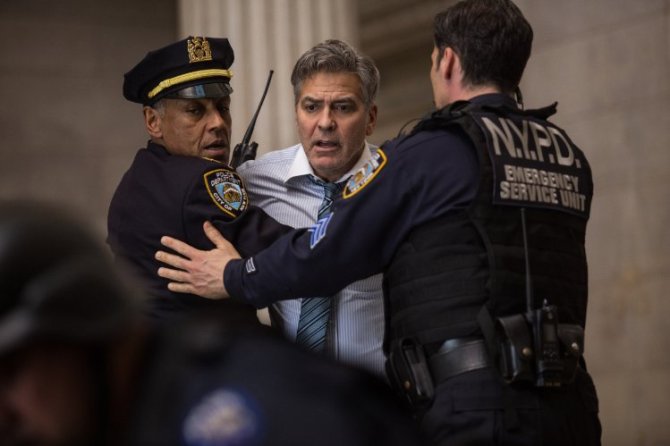 Julia Roberts signed on because George Clooney had sent her the script. She had time to read it, she liked it, and she had very few scenes with Clooney.

Well you can be sure the actual numbers on their paychecks were considerably higher for both Clooney, Roberts, and Foster. But that’s really besides the point.

The real topic of the film is of course – money. George Clooney plays Lee Gates, a cable network TV talking head, with his own daily TV show that is filled with schtick and graphics, and jokes. If Gates hadn’t knowledge and skills, along with a track record of successful picks, he would’ve been bounced off the air long ago. So we can assume that he knows, in the main, what he is talking about. We might say that he is a cross between a carnival barker, a huckster  in the days of the Old West who sold bottles of a ‘magical elixir  – to cure what ails ya‘ from the back of a covered wagon, and at the same time comes off about as well as Jeff Daniels as Will McAvoy from The Newsroom.

Julia Roberts plays his exec producer/director , Patty Fenn, just as Emily Mortimer played Mackenzie McHale in The Newsroom. She runs the Control Room and is the voice in Gates ear.

There is yet another connection to The Newsroom, or should I say Aaron Sorkin. Foster uses the walk and talk to introduce us to Gates and Fenn, and also employs the overlapping dialogue technique at times.

Anyway, we jump into the story rather quickly. A while back, Gates had recommended a stock buy. On Ibis Clear Capital. Strongly. Had in fact called it a safer play than a savings account. That was back on March 6th. But recently, the stock plummeted. In fact, 800 Million of the Ibis valuation had vanished in a heartbeat. Main Street investors (meaning regular people as opposed to Hedge fund operators), across the world, lost tons of money. Including a truck driver from Queens, NY, one Kyle Budwell (played by Jack O’Connell).

But Lee Gates continued with his schtick, with his song and dance routines, his slick patter, and hectoring voice telling his viewers to Get some balls and to man up! Then one day Budwell shows up at the FNN HQ. Security was lax, or non-existent – either way you’ll have to suspend disbelief because before either Gates or Fenn or anyone else can stop him, Budwell is on the set, during the live broadcast. He’s armed with a handgun, and seconds later, at the command of the gun-wielding Budwell, Gates is wearing a vest loaded with explosives. 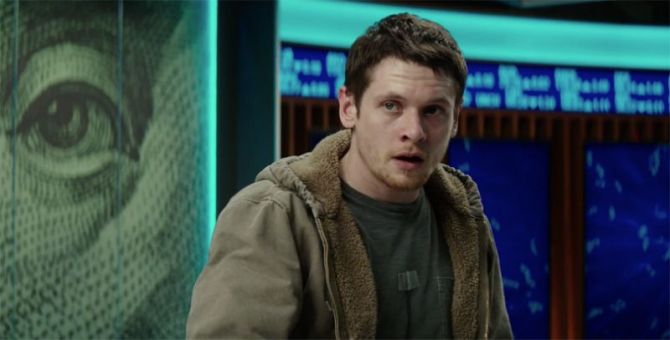 Yes, Kyle Budwell is as mad as hell, just like Howard Beale in the film Network was so very long ago. Budwell wants answers. What happened to the money?  He rants for a while saying that ‘they’ are robbing us blind and no one even asks how. He means they as in the collective term for Wall Street.

Well the Ibis Clear Capital CEO, Walt Camby (played by Dominic West) is not quite missing. He’s somewhere in the skies at 35,000 feet above everyone, and he can’t be reached. No one in fact even knows where he is flying from or to.  The Ibis press spokeswomen, Diane Lester who is played by Caitriona Balfe (The Outlander) has no answers either. Ibis is calling it a glitch in the algorithm programs – a convenient and inexplicable answer, which is really no answer at all. 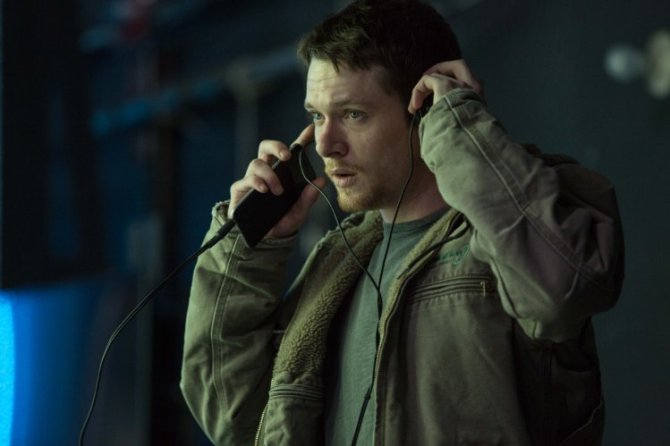 That’s about as far as I’ll choose to take you. NO spoilers today folks. The film is fast-paced and is pretty good film making as a thriller. Yes of course, it is not unpredictable, which is not a true flaw, but deserves mention. Yes, you have to suspend disbelief more than you thought going in, but to me, the film works as a thriller.

As a statement film – about Wall Street, greed, the role of the media and the effectiveness of the NYC Police Department, this film is not as successful. But I will lay that at the feet of the writers. Clooney, Roberts, and O’Connell do very fine work, and are ably assisted by the supporting cast which besides Dominic West, and Ms Balfe, also includes Giancarlo Esposito as Police Captain Powell, Dennis Boutsikaris as the Ibis CFO, and Lenny Venito as Lenny, the intrepid FNN cameraman.

Less successful is Chris Denham as Ron Sprecher as an associate producer. He’s given the role of court jester to provide a bit of levity here and there. But he couldn’t be expected to do much with a role that requires him to try out erectile cream, and be the TV producer with his boots on the ground downtown as he is asked to run around the financial area. 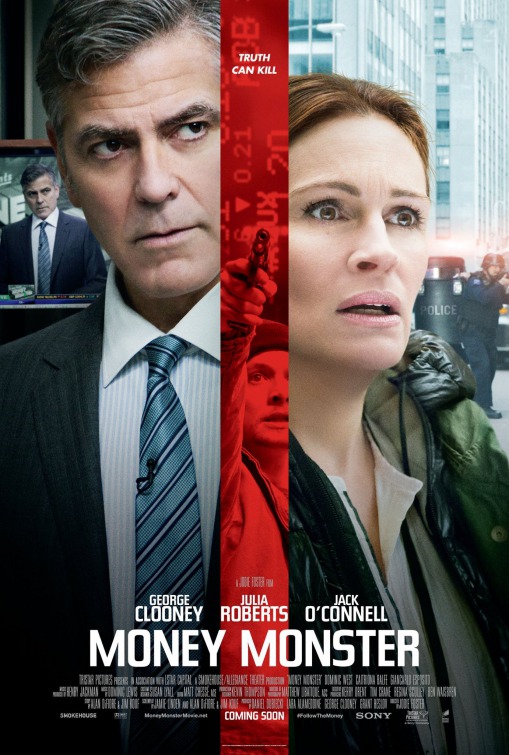 I’ll close with the point that the film is ever so timely. While we don’t see any candidates on screen, I will say that the words, from a certain party, who I will abbreviate by calling him Bern, can be read as an underlying source of some of the story.

I’ll rate this film as a four point zero, and I’ll recommend it. It is far from perfect, and Foster, Roberts, and Clooney will hopefully all work together again someday. And one more thing, O’Connell is from Derby in the UK. But his Noo Yawk accent is better than I expected.

One thought on “Money Monster”