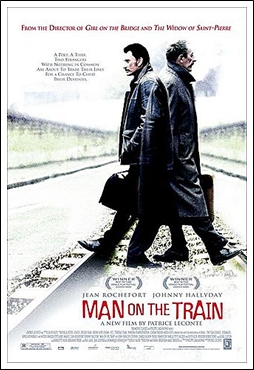 The Man on the Train (L’Homme du Train) is from French Director Patrice LeComte. Two men meet by chance, a friendship begins but there are finite limits. Beyond the coming Saturday, three days hence, neither can make any plans at all. More on that later.

The titular character (The Man on the Train) is Milan played by former French rock star Johnny Hallyday. In his younger days, Hallyday was called the ‘Elvis of France’.

As the film begins he’s the one on the train. We know nothing of him, nor do we know where is is going. In fact, we don’t even know where he is when he gets off the train. It is a forlorn provincial town in Eastern France. The time is the late fall and there aren’t many folks around.

Milan has to remedy a headache so he stops in at a local pharmacy to procure some aspirins. Also in the pharmacy at this time is Manesquier, an older Frenchman played by Jean Rochefort, who even as an elder statesman of acting is still one of France’s most admired actors. 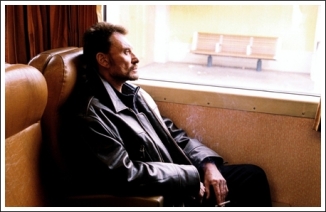 END_OF_DOCUMENT_TOKEN_TO_BE_REPLACED

Can a film be thrilling when instead of exploding automobiles or grenades or bombs, the only thing explosive is an idea? Do you think you want to see a movie where instead of an ever-increasing body count, what becomes paramount is the rapidly rising number of ‘unique visitors’ or ‘page hits’?

Apparently the answer to these questions is that ideas do explode, and that page hits not only matter, but they can lead to someone becoming a billionaire, and provide enough fodder for a brilliant film that millions and millions will see.

When Mark Zuckerberg played by Jesse Eisenberg says that he got 22,000 page hits in the first two hours his website was online – jaws literally dropped both onscreen and in the audience. This (my) website has been online since the end of last october, and I’ve received only a few hundred more than 23,000 page visits.

The Social Network is a fast paced film and that won’t even begin to give you any idea about how fast the story moves along.  Eisenberg portrays Zuckenberg as both a motor-mouthed geek as well as someone sorely lacking in interpersonal skills. He is not trying to talk his way into the pants of Erica, (Rooney Mara) likely he had already visited that precinct; instead he’s off on a tangent about getting into a Final Club. He’s obsessed with the thought and the status that would come with it. He wants to more than just fit in to the social fabric of Harvard. He wants to hang with the elite, and the privileged. He can talk of nothing else. 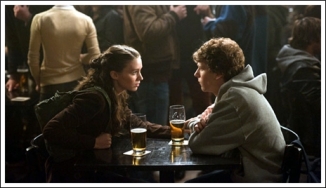 He motors along, amazing himself but not Erica with his wit and speed. He does it as fast as you can blink – almost beyond Erica’s understanding of what he is saying to her. Or ours. He comes off as a supremely arrogant, self-centered asshole, which is what Erica calls him as she finally has had enough and storms off.