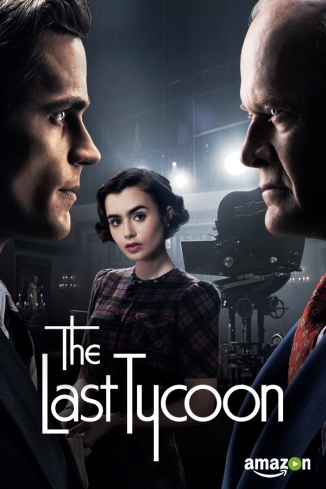 Aubrey Hackett (Screenwriter) – Don’t you ever go to church?
Monroe Stahr – (Head of Production at Brady American Pictures) – You know that I pray at the box office…

It is Amazon Pilot Season again. You watch the pilot offerings, then you vote for the one you want to be produced as a series. It is a great idea, and while you don’t have a say in which pilots are offered, you do have a vote to determine if a particular pilot is good enough to go into production as a series.

The folks at Amazon in conjunction with Trinity Pictures have reached all the way back to 1941 for one of their latest offerings. That’s the year that saw the posthumous publication of F. Scott Fitzgerald’s unfinished novel, The Last Tycoon. While Fitzgerald’s book was published unfinished it has been made into a movie before – Robert DeNiro, Tony Curtis, and Robert Mitchum starred in the 1976 version that was directed by Elia Kazan.

The tycoon in question is Monroe Stahr (played by Matt Bomer), a thinly disguised version of the legendary Hollywood producer Irving Thalberg, aka the Boy Wonder, who became the head of production of what would become MGM at age 26. The story can be summed up as a film producer slowly working himself to death. Some Spoilers follow but keep in mind that this is only the pilot, and story lines are introduced rather than decided.

The role of Louis B. Mayer, in this production, he’s called Pat Brady, is handled by Kelsey Grammer. It is the golden era of Hollywood. And Amazon has done a great job making the look of this period drama fit the time. 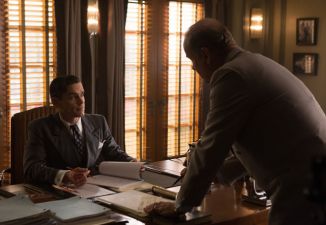 Bomer as Monroe Stahr seems like perfect casting. He has the style of a Hollywood leading man rather than a Hollywood ‘suit’.

And his acting isn’t just being charming to the women on the studio lot, or standing up to the Nazi consulate who demands that certain aspects of certain films be adjusted so as to be not unflattering to the Reich.

Brady is willing to go along as Germany was the second biggest market for Hollywood films in those days. But there’s more than just making the perfect film going on within Stahr. He was married to a top Hollywood leading lady – Mina Davis – who died in a tragic accident a year ago. Stahr has yet to recover from that tragic event.

In the office and on the sound stages and the studio lot, Stahr more than lived up to his nickname of the Boy Wonder. But at home, it was altogether different. Stahr watched, on a near nightly basis, all of Mina’s most recent films. And his current project was the Mina Davis Story.

He didn’t date, and his circle of friends was small.

Such was the life of a Hollywood producer. The film earns high points for showing us both the underbelly of Hollywood, as well as the fiscal battles in the head offices, and the struggles of the screenwriters to keep the copy coming.