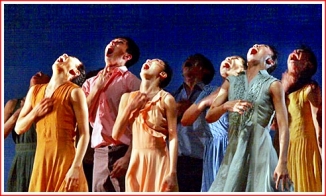 In one sense, you could say that this was a night at the ballet. But that might imply something traditional and classical like The Nutcracker Suite, or Black Swan. So more accurately, I’d call this Modern Dance, or Interpretive Dancing.

Now I’ve very little knowledge or history with modern dance. I did see a performance of The Alvin Ailey American Dance Theater, in New York, in the 70’s. And I saw a film called The Company which starred Neve Campbell, Malcolm McDowell, and members of The Joffrey Ballet. I did a write-up of that movie, ballet, dance music, and art work by Guan Zeju of ballet dancers back in 2009. The post was called Do You Wanna Dance. And my last venture into the world of dance was the brilliant Darren Aronofsky film Black Swan of a couple of years back. Natalie Portman won the Oscar for her role.

So now, here I am in Hong Kong, half way a round the world from Sarasota, Fl, it is a Saturday night, and I am going to see a Dance Performance called Oculus. It is not like I see a ballet very often,

Oculus in Latin means ‘eye’. This dance is described as a look into the inner workings and everyday lives of people in general. Each day, we experience a succession of desires. The may be as simple as wishing for a cold drink, staying dry and out of the rain, or as deep, powerful, and meaningfully complex as a sexual desire, or maybe someplace in between – when you wish for either quiet and solitude, or companionship, or simply a break from your labors.

Oculus is performed by Cloud Gate 2, a dance company from Taiwan. The performance is at once brilliant, innovative. creative, and astounding. It is also dark, and difficult, as each of the dancers/performers takes us through a day of desires and disappointments. Of hoped for gratification, of isolation, and ends with the thought that tomorrow might be better. 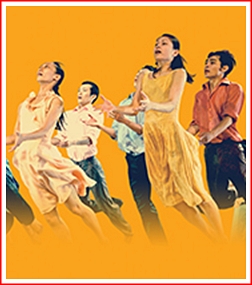 The stage is stark – just a barren leafless tree. The backdrop is a cloud filled sky which is either static, or filled with the motion of passing clouds. Rain/Snow/Sleet is brought to the stage in the form of a huge amounts of large unit confetti – maybe they are post-it sheets, that are shot from a wind machine over a lengthy amount of time. This ‘confetti’ remains on the stage, and later the dancers are seen slogging through it – as if it were an impediment (like mounds of snow) to the simple act of walking.

The confetti/rain also serves as a metaphor for the series of endless obstacles that each of us has to deal with daily.

The desires are represented by endless scratching or thrashing about which is often alarmingly violent yet clearly represents something of unfulfilled desires that eat away at all of us on a daily basis.