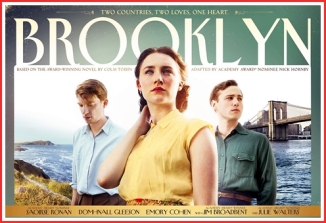 Father Flood: Anyway, we need Irish girls in Brooklyn…
Eilis: Wish I could stop feeling that I want to be an Irish girl in Ireland.
Father Flood: All I can say is that it will pass. Homesickness is like most sicknesses. It will make you feel wretched, then will move on to somebody else…

Who says size matters? This may be a small film, but it has a huge heart. Brooklyn is the tale of a young Irish girl in County Wexford, circa the early 1950’s. She wants more out of life than what she has there. The small town of Enniscorthy offered provincialism, gossip, dreary small lanes, and a lack of opportunity and all of those were wearing her down.

Eilis worked just two hours a week, on Sunday mornings at Ms Kelly’s Bakery. Besides that being her only employment, Eilis had to deal with Kelly who was a cold-hearted and spiteful woman. So immediately you knew that this young woman, Eilis Lacey wanted more from life. 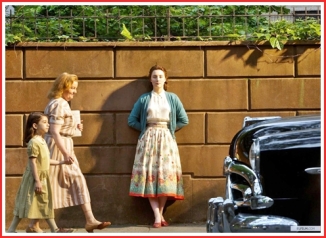 Her Dad has passed on a decade ago, and Eilis (pronounced as Ailish), her older sister Rose, and her Mom, were all the family that remained.

Rose, wanting her younger sister to have the life she’d never have, contacted a priest in Brooklyn who had roots in the same Irish town. He would sponsor Eilis to come to America and when she did she’d have more than just having her feet on American soil. He would be able to arrange housing in a respectable boarding house for Catholic girls, and secure a job in a downtown upscale Brooklyn department store for young Eilis.

The thing of it is, that by boarding a steamship bound for New York, Eilis would be leaving her family, possibly forever. And when the day of departure came, the faces we saw on the dockside and the steamship represented the contrasting  two sides of one event – the happy and cheerful faces of those looking down from ship’s decks, and the tearful and sad faces of those who remained.

Eilis’s journey begins with an initially rough crossing of the Atlantic. Cramped quarters and shared bathrooms, often unfairly locked, when added to sea-sickness can almost take the joy out of a new beginning for anyone. But Eilis was fortunate to have a savvy and experienced woman traveler sharing her room. With plenty of advice, both sage and sound, the crossing went far better as it went ahead than when it began.

Immigration Official: Exit through that blue door Miss. Welcome to the United States.

Eilis is played by Saoirse Ronan. Her performance as a homesick immigrant, a young woman coming of age, and as a stranger on American shores, is just spectacular.