Welcome to October. Football continues, baseball’s regular season will end in a few days, and for many of you – the cooler weather will result in lowered electrical bills as you might not need to run the air-conditioner as often as you had over the last few months. Although this is not a world-wide trend, it is true that people in the northern Hemisphere will begin to enjoy the transition towards cooler days. 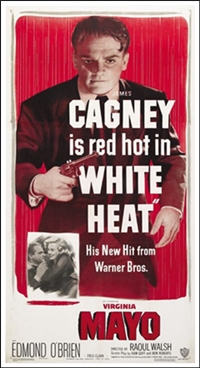 But are we completely done with hot weather? Not if you live close to the equator, and not if you live in the Southern Hemisphere. The reality is that it is always hot in some parts of this world; and certainly  having me state this as a fact, does not make it a newsworthy item.

So in advance of the coming delightful Fall weather, we shall take a last look at heat. Specifically films that have HEAT in their titles. I’ve assembled a list of films from the 40’s through the 90’s, so let’s have some fun and take a look at them.

White Heat opened on September 2nd, 1949. The stars of this film/noir were James Cagney, Viginia Mayo, and Edmond O’Brien. Directed by Raoul Walsh, the film did not win any Oscars, but more recently, this movie has been considered a classic in gangsters/prison genre.

James Cagney plays Cody Jarrett, the vicious and ruthless leader of a gang that specializes in armed robberies. Virginia Mayo plays his wife, and Edmond O’Brien plays an undercover cop who goes into prison to get close to Jarrett.

Jarrett was smart, sadistic, and tough. Some say that his devotion to his Mother, played by Margaret Wycherly was borderline creepy. Many have wondered how some of those scenes got past the ‘censors’ in those days.

In any event, Jarrett was married to the sexy and beautiful Verna (Virginia Mayo).

END_OF_DOCUMENT_TOKEN_TO_BE_REPLACED 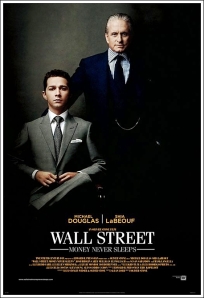 Everything is BIG in Oliver Stone’s sequel to his 1987 film Wall Street. This one is called Wall Street: Money Never Sleeps. As the film opens, Gordon Gekko (reprised by Michael Douglas) is being released from prison. As the property clerk returns Gekko’s personal items to him including a gold Cartier ‘Santos’ watch, a gold ring, a gold money clip with no money, and an outsized mobile phone – about the size of your shoe, you will think back to the time when Gekko was the king of the corporate raiders. When “Greed, for a lack of a better word – was Good”. It is now 2001 and Gekko no longer commands the attention fitting for one who was called (in another time and place) A Master of the Universe. In fact, upon his release, Gekko found no one waiting for him.

Stone then fast forwards us to 2008. We see some astonishing crane shots of New York’s glass and steel skyscrapers. We watch as the Wall Street news is flashed on-screen for us. As the camera pans across this city-scape, we are going to eventually find ourselves in a magnificent huge apartment/penthouse/loft (pick one – they all fit) belonging to Jake Moore (Shia LaBoeuf) and his girl friend Winnie Gekko. Yes, she’s that Gekko, as in Gordon’s daughter, and she’s played by Carey Mulligan.

Jake Moore is a successful investment banker/proprietary trader for a firm called Keller Zabel whose head guy, Louis Zabel, is played by a charismatic Frank Langella. He is Jake Moore’s boss, he is Jake Moore’s idol, as well as father figure. Within minutes of the film’s opening, Zabel gives Moore an off-cycle bonus. The amount is $1,450.000.

Also within minutes the firm we once knew as Keller Zabel is reduced to a smoldering fiscal ruin. This financial coup-de-grace was engineered by Bretton James, who heads up Churchill, Schwartz. They are a modern-day successor to Gekko’s firm. Bretton (not Brett) is played by James Brolin. Everything about this guy is ostentatious. His credo and mantra is mine is bigger than yours. And he wants to prove it to you over and over again.

END_OF_DOCUMENT_TOKEN_TO_BE_REPLACED

You are a practicing medical doctor working in London, UK. Your family is back home in Mumbai, India. You have three sisters, and a brother, and they and your parents want to see you. So you get your tickets, you call them giving them your schedule so they can pick up you at the Mumbai airport. When you arrive there’s no sign of them. You call the house and the phone rings, and rings, and rings, but no one answers. Well what can you do? You head outside to look for a taxi. While you are standing curbside, two men on a motorcycle pull up.

“You are Dr. Aamir aren’t you?”, they ask. When you nod affirmatively they toss you a cell phone, which starts to ring. They say, “Take the call…” and drive off.

This is the beginning of a superb 2008 film called Aamir directed by 1st time director Rajkumar Gupta and starring 1st time film lead actor Rajeev Khandelwal. The voice on the phone instructs Dr. Aamir to look for Taxi 8866 which should be approaching him, any second. Sure enough, here comes the cab. Dr. Aamir protests – this must be a mistake, you’ve confused me with some else, who are you?

The caller proceeds to identify not only Dr. Aamir, but each one of his family. He further instructs that Dr. Aamir must follow to the letter each and every one of the instructions he will be given – if he ever wants to see his family alive again.

END_OF_DOCUMENT_TOKEN_TO_BE_REPLACED

this side or the other… 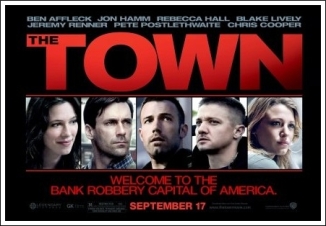 There’s something about Bank Robbers that screenwriters, directors, and producers, as well as audiences just love. From Bonnie and Clyde (1967) to Heat (1995), from Charlie Varrick (1973) to Point Break (1991), and from Dog Day Afternoon (1975) to the just released The Town, movie makers and movie watchers, continue to agree that bank heist films are ever so popular and worth seeing. None of us want to be a victim or present during a bank robbery, but we are quite willing to cough up some dead presidents to watch these goings on either in a movie theater or at home on a DVD.

Ben Affleck, in his sophomore turn as a film director, has given us an entertaining, engrossing, and excellent effort in the bank job genre. Ben not only helmed the film, he also co-wrote the screen-play with Peter Craig, Aaron Stockard, and Chuck Hogan whose novel Prince of Thieves was the source for this movie. Affleck also starred in the film as Doug MacRay leader of a crew whose forte was armed robbery.

END_OF_DOCUMENT_TOKEN_TO_BE_REPLACED

Today I watched the film called The Japanese Wife. This film had some it of shot in Japan, but it is not a Japanese film. This was, surprisingly, a film directed by Indian film director Aparna Sen. Before becoming a director, Sen was a noted film actress in India.

The story’s lead character is a school teacher named Snehamoy Chatterjee. He is located in the Sundarbans area of West Bengal, India. His home is in a remote area mostly noted for being the largest tiger refuge in the world as well as the world’s largest tidal mangrove forest. His life is lonely. His parents were killed in a flood when he was a boy, and he has been raised by his maternal aunt. The role of Snehamoy was played by Indian actor Rahul Bose.

One day, he finds an advert for pen-pals in a magazine. On a whim, he writes to this Japanese woman named Miyage. She’s also lonely. She runs a shop out of her home with her ailing mother. She is painfully shy, and hasn’t any friends, nor has she ever been in love. Her role is played by the Japanese actress Chigusa Takaku.

Their relationship begins with a series of letters written in English with both of the using a dictionary. These are narrated (in English) in part by both Snehamoy and Miyage. From these letters, the bonds of love emerge. In fact, via letters, they exchange vows, and considered themselves married. All without ever having a face to face meeting. Letters and an occasional phone conversation are the extent of their physical relationship.

END_OF_DOCUMENT_TOKEN_TO_BE_REPLACED

The American opened on September 1st. I had intended to see the first show in the morning but I had to stick around for a UPS delivery, so I had to wait until today, the 2nd  to see it.

Directed by Anton Corbijn and starring George Clooney, The American is another of those laconic and iconic male characters, you know – the strong and silent type. While Corbijn’s style is a bit unique, the story of an assassin on his last job isn’t.

Corbijn takes his time getting into the story despite the lengthy pre-opening credits sequence of a shootout in Sweden that Jack survives and leaves three corpses behind. That’s no spoiler because – guess what: he wasn’t going to die in the first 10 minutes. Anyway, Corbijn’s style is to present scenes in a semi-detached manner, or without much in the way of exposition. He trusts you the viewer to be able to grow with the story and piece those seemingly stand alone scenes together.

Clooney as Jack, or Edward, or Mr. Butterfly, gives away nothing. He doesn’t answer questions directly or at all. It’s not so much that he is a brooding guy tormented by something from his past – in fact we never learn anything about his past. He’s kind of an enigma, and it seems that’s the way Jack wants it. An assassin can’t afford to make friends.