Ordinary Miracle is a story about two people who meet by chance on a train platform. They’re total strangers and unrelated to each other in any way other than both are traveling and passing through this one station.

The event that caused them to meet was anything but romantic. Separately, they each consider or think that a third person, a man standing by himself at the far end of the train platform, may be  going to take his own life by leaping in front of an oncoming train.

They independently watch him, and as the train approaches, this man edges toward the platform side of the oncoming train. They spring into action and barely pull this man back to safety from a sure death by punching him and wrestling him to the ground.

Later in the Train Master’s office, this man angrily denies any thoughts of suicide. He claims he was beaten and kicked for no reason at all – out of the blue – is how he describes it. END_OF_DOCUMENT_TOKEN_TO_BE_REPLACED 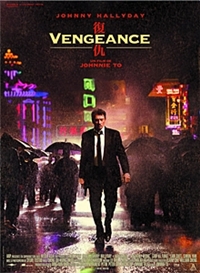 Vengeance begins with a mob hit. A Chinese man arrives home with his two kids. They run in from a driving rain storm. The wife is preparing dinner. Literally seconds later, there’s a knock on the door. When the man approaches the door to see who it is through the door’s peep-hole, it will become the last thing he ever does. He’s shot in the face right through the door.

That is how Hong Kong film director Johnny To opens his 2009 Cannes Film Festival entry called Vengeance. This film is a co-production of To’s Hong Kong based Milkyway Image Production Company and a French outfit, ARP Selection. In addition to the Hong Kong cast, there’s one more. That would be the 64 year old French actor/singer named Johnny Hallyday aka “The Elvis Presley of France“.

The title tells all. This Frenchman requires revenge for his murdered son-in-law and two grandchildren, and his own daughter who suffered critical wounds in trying to defend herself and her children.

Johnny To is a master of the gun-play genre, but the script by Wai Ka Fai is flawed. It seems some what truncated. The writing between the five set pieces is in place to move the story forward and not much else.  It fails in  making it more interesting. Simply,  there isn’t enough writing. Instead, there’s a lot of short cuts taken meaning that what should be logical turn of events based on what we are shown seems to happen far quicker than that, with To and Wai assuming you’ll be able to connect some of the dots.

END_OF_DOCUMENT_TOKEN_TO_BE_REPLACED

Friday, December 18th, 2009:  Opening day, make that opening morning. I queued up for a 10:15 AM show at the local AMC Cineplex, the first screening of the day. Not really much of a line, but by the time the Movie Talk, ads, Previews, and the admonishments about not creating your own soundtrack/silence is golden had ended, the house was about 2/3’s full. Not bad for a morning, a work day and a school day.

Seeing how the film’s director and screenwriter, the 55 year old James Cameron had been working on this film for a number of years, there has been tons of material – images, news releases, articles, and blogs about the film already available far in advance of opening day. I tried to stay clear of it, and succeeded.

This morning, intentionally breaking my own Avatar info boycott, I read just 2 reviews about the film prior to departing to go to the theater. The first was by the New York Times film critic Manohla Dargis, and the other was by Roger Ebert on his website. Both were quite positive so I was minimally armed to expect something good.

END_OF_DOCUMENT_TOKEN_TO_BE_REPLACED 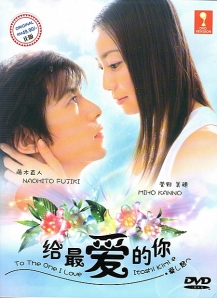 This past week I got absorbed in this Japanese TV Drama Series, Itoshi Kimi e. The stars were the lovely actress Miho Kanno and actor Naohito Fujiki.

The synopsis  below is from Fuji-TV, the broadcast station:

What if the one you love were destined to lose his eyesight in three months?

If you were him, what would you want to see last?

Shiki Tomokawa is a new pediatrician who is enjoying her life. She falls in love with Shunsuke, a cameraman, who is destined to lose his eyesight in a couple of months. How will Shiki react when she finds out Shunsuke’s destiny?

“To the One I Love” takes place in two contrasting cities—in the hustle and bustle of Tokyo, and in the peaceful city of Nagasaki, and depicts both the joys and sadness of life, and the interaction with family and friends. — Fuji TV

END_OF_DOCUMENT_TOKEN_TO_BE_REPLACED

Out of the night that covers me,
Black as the Pit from pole to pole,
I thank whatever gods may be
For my unconquerable soul.

In the fell clutch of circumstance
I have not winced nor cried aloud.
Under the bludgeonings of chance
My head is bloody, but unbowed.

Invictus is a Latin word that means Unconquered. It is also a poem written by the British Poet William Ernest Henley, first published in 1875 and presented in part above this paragraph as well as towards the end of this post. And, as you may have heard, Invictus is the title of the new film by Clint Eastwoood.

END_OF_DOCUMENT_TOKEN_TO_BE_REPLACED

I watched a superb film yesterday. This particular film is a bit of a departure for me. Not that I watched an Indian film; that’s not uncommon for me. Instead, the departure is that I chose to write about it.

Delhi-6 was directed by Rakesh Omprakash Mehra. This movie is not about a sports team, nor a disco, nor a bar. Delhi 6 is actually a postal code signifying a specific neighborhood. The actual code is Delhi 110006.

This 2009 film was a thoughtful story, and was so special visually that I had to share it with you. The story begins in New York, with an American man, Roshan, of Indian ancestry, deciding to accompany his ailing grandmother back to India, so she might die on the soil on which she was born. And so within minutes, we arrive in Delhi India.

END_OF_DOCUMENT_TOKEN_TO_BE_REPLACED 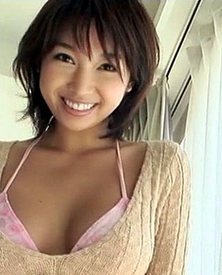 The Skinny: Another day and time for another Gravure Idol DVD. After the solid disappointment I experienced in watching the debut DVD of Asana Mamoru, <— click for the review, it is time for a video that would make me and everyone else smile. Well I found one. It isn’t new, in fact it a October 2008 release. The model is Ayumi and the title of the DVD is Summer Jewel.

Guys, this gal would be a jewel at any time of the year, in any season, or in any kind of setting. When you see a smile like this, you just know this is going to be a great video. And speaking of her smiles, here you go. Arigato Ayumi-san!

An exciting montage opens the video. I say exciting because of the pacing and the new and fresh music track that accompanies the visuals. Immediately following is the 1st of the main chapters. Our lovely model wears a beige sweater over a bikini. END_OF_DOCUMENT_TOKEN_TO_BE_REPLACED