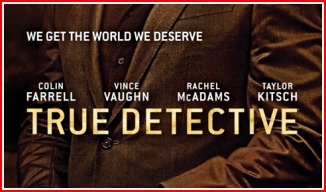 Now that the second season of True Detective has officially become a part of my television watching history, as well as yours, I think rather than write a long review, I’ll do a lengthy alphabet soup of observations and questions.

As you may have already realized, this 2nd Season Of True Detective has turned out to be one of the most polarizing tv series seasons ever. There are vociferous people all over the internet/blogosphere all clamoring for attention. There seems to be as many people who either:

as there are folks who thought well of it.

So without further preamble, let’s dive in.

A) In Episode Three: There is a dream sequence where Ray’s father predicted he would die among the giant trees. And that’s where Ray did die. Yeah, there were problems with him driving into the woods like eventually they would hunt him down, the elements would get to him even if they didn’t find and kill him, cell phone capabilities would be seriously impaired. Also that sack of money was way too big for him to run with.

Finally – having the dream become the reality was just too gimmicky. It is not that special an accomplishment to write about a dream in Episode Three then have it become real in the finale (episode 8).

But to Ray’s credit – his intent (knowing he was going to die) was to draw them as far away from Bezzerides as possible.

B) Despite having time, and certainly the money, Frank didn’t even think to buy a different car. Then again, wasn’t it strange that the Mexicans were not following Frank up to the mountain resort for the heist. Actually they couldn’t as Frank and Ray had a different car for the trip to the mountains which they destroyed after. The Mexicans only follow him days later.

Ray didn’t get a different car either. But in reality he didn’t have time.

C) Why did the Vinci Police Chief show up at the new Railroad Station, which, by the way, is in Anaheim. I can see undercover, or even uniformed police staking out the station for Ray and Ani – but surely they didn’t know about Len. Hence why was Vinci the C of P there, and carrying the fake diamonds? If Ray called him – we didn’t see it, and as far as we know – it was Len’s sister who told Bezzerides that Len would be at the station. Did Len called the Chief?

Why wasn’t the bus depot being watched?

END_OF_DOCUMENT_TOKEN_TO_BE_REPLACED

When we last watched True Detective, Episode 4 (Down Will Come) had ended in a bloody shootout. The streets with no names were filled with the bodies of cops, criminals, and people who were just caught in the crossfire. The gutters literally ran red with blood.

So when Episode 5, called Other Lives, began – the calendar had moved forward some sixty plus days. Nothing had remained the same, in terms of career, for Detectives Ani Bezzerides, Detective Ray Velcoro, and CHP Officer Paul Woodrugh.

Bezzerides was still a cop, still based in Ventura County, only she was no longer a homicide investigator. She was now set up as the uniformed desk officer of the Property & Evidence Lockup. Her bosses had also required her to attend group counseling to work through her sexual predilection…

Bezzerides: I like big dicks….
that woke up the room of her fellow cops in group counseling

This didn’t mean she had stopped working the case; only it meant she was ‘investigating’ from her desk, rather than out in the field.

Velcoro had resigned from the Venice police force. He took Frank Semyon up on his offer to come work for him. Velcoro was now collecting overdue rents from the residents at Frank’s motel. Velcoro, now shorn of mustache, and 60 days into his sobriety looked much better. But is he a new man? Not really.

END_OF_DOCUMENT_TOKEN_TO_BE_REPLACED

Back in 1971 Rod Stewart and Ron Wood penned a tune. The title was Every Picture Tells a Story. From the lyrics:

Make the best out of the bad, just laugh it off
You didn’t have to come here anyway
So remember, every picture tells a story don’t it

Now think of what Velcoro said about the world, its people . and their problems, in answer to Woodrugh saying I just don’t know how to be, out in that world.

Woodrugh: I just don’t know how to be, out in that world.
Velcoro: Look out there. Nobody does.

Velcoro said – Look out the window. Nobody does.  It’s like dust in your eyes – blink it away.

But the characters in True Detective aren’t complete, and certainly what you see is not all that you get. The Series, in its second season, is the TV equivalent of peeling an onion,. What I mean is that there’s multiple layers to each of the leads. They’re haunted by their pasts, and they struggle in the present. 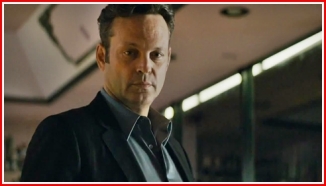 As Frank Semyon says to his wife, Avocado trees? Having a kid? Stan? With everything going on in my life – I’m lucky I can even see. So Frank goes back to being a mobster rather than a business man. He’s doing drug deals, he forces his way into a motel partnership with the same guy he sold the motel to in the first place. He shakes down a construction outfit. 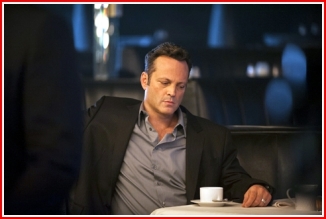 He even asks Velcoro to sign on with him. Velcoro says, I’m not muscle, Frank. But Semyon doesn’t want Velcoro to be muscle – Frank likes that Velcoro is smart. He even suggests that Velcoro put his police career to bed.