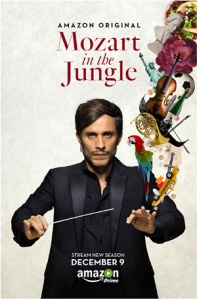 As you may recall, Mozart in the Jungle concluded its second season, back in January of this year, or December 31st, 2015 if you binged, with a bitter battle between the artistes and the orchestra’s management and board of directors. It was more than just a loud and ugly argument about wages.

In any event, while many of you were about to take a summer vacation, assured that your jobs would still be there on your return to the workplace, the members of the (fictional) New York Symphony Orchestra had no such certainties.

So, after some contretemps between Rodrigo de Souza (Gael Garcia Bernal) and the board’s version of Darth Vader, who went by the name of Edward Biben, who suggested that in exchange for Rodrigo’s resignation as Conductor, he would push through all of the orchestra’s demands. But the plan fell through, as a majority of the board, under Gloria’s lead, chose to reject the orchestra’s demands, which of course nullified Rodrigo’s resignation. 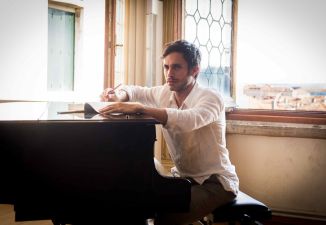 So there was a lockout, and finding themselves unable to enter their home venue, the orchestra traveled the few short blocks from Lafayette Street over to Washington Square Park. There they gave an impromptu and free concert.

After which they scattered in multiple directions, unsure of their fates. As viewers, we would all have to wait for Season 3 to find the answers to the question of the orchestra’s survival as well as many others.

Season 3 of Mozart in the Jungle launched on December 9th with all 10 episodes available for bingeing or watching at a more leisurely pace. As the first episode began we find ourselves watching Rodrigo, the orchestra’s conductor, riding a bicycle down the Grand Canal of Venice, Italy. 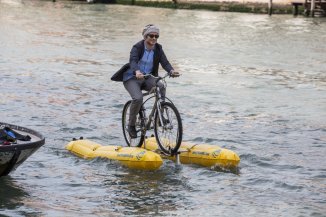 Technically, one may not ride a bike on water, but what we really got was Rodrigo on a bike attached to some pontoons. So Rodrigo was in Venice Italy, Hailey was on tour with the Andrew Walsh Ensemble. 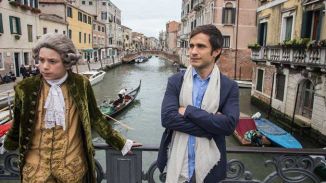 Rodrigo, when not conversing with a young Mozart, was introduced to and began working with a reclusive opera diva called Alessandra (played by Monica Bellucci). And so it begins. 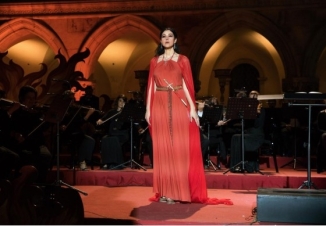 Season Three will take us from a lockout to a lockup. Said another way, we will travel from Venice, Italy all the way to the New York Department of Corrections facility located on Rikers Island in New York.

My thinking was that this season, while quite entertaining, was more than a bit scattershot – or as I like to say – all over the place. That doesn’t detract from the excellent music, acting, and location shooting. Those were the strong pluses. 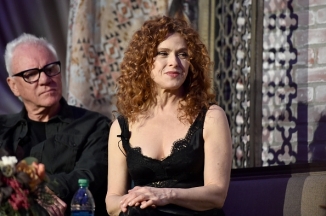 But on the debit side of this series ledger, too much time was given over to scenes that really held no interest for us. Thomas  Pembridge (played by the always excellent Malcolm McDowell) who once was the erstwhile conductor of the New York Symphony, became the ‘old’ conductor of said symphony, or said another way Musical Director Emeritus, when Gloria (Bernadette Peters) brought in Rodrigo.

Somewhere in the middle of the above, while Thomas’s angst may have softened – indeed he was now seeing Gloria as his paramour – did we really need to have Gloria and Thomas motor out to Long Island to visit Gloria parents in the 8th episode which was called Circles Within Circles. In the same vein, Episode 7 was called Not Titled Yet, and it was a literal documentary about the Symphony’s concert on Rikers Island.

END_OF_DOCUMENT_TOKEN_TO_BE_REPLACED 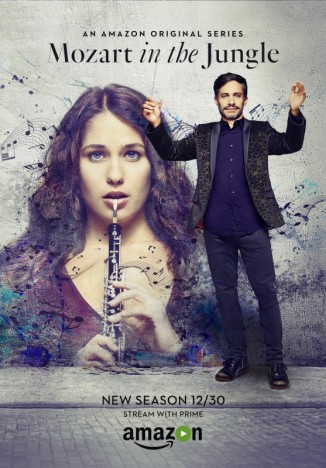 Tchaikovsky, Mahler, Mozart, Sibelius, and Schubert don’t get a lot of airtime at my place. It’s not that I don’t care for them, rather that I haven’t the time, which really means I’d rather watch something than listen to something. But if music from these gentlemen and others of that ilk can be compressed into smaller sized samples…

On February 6th of 2014, Amazon released the pilot for an original TV series. It was called Mozart in the Jungle, 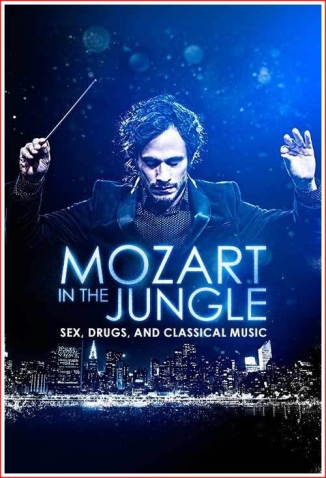 and it was an adaption from Blair Tindall‘s book – Mozart in the Jungle; Sex, Drugs, and Classical Music. I reviewed the pilot here, and then the long wait began. Amazon had left it to its viewers to vote on which of six pilots would be made into a series.

So on Dec 23rd, 2014, Amazon rolled out the rest of the series 1st season. I reviewed the second episode called Fifth Chair here, and settled in to watch the remaining episodes. But somewhere around Episode 4 (You Have Insulted Tchaikovsky) or Episode 5 (I’m With the Maestro), I felt the show had left the rails, venturing into territories that neither interested me, nor seemed a part of the story that I had begun some time before. So I abandoned the series. 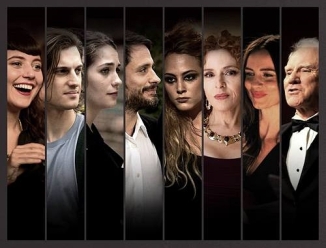 Now, in the present, with some time on my hands, along with the knowledge that Amazon had rolled out Season 2 of Mozart in the Jungle for release on December 30th, less than a week ago, I jumped back in and finished Season 1, and dove in to binge-watch Season 2. 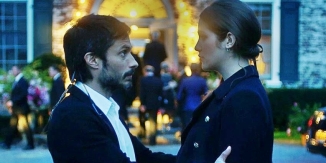 My original complaint still registered, even after completing Season One. With 10 half-hour shows, it isn’t that much of an investment in terms of time to watch the show and a full season of the series.. Especially since it is not on broadcast TV, you can choose the time when you want to sit down to view the show. What you get is a mix of comedy and drama, seasoned with sex, classical music, and an occasional foray into drugs, and what I expected was a linear story, that had plot lines that you could follow along with. 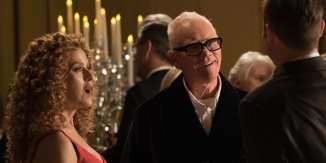 But the reality is that the term ‘linear’ only fits some of the time. Which is to say, that when the show isn’t following a dramatic linear plot line, it often strays into  a version of the Seinfeld model.  Notice I said ‘version’.

I’m not talking about the Seinfeldian quirky and silly characters behaving badly or foolishly. Rather, I’m saying that what appear to be normal folks are suddenly participating in a zany or screwball comedy only without punch lines. There is a sense of disconnect from one episode to the next – as if to say that the show often heads off on a what appears to be a tangent which appears to be kind of remote. Only it isn’t.