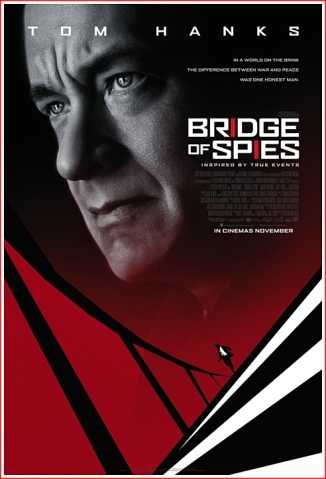 FBI Agent Hoffman: We need to know what the Russian was telling you. Don’t go all boy scout on me. We don’t have a rule book here…
James Donovan: I’m Irish, and you’re German. But what makes us both Americans? Just one thing… one, only one. The rule book . We call it The Constitution, and we agree to the rules. And that’s what makes us Americans. It’s all that makes us Americans, so don’t tell me there’s no rule book…and don’t nod at me like that, you sonuvabitch…

Yeah, Tom Hanks is back! 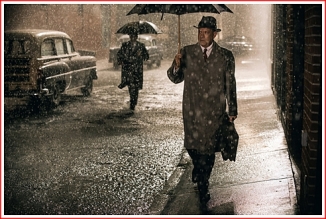 Once a upon a time, the American film going public were represented by actor Jimmy Stewart, truly an actor for the ages, as our Everyman. He not only portrayed us on-screen, he was us – through and through. At the same time that Stewart was flourishing, there was Gregory Peck who was not quite an everyman. He was taller than most, and surely more handsome than most of us, so instead of being another everyman actor, he was the man who almost every man, who watched movies, wanted to be.

In today’s world – Tom Hanks slots almost perfectly between a Jimmy Stewart and a Gregory Peck. And never has this been more evident than in the just opened and latest film from Steven Spielberg – Bridge of Spies. 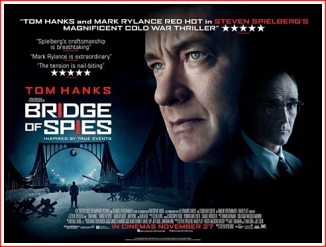 The film has its beginning in 1957. It was a time when we lived in a paranoid world of nuclear posturing, saber-rattling, and geo-political brinkmanship. We were both fearful and hateful of Russia and we were not surprised to learn that Russian spies might be anywhere in our midst if not everywhere. Each of the top two super-powers, in 1957, not only mistrusted each other, or feared each other, but each did everything they could to spy on the other country.