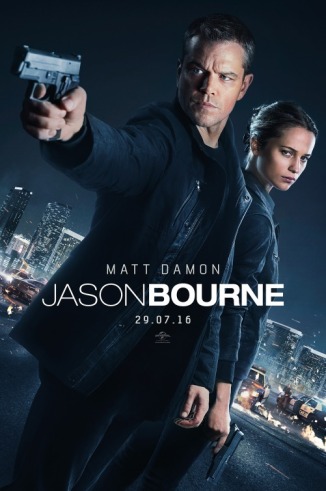 The long-awaited and much-anticipated returns of both Matt Damon and Director Paul Greengrass to the Bourne brand of action films has happened. It’s been nine years since The Bourne Ultimatum’s successful release. So many of us were really primed for this new film

Jason Bourne (this is the 5th Bourne feature and the 4th with Matt Damon) clings almost religiously to that formula. In short, the more things change, the more they stay the same. And that’s also the bad news. Let’s look at some of the particulars.

After Bourne jumped into the East River from the facility on E 71st and then swam away, and after Parsons boarded a bus to somewhere out of Tangiers, Morocco in The Bourne Ultimatum – one would have thought that they’d have trouble reconnecting. But they did. Albeit nine years later.

Nicky who was in charge of logistics and the agents well-being is now capable of hacking. And how she found Bourne is not explained any kind of depth.

As for Bourne himself, these days he supports himself in a Fight Club kind of atmosphere and the his latest match is near the border between Greece and Albania.

Nicky tell Bourne that his own father was somehow involved with creation of Treadstone. And as expected Parson’s intrusion (hack) was detected. So off we go. 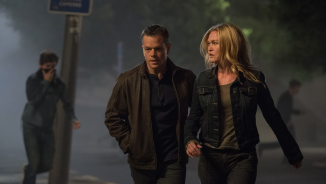 From this jumping off point it is another Bourne film which means Greengrass stuck to the formula. The film works quite well as an action/adventure. And by sticking to the formula, there were no surprises. As well as a distinct sense of this all seems so familiar. Including the shaky-cam aspects.

In Supremacy at the location known as Alexanderplatz, with its student protest march in Berlin became Syntagma Square in Athens where Greek citizens protesting,  often violently, the new Greek program of austerity. In each case, Bourne used the crowds as cover to make an escape. Below he has just taken Nicky off the tram at Alexanderplatz. 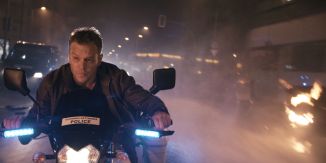 Or An unbelievable motor chase that we saw on the streets of Paris (Identity) and then in a tunnel Moscow (Supremacy) becoming a parking garage in Las Vegas.

Tommy Lee Jones has replaced David Strathairn who replaced Brian Cox as the sharp end of the stick. Jones was kind of subdued here, yet he retains all his gruffness and craggy visage, that we’ve come to love over the years.

And Alicia Vikander has replaced Joan Allen as the Bourne antagonist/supporter. Alicia Vikander may been cast in this key role just as a marketing ploy to attract some younger female viewers, and although she wasn’t bad, she didn’t look old enough, or seasoned enough to be running a CIA Operational Control Room like Joan Allen’s Pamela Landy.