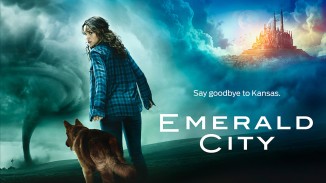 Yes, it is a re-imagining of The Wizard of Oz, the beloved 1939 version of the Frank L. Baum story that starred Judy Garland, Bert Lahr, Ray Bolger, Frank Morgan, Jack Haley, Billie Burke, and Margaret Hamilton.

The story starts up so quickly with Dorothy, as a nurse working in a hospital in Lucas, Kansas. It is the present day. First she steals some medication, (for someone else – Dorothy is no druggie). Then she turns down an offer a dinner with a doctor and rushes home.

Or it may have happened in the reverse order.  By the time she gets home. the dark skies have become quite threatening.

As the tornado touches down, Dorothy takes shelter in a parked police cruiser, not realizing that there is a German Shepherd K-9 police dog in the back seat. Of course this car is swept up into the vortex of the tornado. There are no knitting grannies or cows sailing by in this tornado to be seen.

As expected the police cruiser crashes down and kills a witch. No, this is not Munchkinland. And there are no Ruby slippers – instead there are a pair of ruby gloves. Rather we’ve arrived in the territories of the Tribal Freelanders, likely a nomadic tribe living off the land. 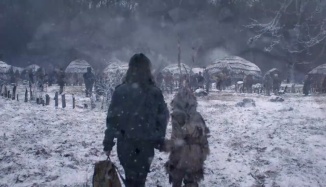 Dorothy is led by a pack of scruffy children (a mild reference to the 1939 Munchkins) to an encampment.

There she’s given her marching orders. Rather than being killed by these warlike people, she will be walked to the border of the Tribal Free Lands by a guy. Then she will cross the border and proceed on her own, with the new Toto – the K9 police dog, to Emerald City. She’s told that the Wizard there might be able to get her home.

The yellow brick road is still there but only now it appears as an unpaved roadway, or a plain dirt and dusty road if you like.. Of course the first person she meets is the new Scarecrow. He’s not just hung up on a pole, with the crows totally indifferent to him. No, this time, he been strapped down and barbed-wired onto a cross. And the crows are still totally indifferent towards him.

Dorothy gets him down off the cross and though he’s in bad shape physically and mentally, she gets him up and on his feet. He can’t remember his name, so Dorothy calls him Lucas. 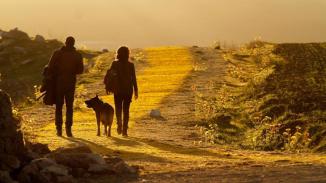 And off they go.

At this point I should tell you that (at least in the first two episodes) there’s less of the Baum tale of Dorothy’s Odyssey to Oz than you might have expected or hoped for. Things seem to go off on different  directions and tangents, and many of those story threads that we see are either unexplained or lack coherence with what we’ve seen so far.

First let’s talk about the titular Wizard of Oz. Here the wizard is played by Vincent D’Onofrio. But to issue fair warning – when we first see him, he looks more like Robbie Coltrane‘s Hagrid from the Harry Potter films.

However before the first episode is over, we see the Wizard, when he’s back in his private chambers, he will remove his wig (the one atop his head). At first sight of him, I thought that he was wearing a wig as a character contrivance. Which is indeed the case. And I will also cast my ballot toward the beard being a fake as well.

Glinda the ‘Good Witch’ is portrayed by Joely Richardson, but she’s involved in some sort of sisterly warfare with her sister, the Black Witch  (um…the Margaret Hamilton role), played by Ana Ularu. I can’t give you more details about this as it seems both extraneous and of little interest for we viewers.

Now you might be thinking of the famous flying monkeys from the 1939 film. I did notice one monkey like image but he was some sort of mechanical image projector (maybe this is a stand-in for a crystal ball) – think of something like a movie projector.