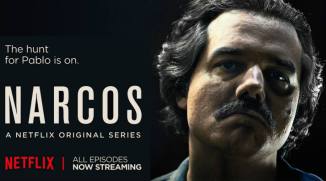 Netflix rolled out the second season of Narcos just last Friday, September 2nd. I took my time, meaning I stretched out the watching of the series over five days, concluding the 10th and final Episode by late afternoon on he 6th. I think the best way to get you interested is to show you the trailer right now.

If you had watched Season One of Narcos you know that the season ended with the drug-lord Pablo Escobar making a deal with the government of Colombia. He would construct a prison for them, paying for it himself, and he agreed to this self-styled version of being incarcerated. They called the place La Catedral.

Well it seemed that rather than being in jail, living under the commands of jailers, and doing what is called living-without, the reality was that this was nearly a four or five-star hotel.

Escobar lacked nothing either in foods, comforts, tv’s, or even communicating with the outside world which meant continuing to do business. Both the Colombian government and Escobar’s competitors began to question this incarceration. Despite checkpoints and blockades heading into this ‘prison’, Escobar’s truck deliveries managed to avoid the interdiction and so, the goods made their into the prison, and Escobar was able to ‘enjoy’ life there.

As Season 2 begins, the government planned a huge assault on the prison and it began well. But the slippery Escobar virtually walked out of the prison unscathed. In an encounter in the surrounding forest, Escobar virtually dared the squad leader to take action, otherwise he would continue on his way home.

Fearing repercussions later, the sea of soldiers, parted, and Escobar and his associates just walked on through.

And that was the just beginning of the second season of Narcos. If we can state that season one was the rise of Escobar, season two was certainly all about his fall. That’s not a spoiler as Escobar was an all too real drug lord and murderer. In fact, on his instructions, a shopping area in downtown Bogotá was car-bombed. 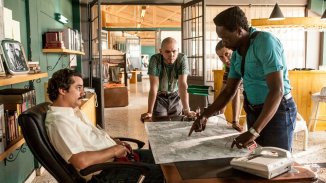 This is in addition to out-and-out assassinations of cops, politicians, and rival cartels in the drug business. 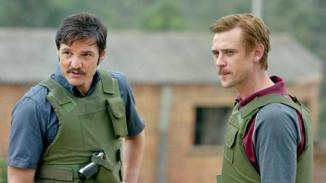 So you knew there was going to be payback. With the Colombian government avid to get him to surrender, the DEA poking around and calling it ‘advising’, as well as the CIA doing what they could clandestinely. Escobar really didn’t have a chance.

His fate was all but sealed when one of the DEA agents assigned to capture him started to work covertly with the Cali Cartel via Judy Moncada (below).

The opposition cartel set up a death squad or hit team to systemically eliminate anyone who either worked for Escobar or helped his efforts. They were known as Los Pepes. If you described them as brutal you’d be describing them in a kindly way.

Their stock in trade was not just to take out Escobar’s associates and allies, but to make the killings as public as possible. Bodies were left in the most conspicuous of places all bearing signs that stated : This is what will happen to you if you help Pablo Escobar.

But the government had their own Death Squad too. This was called the Search Bloc. To get information on Escobar’s whereabouts they would put the squeeze on all of Escobar’s carefully planned network of scouts, spotters, and watchers. Their job was to radio ahead when the Search Bloc trucks and jeeps loaded with uniformed men with weapons would leave HQ.

Some of the watchers and radio men were really just teenagers and some even younger. Escobar had a reputation (when things were flush) of giving out money. All for the purpose of enhancing his reputation as a Robin Hood-esque kind of drug dealer.

But the Search Bloc was desperate to capture or kill Escobar, so they didn’t even think twice about executing the ones who wouldn’t talk.