First there was the 1940 film Boom Town.

Two buddies, down on their luck, rise from being fly-by-night, seat-of-their-pants wildcatters to oil tycoons over a twenty year period. Clark Gable and Spencer Tracy played Big John McMasters and Square John Sand. For Gable this was his second biggest grossing film after Gone With the Wind.

Flash forward to 1978. Now we get a TV series called Dallas, with Larry Hagman starring as J.R. Ewing, a Texas oil-tycoon and cattle rancher. This series was Texas oil at its back-stabbing worst. A soap of opera of enduring fascination. It seemed to run forever. 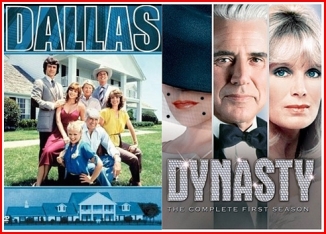 Following in the wake of Dallas, a few years later, in 1981 , we got the ABC TV Series called Dynasty. John Forsythe starred as the Denver oil tycoon Blake Carrington. This was Dallas all over again – only in Denver, and with better and fancier clothes on the cast. Linda Evans and Joan Collins were the pretty ladies involved.

Each of those series ran for multiple seasons and following them – there was kind of a dearth of family dramas surrounding oil tycoons. But that all ended this past Sunday night when ABC rolled out its new series called Blood and Oil. At the top of the cast is Don Johnson as Hap Briggs. 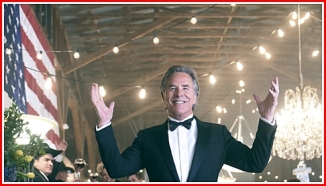 This series is set in North Dakota – and you can think of it this way – Miami Vice‘s Sonny Crockett has grown older and now, instead of driving Lamborghini’s while posing as a flashy drug buyer/dealer in Miami in order to take down other criminals, Crockett has become Hap Briggs. Now Briggs sits at the top of the oil heap in the Dakotas.

He’s got a wayward son called Wick, and a trophy wife called Darla. Briggs seems like a decent sort, but he’s not all that popular with the town’s working folk.