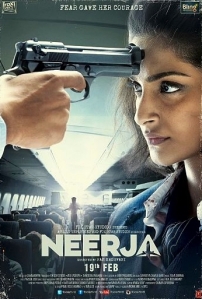 It is early in the morning of September 5th, 1986. If you had booked this flight, Pan AM 73, likely you were unhappy about the departure time, but since you’d bought the ticket, you had no choice but to be prepared for the 4:00 AM takeoff from Sahar Internationall Airport which was Bombay’s primary international airport at that time.

The flight was scheduled to stop in Karachi, Pakistan, then Frankfurt, Germany, before heading on to JFK Airport in New York.

The film is called Neerja, and was released just a few months ago in mid-February. Neerja is a reference to Neerja Bhanot who was the head purser on Pan Am Flight 73.

As the film opens, we are going to see, via cross-cuts, two separate and ongoing events occurring in real-time. The first is to introduce us to Neerja, played by Sonam Kapoor.

She is a lively and spirited woman, just 22, with a birthday just a few days away. She’s been working with just some success as a part-time model doing print ads and TV commercials, and she has navigated her way up the ladder for Pan Am. This flight, Pan Am 73 will mark her first flight as Chief Purser.

She was more than that. She had left a horrendous marriage because her husband had verbally and physically abused her as they lived in Doha in Qatar. This was noteworthy as most Indian brides do not return home from a difficult marriage.

While Neerja’s mother, played by veteran Indian film actress Shabana Azmi, was not thrilled by her daughter’s breaking of tradition, Neerja’s father called her heroic.

Meanwhile, in Karachi, we watch as a small group of terrorists also prepare for Pan AM 73. Their plan was to dress and pass themselves off as Pakistani Airport Security. They intended to board the plane from the tarmac, then in a classic high-jacking, meaning at gun-point, force the pilots to take them to Cyprus where they would barter the lives of the passengers and crew in exchange for the release of their countrymen from a Cyprus prison. Though we didn’t know it at the time when we met them, they would turn out to be Palestinians rather than Pakistanis. 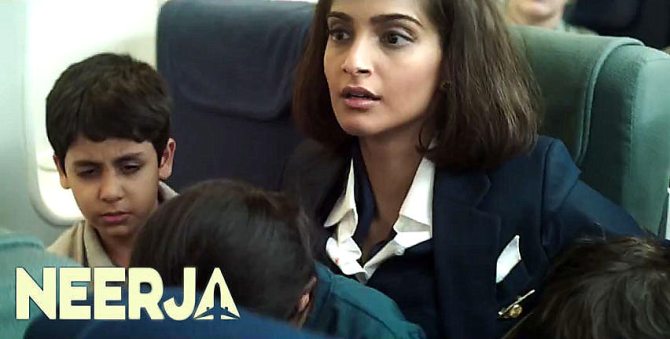 Well, we stay with the concurrent stories. Neerja is loved by her family, and is wonderful with kids. The terrorists strap on their gear. Neerja is driven to the airport by her current boyfriend. The plane is boarded in Bombay. Counting passengers and crew the total is 379 people aboard the flight.

Pan Am 73 departs Bombay on time, and an hour and half later touches down in Karachi. Soon enough, the terrorist are on board brandishing weapons. Eventually, the news reaches India. Azmi, as Neerja’s mother calls her husband to tell him that she has had a ‘sinking feeling’.

The husband and father, Harish Bhanot, played by Yogendra Tikku, gives his wife, the bad news.

The rest is, as they say history.

Neerja Bhanot was a real person, and this film is based on the story of what happened on board the plane. Since this actual flight was 30 years ago, it is quite likely that what was said and by who are more likely imagined than actual fact.

But it doesn’t alter the fact that 379 people left Bombay on Pan Am 73, and when the smoke cleared 359 got off the plane alive. Neerja Bhanot did make it back to Bombay. Unfortunately, she made her last flight in a coffin.

As a film, I have to give the writers a lot of credit, but the direction by Ram Madhvani was superb. As for the acting, Sonam Kapoor has given us her best performance ever. Sparkling in the role of Neerja’s mother was Shabana Azmi. Azmi now plays older characters but back in the 70’s and 80’s she was a huge star in both commercial films and India’s art films which back then were called ‘parallel cinema’.

This film is about bravery, courage and sacrifice. It is about overcoming fears. It is a taut and exciting film filled with tension and stress. And best of all, this film packs a strong emotional wallop.

This movie has drawn mostly very strong positive reviews. The movie was made for about 3 million in US dollars and has already grossed more than 20 million.  I watched the film via a DVD which I purchased on eBay.

My overall opinion is that Neerja is one of the best films from India that I have watched this year. I give the film a hearty and strong recommendation. I will give the film a four point five rating on the one to five scale.

Additional Notes: The on-board segments of the film were shot in a studio constructed set of an actual plane. It took the studio 48 days to build it. Of the terrorists, they were convicted and given death sentences, which were later commuted to life sentences. The US applied for extradition, and one of the terrorists, Zaid Safarini is currently incarcerated and serving a life sentence in a US federal penitentiary in Terre Haute, Indiana.