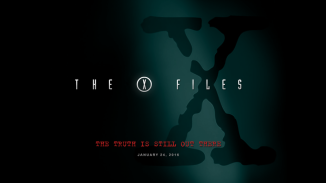 Regarding UFOs and extratrerrestrials: We must ask ourselves –

Are they really a hoax?
Are we truly alone?
Or are we being lied to?

The Truth is Still Out There. At least that is what they present as fact. They also don’t lose any time pulling the tarpaulin away to reveal what is more than likely an immense conspiracy.

So begins the X-Files. Make that the return of the X-Files. This is Season 10, and the Seasonal Debut aired on a few days ago on Sunday on Fox. The Second Episode aired Monday night. but I’ve not watched it yet. By the way, did I mention that Season 9 of the X-Files broadcast its last episode on May 19th, 2002.

So according to some – this was the last show that needed to be brought back, Others, specifically fans of Gillian Anderson and David Duchovny could not be more pleased.

Fox Mulder and Dana Scully are played respectively by David Duchovny and Gillian Anderson. They slide effortlessly into their roles – about as easy as putting on your favorite jacket. For Mulder it almost seems a tad too easy.

Anderson was only 25 when she took on the role of Scully back in 1993. Her eyes are just as beautiful and just as piercing and direct now, at age 48, as they always were.

As for Duchovny, he’s now in his mid fifties. And it shows a bit. Though not so you’d mind, He’s avoided the middle age paunch but has sprouted more than a few grays in his scruffy, or intentionally unkempt appearance, at least initially.

While Scully has had a career in medicine since the FBI shut down the X-Files, it is less clear as to what Mulder has been up to. When we first meet him, he seems to be living in something of a wooded and lonely area.

Other returnees are Mitch Pileggi as Walter Skinner (on the left), and William B. Davis (on the right) as The Smoking Man. While Skinner looks hale and fit, The Smoking Man is only a shell of his former self. He now still smokes, only not through his mouth, but rather through a reinforced hole in his throat. 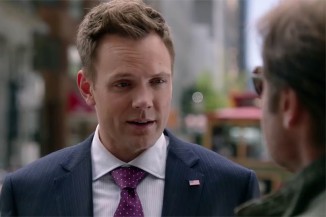 While the opening episode was more than a bit ‘talky’, a necessity to get us caught up with what has happened in the 14 years while every one was away, as well as to introduce a TV Talking Head called Tad O’Malley who is played by Joel McHale.

Now this O’Malley character is out to make a big name for himself. So, yes he has an agenda to push. Scully is not all that anxious to strap on the X-Files again, especially since the FBI had shuttered the door of the X-Files.