It was the day after Christmas, and the 10:15 AM show played to a packed house in Sarasota, FL. Such is the drawing power of Les Miserables. The film, directed by Tom Hooper from the beloved theatrical musical of the same name, an adoption itself of the Victor Hugo novel, opened on Christmas Day. 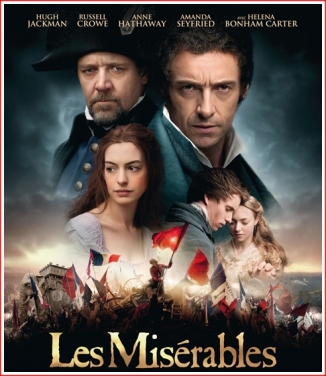 Claude-Michel Schonberg’s music with lyrics by Alain Boubel was first performed theatrically in Paris in 1980. The show closed after a three-month run. In 1983, theatrical producer Cameron Mackintosh was asked if he’d be interested in bringing it to the stage in London. It took two years for the English language version (lyrics by Herbert Kretzmer) to reach London audiences. It opened on October 8th, 1985. As they say, the rest is history.

The show has been performed in forty-two countries, and has been translated into 21 languages. But I am not someone who has had the good fortune to have purchased a ticket (60 million have been sold) to see a theatrical production of Les Miz. As such, I really didn’t know much about it at all. I hadn’t read the Hugo novel either. But I did see a bit of the Les Miserables 25th Anniversary Concert from 2010 when it was broadcast on the televised PBS fund-raiser here last month. I knew the film was scheduled for release on Christmas Day, so I turned off the show after only seeing one or two songs. However, I was hooked and committed to seeing the new film version at the earliest.

As the film opens, we watch a mighty struggle by the forced laborers (convicts) to tow a huge sea-going vessel into a dry dock in Toulon, France. After, the convict # 24601 – Jean Valjean – is granted parole, and freedom, we will later come to understand that he will never be completely free from his jailer, Javert, who promises Valjean, that if he doesn’t follow the letters of his  written parole document completely and exactly – Javert will be there to toss him back in prison. Javert offers a chilling reminder: Do not forget my name, do not forget my face. As Valjean departs, the prisoners sing Look Down, all under the watchful eye of Javert. That along with the film’s stirring closing shot of thousands of Parisians on the ramparts, enables us to say that the film is book-ended by images stunning in scope.

There was another magisterial shot of Jean Valjean standing on the top of a promontory overlooking the sea that begins with the camera at his level and then we soar far above him by means of a seventy foot crane shot followed by a seamless transition to a view of the same from a rising helicopter. Yes there were these amazing shots to take your breath away.

But most of the film is shot with the scale down to human levels. And often in tight closeups during many of the songs. Now this particular directorial decision to shoot closeups of the singers has brought forth discussion that has been quite strong both in praise and condemnation. When you see a show in person, you don’t always get a seat in the orchestra level – sometimes you are in the ‘alpine’ regions of the balcony, and you have no chance at all to see facial expressions.You hear just fine, but the distance from the vocalists is not kind, even with opera glasses.

If you have dealt with being seated so high up that cannot visually distinguish the singers’ faces then you know what I’m saying. So Hooper brought his lenses up close and up tight. But that was criticized as well – the faces were not centered, the upper foreheads and/or chins were cut-off. Given that Hooper also decided to film the songs live as opposed to the actors lip-synching to prerecorded music, this was bound to happen. However this decision allowed the actors to have more creativity in their performances. But this is also risky as tight shots may often be too close, and when the singer turns his or her head, the cameras may find themselves slightly out of position.

But I think that the pay-off of the closeups makes the songs all the more powerful. Why concentrate and make mention of a few less than stellar angles? When you see Anne Hathaway’s pain and anguish as the doomed Fantine, when she sings I Dreamed a Dream, you will truly understand the term ‘show-stopper’. Hathaway gave everything she had in this song. She held back nothing. It was a bravura performance.

END_OF_DOCUMENT_TOKEN_TO_BE_REPLACED

With the Oscars Awards Night only about a month away, and coming closer and closer with each passing day, I’ve decided to take a more active interest in the Oscar contenders. In the Best Picture Category, I’ve already seen half of the list:

Since The King’s Speech was playing at the AMC multiplex, just  three minutes away by car, I decided to add this one to my list of Best Picture contenders that I’ve not only seen, but also reviewed. So without further preamble:

I’m going out on a limb right away – first, Colin Firth seems to be a shoo-in lock for Best Performance by an Actor. Geoffrey Rush could walk away with the Supporting Actor award. The screenplay award – for a script expressly written for a film, is also possible.

As for Best Picture, The King’s Speech appears to be gathering momentum. To be honest, I had reservations about this film, or more accurately, this kind of film, capturing the hearts and minds of the Academy voters.

But that was before seeing the film.