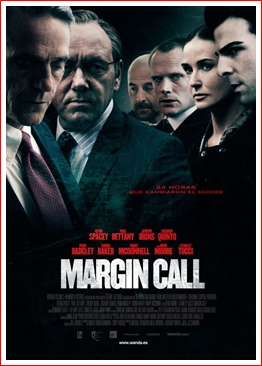 David Denby, writing for New Yorker Magazine has labeled J. C. Chandor’s debut film, Margin Call, “… one of the strongest American films of the year and easily the best Wall Street movie ever made.” High praise indeed from one of the most widely read and esteemed film critics. Yet this film opened today in what was called a ‘limited release’.

That would mean that this film is opening in just 17 states, and here in Florida, the film is playing in just one theater, in the entire state, in a town called Maitland, somewhere northeast of Orlando. Google says it is 138 miles from my home. With gas prices hovering around 3.50 a gallon, driving that far and back to see the film would add about $50 to the cost of my ticket.

Think about that – just one theater in the entire state of Florida and playing in just 17 states. Well, the good news is that the film is quite good. The bad news is you might have to wait awhile to see it. Unless you have ‘on-demand’ via your cable provider.

I think the producers are going to have more copies of the film made and distributed. On the other hand. maybe folks won’t be all that interested in seeing what happened to their retirement nest eggs, which vanished overnight in some cases. But I won’t spend any more time discussing the harsh realities stemming from the events of the market crash in 2008, because we all know or knew someone, or we were/are actually victims ourselves. So let’s not talk about what happened in real life, instead let’s talk about the film.

I think the best way to discuss the film is to describe some of the performances by the actors, and even more importantly to describe what it was like to watch the film. Shortly after the film begins we are told that 80% of the traders and their support staffs, in an unnamed financial services firm, are going to be let go that day. Grim and stony-faced HR folks march in and set up in a conference room. People are asked to come in. They’re given the bad news, along with the size and the amounts of their severance packages, and this gentleman – they point to a security person – will escort you to your office where you will leave everything as is taking only your personal belongings. Which leads to the long and cruel walk to the elevators with your boxed possessions. This is the beginning of the film, and from there – it only gets worse.

I personally have seen what I just described in person – but when you watch it in Margin Call, from the safety of your own den, living room, or theater seat, you will be thankful that you are safely distanced from the what you are watching. Then again you may not be safe at all. But while watching, I felt as if I dare not blink or close my eyes – lest I miss something.

Stanley Tucci as Eric Dale, is one of the first to go. He’s a sympathetic figure as a mid-level manager handling risk assessment. He receives his bad news with a certain stoicism, but you know from the gravitas of his facial expressions that this is serious stuff for him. He’s been in the business 19 years. When he hits the street and stops for a moment to call home – he finds that the cell phone (provided by the firm) no longer works.

They had told him as much upstairs – no computer access, no emails, no phones – but he had forgotten. It was a startling and electrifying change of mood, when he hurled his phone to the sidewalk in frustration – all the more remarkable because of his previously shown calmness and strength when he was told to pack up and leave.

Dale’s boss, Will Emerson (played by Paul Bettany) has survived. We aren’t quite sure of what he does, but he was Dale’s boss, and now two of the younger risk analysts that reported to Dale now report to him. He makes big bucks, drives an Aston-Martin, and wears a rich navy blue suit. As portrayed by Bettany, he comes off as a guy who likes living on the edge, someone who never met a party he wouldn’t go to, and he was something of a player who later confesses that he made 2.5 million in the previous year. And out of that he spent more than 75K on hookers and drinking. Yet Bettany (below) gives him a decency that makes you respect him if not actually like him. 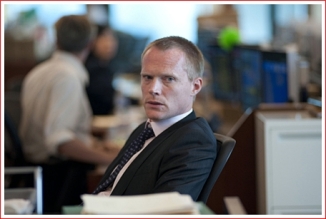 END_OF_DOCUMENT_TOKEN_TO_BE_REPLACED

It’s often crude and it’s often lewd. They talk about things in the film that you wouldn’t discuss at your family dinner table. Stuff happens and things are said in this movie that magazine  and newspaper movie columnists can’t describe on their pages, or TV film critics are unable to repeat during an on-the-air broadcast review. This film is an equal opportunity abuser – fat people, blacks, gays, dentists, even the cops all come off looking bad or are served up as a part of a joke or a reference in the film. On top of all that – and despite all that I’ve just told you about the film, Horrible Bosses is hilarious.

Let’s set up the opponents:

Jason Bateman is Nick Hendricks. He’s been at this firm for 8 years. He works for Kevin Spacey who plays Dave Harken. Harken trots around in pin striped vested suits, gold power ties, and his ego and power know no boundaries. As he says to Nick, ‘I own you. You’re my bitch. I can crush you any time I want.’

While Bateman does Bateman which isn’t new, he’s quite good as the moral center who tries to keep a tight reign on his more excitable partners, but he’s also a person who can’t escape his current job dilemma. Harken has promised to trash him unmercifully if asked for a reference. Spacey on the other hand hasn’t been this deliciously hateful since he played Mel Profitt to Ken Wahl’s Vinnie Terranova in the TV series Wiseguy.

Charlie Day plays Dale Arbus. He’s a dental technician, he’s happily engaged, law enforcement has hung an unfair label on him, and most of the time at work – he has to fend off his boss Dr. Julia Harris, D.D.S. – a sexually voracious man-eater both literally, and figuratively.

In this role we have Jennifer Anniston, who simply aces this role which crossed into uncharted territories for her as an actress. She’s hot for Charlie, or any male with working apparatus, and for Charley, simply being in the same room with her is nearly a compromising situation. 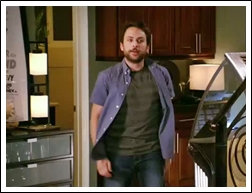 Jason Sudeikis appears as Kurt, the last of the belabored trio of guys who hate their bosses. He’a decent guy, good at his job as the firm accountant – his weakness is that he has an eye for the members of our population who wear skirts. Kurt works for the Pellitt Chemical Company headed up by Donald Sutherland, who is a sweetheart of a boss in his brief cameo. But Sutherland punches out rather early and definitely unexpectedly, and the company is taken over by his slacker/playboy/druggie son Bobby Pellitt who’s role is played by Colin Farrell. Farrell is almost unrecognizable (with his elaborate comb-over ‘do’) and he doesn’t get a lot of screen time. On his first day as the new Company president he orders Kurt to trim the fat on the payroll – by firing all the fat people. He’s a real tool. He’s also called an asshole.

First, she's sucking on a popsicle, then a banana, and finally a hot dog ...

There’s your opponents for this film-ic scrimmage. Our three mice, umm,  heroes – meet for drinks and somehow they hatch an idea to kill their bosses, or more accurately, they decide to hire someone to do it for them. A google search leads them to some-one who uses the term wet-work in his ad. Dale says this is a code word for blood will flow, and is used in the assassination trade.

But it turns out, that this some-one is not exactly what the boys wanted either, so cue up Jamie Foxx’s entrance. While Foxx as Dean ‘MF’ Jones (take a wild guess as what the MF stands for) portrays an outwardly unsavory ex-con – he’s not the one to do the “wet-work” either. But he strikes a deal with our boys.

And I mean that. Our boys are neither killers, nor are they even close to being capable of doing the deeds. Scripted by a trio of screenwriters that sounds more like an LA law firm – Markowitz, Daley, & Goldschimdt and directed by Seth Gordon – this is really a funny movie. It has all the hallmarks of a frat-boy joke fest with its dependence on some light slapstick humor, with some often puerile and scatological references, and abundant sexual references that are smartly  crossed with some old and iconic Alfred Hitchcock movie murder strategies.

Factor in superb performances by Anniston and Spacey, and I think you’re going to have a hit on your hands, because with certainty I can report that it all works. It may not be sophisticated or clever but  I lost track of the number of times I LOL’ed (that’s laughed out loud). Once the word-of-mouth gets out – and the Transformer crowd (read younger) and the Larry Crowne crowd (read older) search for follow up films to see – it’s going to be this one.

Yeah, that was what Jack Abramoff said in the film, Casino Jack, a film about the life and times of one’s of Washington’s biggest and most influential power brokers. Jack was real and he was a lobbyist. Make that super-lobbyist. In another movie about movers and shakers, Jerry Maguire, a sports agent extraordinaire – someone said, Show me the money! Well Jack Abramoff not only wanted to see the money – but he kept as much as he could for himself, until John Q. Law caught up with him after Jack’s associate Michael Scanlon ratted him out to save his own sorry ass.

For his crimes, the real Jack Abramoff did a 4 year stretch between 2006 and 2010 in the federal minimum security penitentiary at Cumberland , Md. Directed by the late George Hickenlooper, this is a dramatic/fictional representation about Jack Abramoff. This is no documentary – the title card states “inspired by true events.’ Nonetheless – it plays like one – almost – names are named, and I mean names that went all the way into Washington’s heart of hearts. I mean even into the Oval Office. Kevin Spacey was cast as Jack, and dang, he not only stole the clients money as Jack, but he stole the film while acting in the role of Jack.

This was a bravura performance by Spacey who is clearly one of America’s finest thespians. And speaking of acting, Jon Lovitz, who nearly made the single word ‘acting’ into a personal trademark while he portrayed Master Thespian as a member of the Saturday Night Live TV show, is on board in Casino Jack too. He plays a striving, overreaching, wanna-be playa – Adam Kidan, Jack’s partner/front man in a very shady deal. Only he doesn’t tell Jack about his bankruptcies, or his mob connections in St. Martin and New York, and his predeliction for nose candy, 4200 square foot apartments, and blonde hookers – two at a time.

Barry Pepper, Graham Greene, Spencer Garrett, and Kelly Preston round out the main players in the cast – Pepper plays Michael Scanlon, Abramoff’s sleazy associate, Greene plays the Indian chief who trusted Abramoff to lobby for his tribal casino venture which ended up costing the tribe millions and millions, Garrett stars as Majority Leader of the House, Congressman Tom Delay, and Preston plays Pam Abramoff – Jack’s wife. All perform quite well. 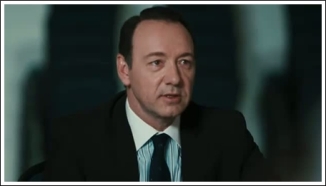 You want to kick some ass on The Hill , we can do that!