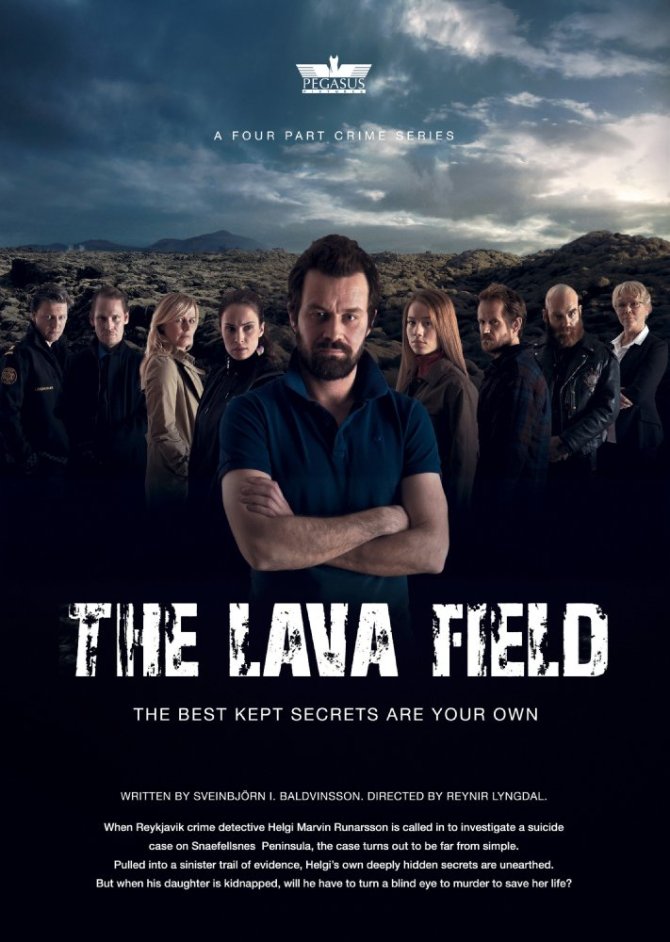 I’m just thinking out loud as well as wondering. How many times have you said to yourself, I’d love to visit Iceland, maybe stay in Reykjavik for a few days. Then take a drive out to the Snaefellsnes Peninsula and see the lava fields.

I must admit that although I am a world traveler, I’ve never harbored those thoughts. Well if you watch the 4 part 2014 TV series – The Lava Field, which is now airing in Netflix, you can find yourself enmeshed in a murder case in the very same Snaefellsnes Peninsula, and you won’t even have to leave your sofa.

You will be joining Detective Helgi played by Björn Hlynur Haraldsson, 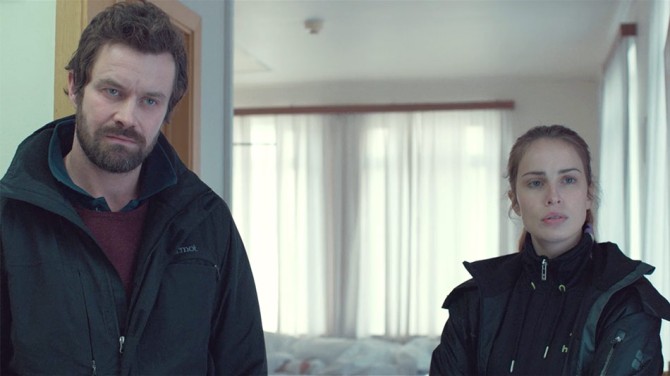 and his rookie partner, Greta who is played by Heida Reed. 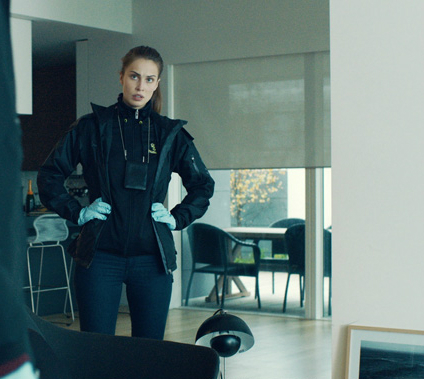 Helgi is a former Reykjavik homicide detective and he’s been summoned out to the Snaefellsnes Peninsula which is in western Iceland, and is the same area where he grew up. And still is troubled by an event that happened to him long ago.

He is divorced and had two children with that woman who still lives in the area. One of Helgi’s children died at an early age., So that leaves us with a troubled detective whose past washes over him every day that he is in Snaefellnes. 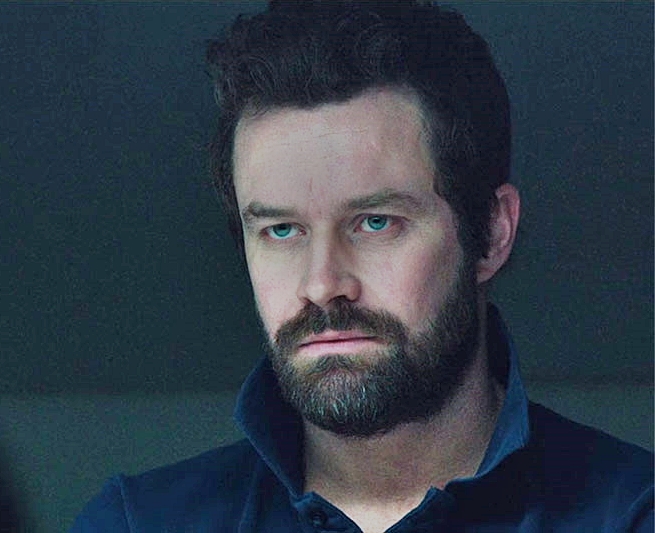 His partner Greta, is a young rookie detective, fresh out of detective school. She goes for layered clothing on top, and leggings for her lower half. She’s cute, perky, and wholly understands the effect she has on some men. That said, she surprises Helgi  – who as expected didn’t want her as his partner at the outset – with her sleuthing skills.

The show begins with a wealthy financier taking his own life in a swanky beachfront home. Or so it seems. 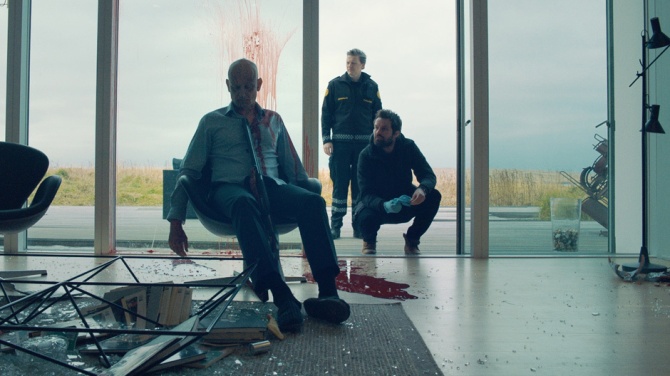 From there the story expands into financial misdeeds, drug smuggling, and as the cherry on the top – a young six-year-old child goes missing.

We will meet all of these folks as well as the brass at the local police station where Helgi is now working,  There’s the domestic issues with his ex-wife, another kidnapping, and a series of folks come into focus as suspects in all of the above.

Sometimes, the pace slows down to a crawl, and for me, there wasn’t enough action. But all the characters are interesting, and the dynamics between Helgi and Greta are intriguing.

But the biggest pluses of the show are the haunting and mysterious lava field where it is said that if you get lost there, in that lava field, you will never be found. The rest of Iceland is simply stunningly beautiful. And you will see plenty of the country side. Hardly any of Reykjavik itself. 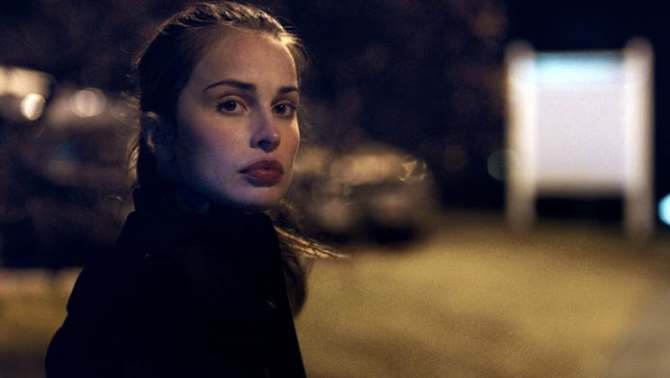 One might say that there’s a bit too much going on with the multiple plot lines – and even if that is true – the show is still captivating.

We never know what will come next. Will Helgi lose it and do stuff he shouldn’t resulting in the police brass taking him off the case. Will Greta be accepted as a first class detective? Will something happen between Helgi and the beautiful blond Medical Examiner? 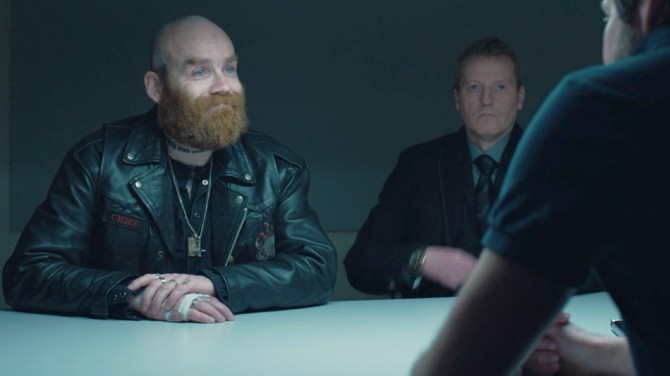 And of the bad guys there are quite a few. There’s this biker Captain who is scary enough visually that instantly you know that whoever is near him is in danger. That would be this guy in the leather jacket in the above image. 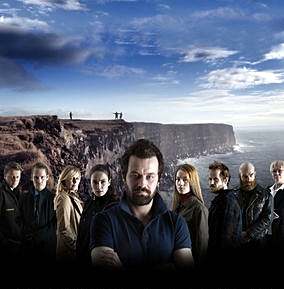 My overall opinion is that while the series is about a murder investigation and a whole lot more, and it doesn’t deliver us any nuances or variances on every detective series you’ve ever watched – it is still is fresh and new in many regards. Specifically, for me – the location and the actors and actresses.

There’s not a whole lot of English spoken, and to be sure, the Icelandic language is not easy on the ears. But the subtitles are excellent and you won’t miss anything due to the language barrier.

I’ll recommend the series, and give you a heads-up that four one hour episodes can be watched in, well, 4 hours. This is not a series that will take up a large amount of your time. It is well shot and there’s lots of the Iceland sights to see – from the blondes, to the mountains, the lava fields, and the spectacular coasts all wrapped around a compelling story.