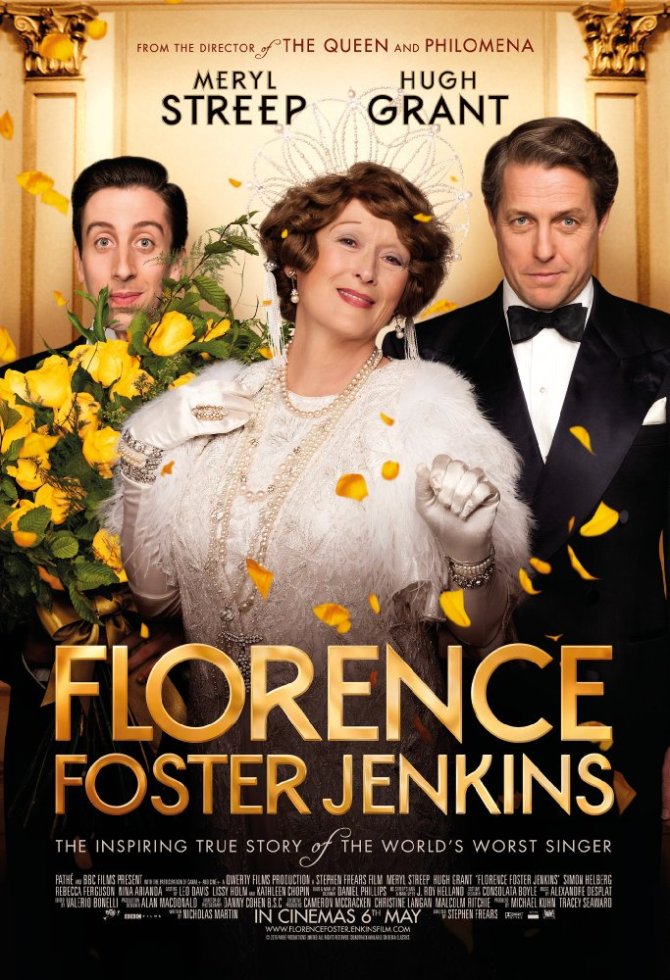 The request came in a post called Writer’s Block Ruminations. Marty is the author of the post and his blog is called Snakes in the Grass. He’s not talking about folks you can’t trust, rather his blog title is an all too true reference to the fact that in Florida you literally have to watch where you walk, because, for certain, you are going to run into actual snakes, who as we all know appreciate the hot weather in Florida and they don’t mind slithering along, or crossing the sidewalks that we humans use on their way somewhere.

Anyway – ask ye shall receive. I fired up my car and hit the highway which would be I-95 (Exit 109 – Port Wentworth, GA). I was headed to Hilton Head Island where I would see Streep and friends in an 11:30 AM screening at the Park Plaza Cinema, a small movie house but one that is equipped with the latest in equipment to play the new digital age movies and with deluxe leather reclining chairs.  It was an uneventful 50 minute drive, and there was no line for tickets.

I had seen the trailer for Florence Foster Jenkins and so I knew the bare bones of the story. A well-off society woman  was a New York heiress who dreamed of becoming an opera singer, despite having a terrible singing voice. And that blurb was even kinder than the one we got on the actual movie poster – The Inspiring Story of the World’s Worst Singer.

I’m not sure why, but my expectations were that FFJ would fall somewhere between  the classic anarchism of The Marx Brothers (A Night at the Opera) and  the social relevance of one or more of Preston Sturges‘s snappy and smart films like Meet John Doe or Mr. Smith Goes to Washington. 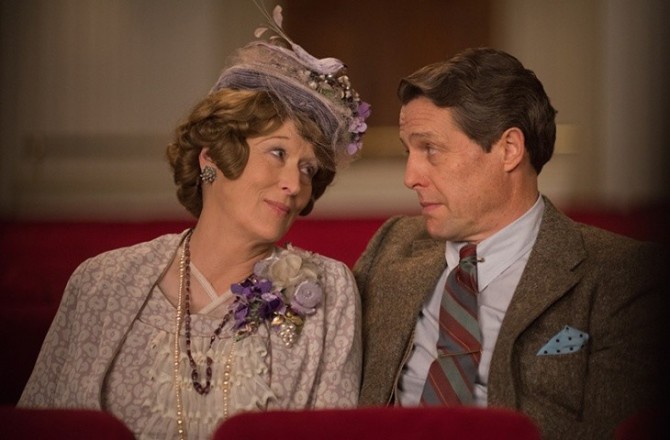 But Frears and his screenwriter Nicholas Martin took the high ground and the safe ground. The laughs did not come often because Grant and Streep played their characters realistically rather than in a stylized manner. The laughter would come from just two sources. 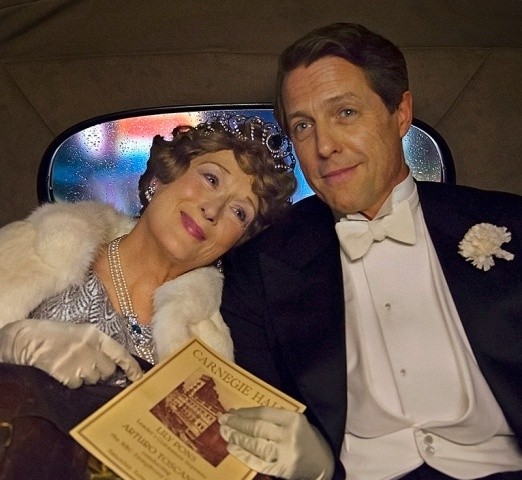 Helberg played Cosmé McMoon, an up and coming pianist who, for the stately sum of $150 dollars a week – almost a princely sum in 1944 – was hired on as Jenkins’ piano accompanist. 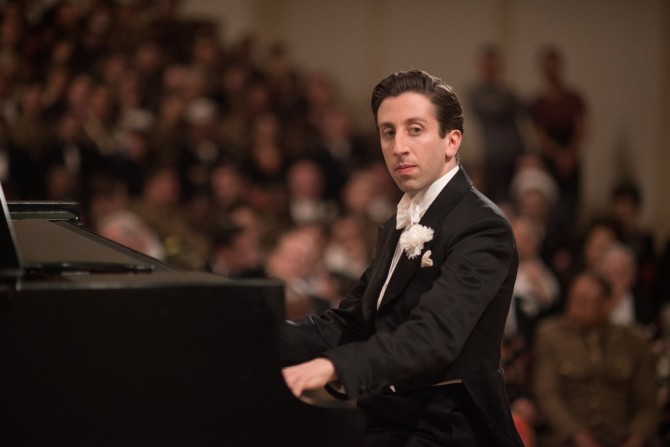 When he first sat down and worked the black and white piano keys, as Florence sang – a look of horror crossed his face which was then overtaken by a look of disbelief. Thinking he had signed on with a professional and accomplished singer, the thought that occurred to him right then was this – am I sabotaging my future as a musician by working with FFJ?  This would persist throughout the film.

The other was FFJ’s voice coach – one Carlo Edwards played by a terrific David Haig. He would be so effusive and positive when commenting on Florence’s vocalizations. That was the best yet, or you’ve never been better were decidedly non-complimentary compliments. But he was lying through his teeth. Which everyone in the room could see, and ditto for those of us seated in theater. Only Florence took his words as being sincere. 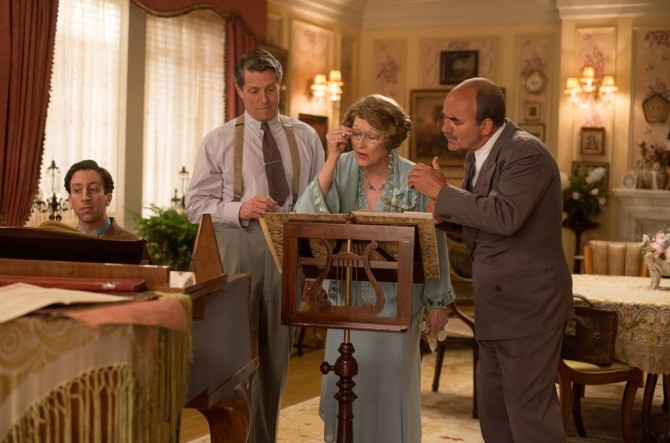 As a vocal coach for the Metropolitan Opera, Edwards definitely knew his business. But as he too had been hired by Jenkins’s husband, St. Clair Bayfield played by Hugh Grant, all Edwards could do was to follow Bayfield’s lead.  Bayfield never ever was anything but loving and supportive of his wife’s dreams and desires.

As she said, Music was and is my life. And after her gala one-night-only performance at Carnegie Hall, FFJ would say – People may say I couldn’t sing, but no one can ever say I didn’t sing.

But the reality was that she couldn’t sing. 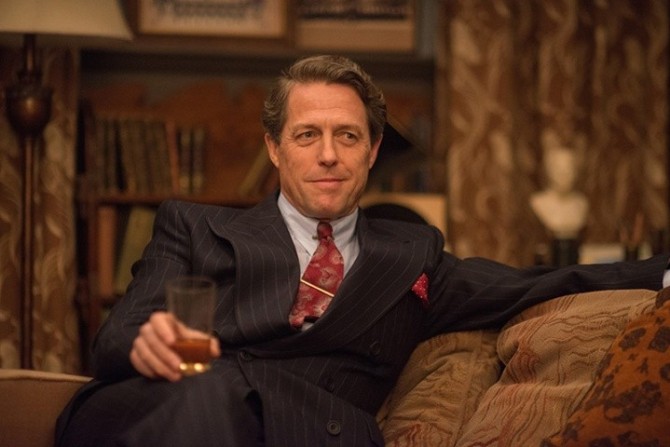 Now Bayfield was an actor who soon came to recognize that his name would not be adorning the theatrical marquees on Broadway. He was second-rate at best. But he didn’t struggle with it, trying desperately to rise to greater and higher status in that field. No he accepted his mediocrity and sailed himself in a different direction.

Bayfield and Florence had an understanding. She funded a separate apartment for Bayfield, and as long as he remained discreet, as in keeping up appearances and ‘no see, no tell’, the marriage continued to work. My thought was that Florence knew that a ‘golf weekend with the boys in the Hamptons’ was never about golf or the boys.

You see Florence and St. Clair practiced abstinence, at least between themselves. When Florence was in need of a visit from her doctor we got this conversation:

Dr. Hermann : Now Florence, do you have anything in your medical history that I should know about?
FFJ : Long ago, I contracted syphilis.
Dr. Hermann : When was that?
FFJ : On my wedding night. I was just 18.

A gift from the unseen Mr. Jenkins. And no doubt a contributing factor in keeping Bayfield and Florence not only in separate beds, but separate apartments as well. Now Bayfield kept up appearances but he also maintained a full relationship with his mistress Kathleen who is played by the lovely Rebecca Ferguson. 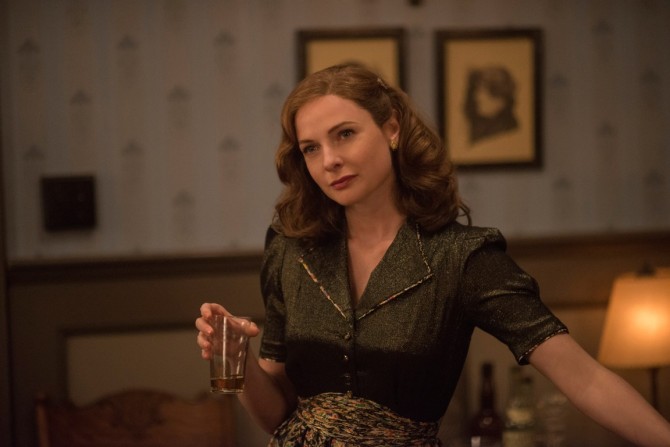 Of course while there was a certain amount of  farcical behavior, mostly by Helberg’s McMoon, things went along the specific route chosen by FFJ. She booked Carnegie Hall herself, and donated about 70% of the tickets to returning serviceman from WWII. Now this was a bit of problem for Bayfield. 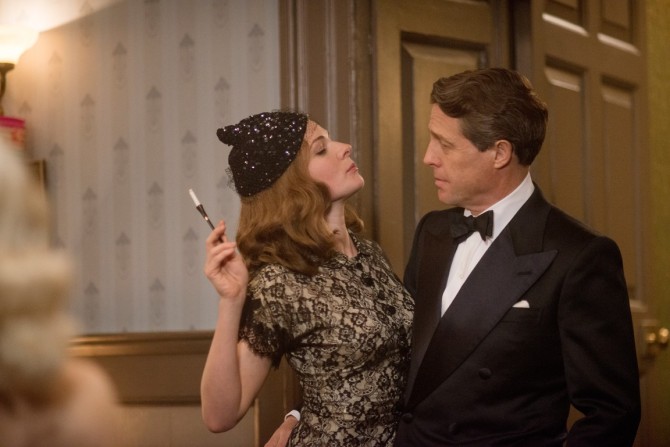 When FFJ sang at private soirees or in fancy salons for her friends, Bayfield could control or should I say limit the audiences to those he knew supported FFJ’s efforts. He would invite friendly (and on the take) newspaper critics, and not invite those who believed that FFJ’s vocals were someplace between screeching cats, and fingernails across the blackboard.

But the Carnegie Hall event got away from him. A New York Post Music Critic, who wasn’t the least bit favorable in his views about FFJ managed to get a ticket.

And so, to a packed house of nearly 3000 people McMoon and FFJ took their places on the Carnegie Hall Stage. And as they say, rest is history. 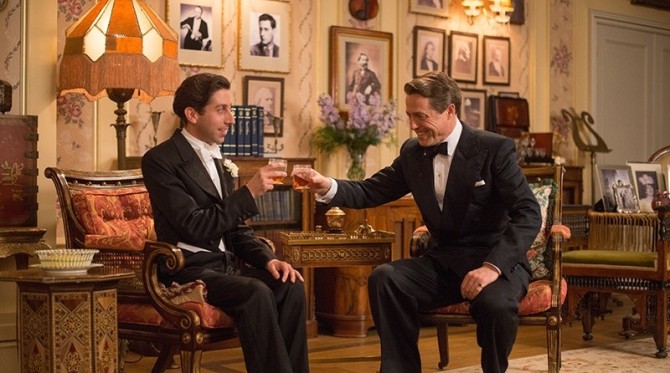 FFJ, Bayfield, and McMoon were all real people. While we can reasonably state that everything we heard spoken in the film may or may not have been actually said in real life, there’s no lack of documentation about this night. 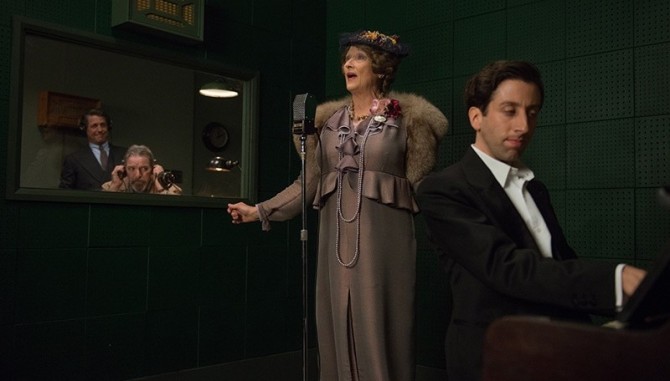 Kudos to Streep for taking on this role. She wore a fat suit beneath her garments to make her look more robust, or is it the word rotund that I’m looking for. One might say she resembled Margaret Dumont who was a foil for Groucho in so many of the Marx Brothers films. Only Streep’s FFJ was an older and definitely broader, or should I say a fuller-figured woman. 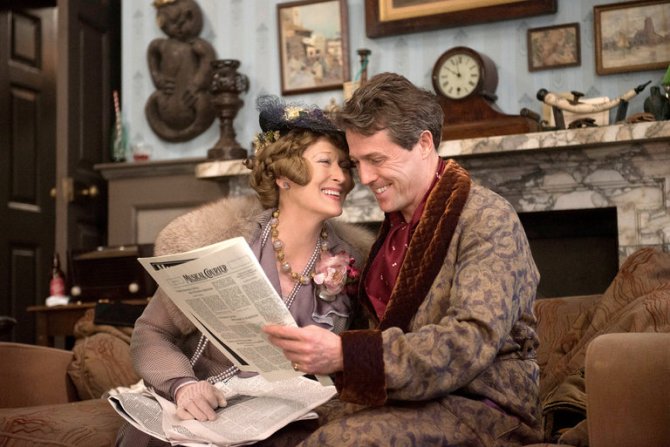 Hugh Grant shined as St.Clair Bayfield. He was perfectly charming throughout, and if I may say so – there’s not an actor on the planet who is better than Grant when it comes to perfect timing.. If one wanted to find an issue about Hugh Grant in this film, we might say that he had too much screen time. This of course was inescapable because when he wasn’t putting FFJ to bed every night – he was then off to party and play with Kathleen. 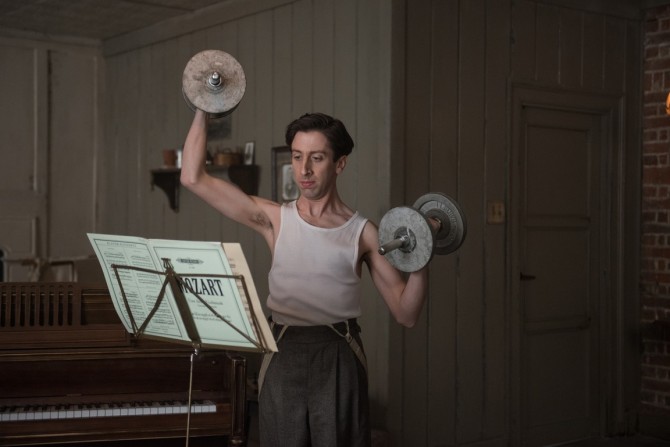 Helberg was masterful as the thin and young, unassuming, and nearly always on the verge of becoming a problem, as he attracted the wrong kind of people. And I’m not talking about women. But this role should lead to many more film roles for him, once The Big Bang Theory passes into history. 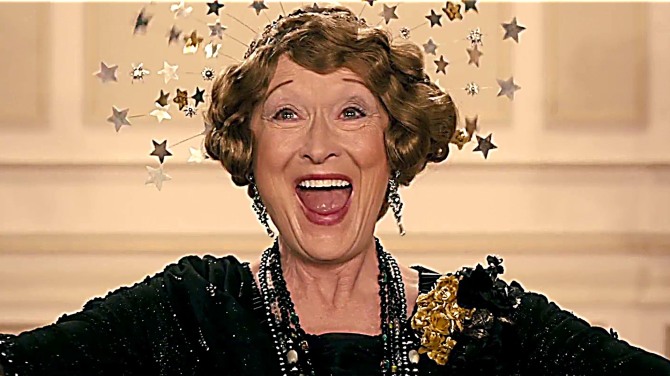 On the whole, the film was entertaining in a low-key way. The period elements (this was 1944) were done beautifully making the movie most pleasing on the eyes. Maybe I would have enjoyed it more if there was more humor, or more passion. And a wee bit less of Mr. Grant. But the key takeaways from FFJ are this – Even the biggest and most impossible dreams may come true, and second – sometime an ongoing series of white lies may at times, work out for everyone.

Three point five is the rating. Check out the trailer –

One thought on “Florence Foster Jenkins”