Her film career began way back in 1950. She’s won an Academy Award for Best Actress in 1960. She has starred in films with the greatest and best leading men in the history of films. In 1991 she was given an Honorary Oscar for he indelible contributions to world cinema.

She literally burst into the consciousness of American film goers in the 1957 film called Boy on a Dolphin.

Her leading man was Alan Ladd. Later in 1957 The Pride and the Passion hit the screens in American film theaters. Cary Grant and Frank Sinatra were her co-stars. 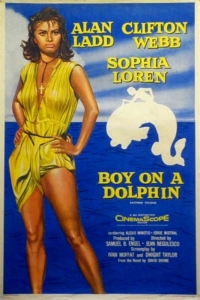 She starred with John Wayne in the 1957 desert adventure film Legend of the Lost.

Her name is Sophia Loren, and as 1957 ended, Loren’s film career had barely started, but was already memorable. That was nearly sixty years ago. Loren would go on to become one of the most recognizable film stars all over the world.

Here is a list of some of her notable films:

Now that is an impressive list of films, roles, and co-stars.

On this March 31st, Sophia Loren will be feted at the Sarasota Film Festival. She will be awarded the 2016 Legend Award. The event will be called An Evening with Sophia Loren.

This event, to be held at the Van Wezel Performing Arts Hall, here in Sarasota, will kick off the 2016 Sarasota Film Festival which begins on April 1st and continues through April 10th.

Here is a quote from the Van Wezel:

Synonymous with grace, beauty and artistry, Oscar-winning actress Sophia Loren will captivate you with an intimate onstage conversation and question-and-answer session as well as film clips from her prolific career spanning more than five decades. This legendary star earned a remarkable array of notable accolades including the first Academy Award presented for a foreign-language film with Two Women.

Have a look at some of Sophia’s best moments on-screen here:

However, if you want to see the real Sophia, in person, You may check out tickets and pricing for this prestigious event at the link below:

One thought on “An Evening with Sophia Loren”