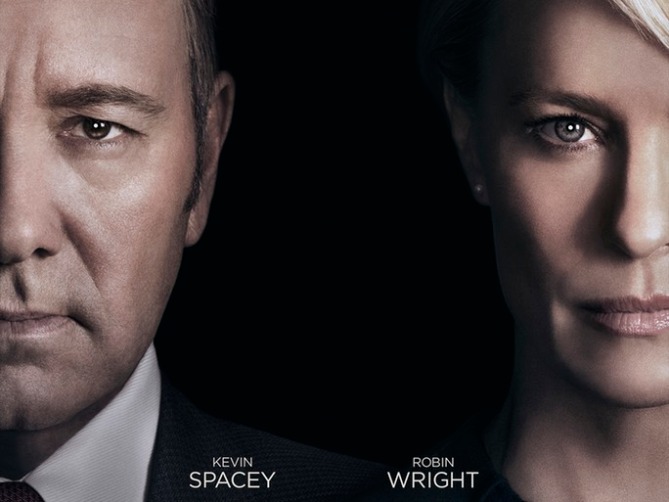 The long wait is over (nearly a year for me). House of Cards returned to Netflix today to open its 4th season. Though all the episodes are available, I will only discuss the past season and the opener in this post. This is not a full recap, but there are some spoilers – so you’ve been alerted.

When I had finished last season, I was sure (looking ahead) that Kevin Spacey‘s President Frank Underwood would be facing a difficult year. There was the Presidential election to deal with and Underwood’s rival, Heather Dunbar, played by Elizabeth Marvel, was a way tougher opponent than the usual straw men that Underwood pushed around, stepped on, or sent packing as if they mattered not. Of course they mattered, otherwise why would Underwood have bothered.

Doug Stamper (Michael Kelly) returned from the presumed dead and eventually, he not only resumed his role as Underwood’s chief-of-staff, fixer, bagman, and aide-de-camp; that is, after Remy Danton stepped aside and moved to a less stressful (and better paying) job in the private sector, a position made available by the maneuverings of Underwood’s Press Secretary Seth Grayson, but Stamper also joined his boss the President in that not so exclusive club known as I Am a Murderer, after he disposed of the bothersome (in Stamper’s mind) Rachel Posner.

Now Rachel had gone off the grid, like Jason Bourne did in India, only in her case it was somewhere in the Southwest and would have remained so, but Stamper put the screws on Gavin Orsay to bend the FBI rules and discover her whereabouts via facial recognition software, so he could thereby remove the last possible impediment to making sure Congressman Peter Russo’s demise remained as reported – a suicide.

On top of everything else, as season three ended, 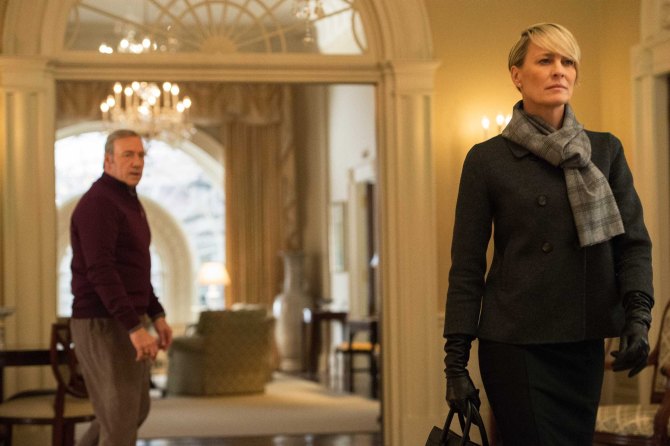 The First Lady, Claire Underwood announced to her husband Frank, I am leaving you.

So of course, I was taken completely by surprise when this, the fourth season, opened in a prison cell – 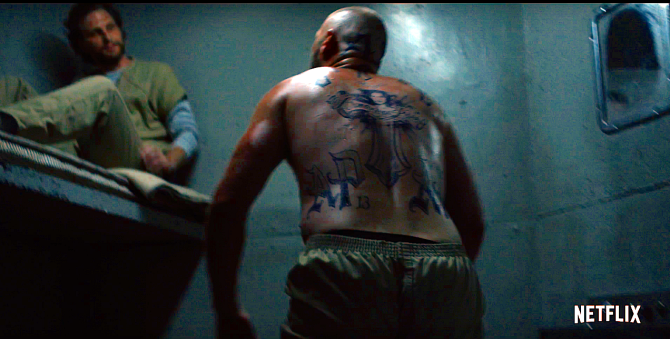 the one where Lucas Goodwin was incarcerated. Goodwin, as you may recall, worked with Zoe Barnes until she had an unfortunate collision with a fast-moving Washington Metro train at the hands of Francis Underwood to open Season Two. Goodwin did not witness Zoe’s murder, but he knew enough about Zoe and Underwood to raise many questions. Goodwin got sent to prison after he was duped into committing a cyber-crime, a crime that was arranged by the big-nosed guy from the FBI, and his operative, Gavin Orsay.

More than a few folks said at the time, that this Lucas Goodwin would be a key person down the road, and be at least an involved player in bringing down Frank Underwood. Which is all fine and good, but in this the opening stanza of the 4th season – Goodwin appeared in 4 separate scenes – 2 in his cell, one with his lawyer, and then again, in a safe house that he would occupy under a new identity.

As his attorney would say – the government is not your enemy. The government is protecting you. I’m not sure why – unless, Goodwin has told them what he knows about Barnes and Underwood.

To me, this undercuts any drama that might have arisen when we learned that Goodwin was no longer in jail. I think it was a mistake to reveal this in the first episode of the season. In fact it was an even bigger mistake to open the episode with him.

Yes = it can be argued that now we have to consider three things – what will Goodwin do with his new identity and ‘freedom’, how long before Underwood finds out about it – Goodwin’s release under Rule 35 which under ‘normal’ circumstances, the White House is NOT made aware of any such releases or reductions of sentences, and 3) how long will Goodwin, now to be known as Carlisle still walk the earth before Underwood and Stamper decide other wise.

There are some new faces, and the names are impressive – a new boy wonder, Will Conway, and played by Joel Kinnaman, will emerge as a new (and possibly next) Presidential candidate. Underwood has already belittled him to Stamper by saying how young he looks. He probably just learned how to shave.

So the die is cast on Conway. Which means Underwood will be dealing with both Dunbar and Conway.

Cicely Tyson is on board as a veteran Congresswoman Doris Jones from the 3oth Congressional District in Texas, and it is her seat in Congress that the First Lady has set her sights on as a stepping stone to running for the Senate or even Texas Governor down the road.. This is going to be complicated as Jones has been grooming her own daughter Celia Jones, played by LisaGay Hamilton to run for the seat.

Claire Underwood has already brought in her own Campaign Manager/Strategist, one Leann Harvey, played by Neve Campbell to handle her Texas campaign. Harvey has already been threatened by Frank Underwood who told her, with no uncertainty, to walk away and forget all about working for Claire. Harvey did not do so. In fact, she told Underwood, to his face, that she didn’t respond to threats.

Then there’s Elizabeth Hall, played by Ellen Burstyn, who is none other than Claire Underwood’s mother. And there’s no love lost between Claire and her mother – no doubt because she didn’t think that a guy from a trailer park in South Carolina was good enough for her daughter.

Frank Underwood would correct Hall later in the episode when he said, It wasn’t a trailer park – it was a peach farm, but you’re right – I’m still white trash. But I’m white trash who happens to live in the White House.

Of course the rumor mill, now known as Twitter and social media was all in a tizzy when Claire was nowhere to be found in New Hampshire as Frank Underwood was campaigning . She of course was in Texas, at the Hall ranch in Highland Park, a Dallas enclave for the well-to-do; sort of the real life version of South Fork, the home of the Ewing mansion in the TV Series Dallas.

Now the POTUS did not want his marital difficulties to become more than a rumor, so he dispatched Stamper, who discovered that Mrs Hall has been fighting lymphoma for three years, and that would be the publicly announced reason why Claire was in Texas rather than joining Frank as he was doing his rounds on the stump for the primaries.

They have a short press conference announcing that after Claire and Frank had reached a détente. Frank would stay out of Claire’s campaign and leave Claire alone if she would stick around to be on hand for the State of the Union address.

I’m thinking that all of this can’t be good for either Doris or Celia Jones. As Stamper said – there are no other open political seats or races or offices for Claire Underwood to go after.

My thinking is that, via this opening episode, we can pretty much see where this season is heading. I never had that feeling in the three prior seasons. Yes, we could always believe that Frank and Claire had the Presidency as their ultimate goal – and they would stop at nothing to achieve that goal. One could also safely say that what goes up, must come down, so we could translate that into a simple fact – that Underwood would not go quietly into his retirement.

He was not destined to have a peaceful departure from office.

But we shall have to wait and see. On a side note, there were no Presidential asides where Frank would break the 4th wall and talk directly to us. And one thing – the Prez had a nightmare with he and Claire fighting in a ‘take no prisoners’ style hand to hand combat. The inclusion of that was no accident.

Have a look at the Season 4 trailer –