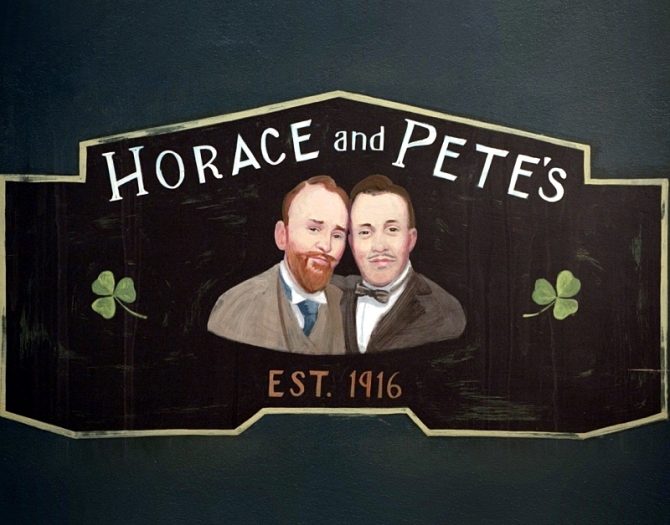 When you watch a Louis C.K. Comedy Special – you know what to expect and that’s exactly what you get. Louis C.K. loves to talk about sex in an infinite number of ways. And if I have heard him right – sex has, for the most part, driven his life both forward, backward, to highs and lows, and occasionally, into the ground.

There’s no differentiation between words that are considered bawdy or impolite by most people, and those words that you can safely say anywhere. That’s the Louis C.K. dynamic.

Louis C.K. is exceedingly funny on stage whether it is the small stage of a comedy club, or the larger stage of a concert venue.

Yeah, Louis is a funny guy.

That’s what I thought until I started watching his series which is called Louie. 61 episodes have been spread over 5 seasons, and we think there could be a 6th season although it is completely unknown as to when that might happen.

While his TV series, which airs on the FX network, has plenty of funny situations – it is a clear step away from his usual stand up comedic offerings. Louie, the series, stars Louis C.K. and is loosely based on his real life as a stand-up comedian, a father of two girls, and he’s divorced.

The take-away is that Louis C.K. can write (and perform as the lead) a TV series that has garnered plenty, and I mean that sincerely, plenty of positive and widespread critical acclaim. And to quote Louis C.K. himself, the series is both vignette-y and verite. Or said in English – a series of connected story lines that we can follow, and that approach realism. The same kind of life that many of us, in fact do, or might lead.

Or said another way – Louie the series – is a lot like a slice of life. 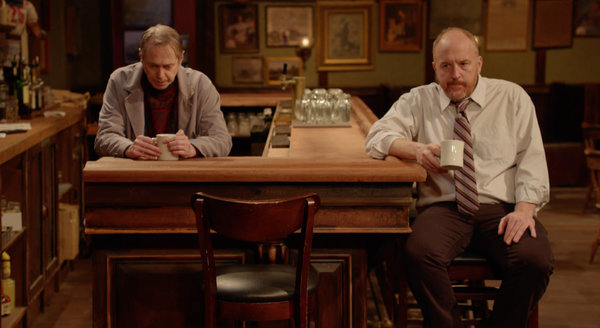 Which brings us to Horace and Pete. This show is so brand new that you can’t even find anything on it on the IMDB (yet). It dropped into reality just yesterday. It is not on TV, it is not on any premium cable channel. You have to buy the show directly from Louis C.K.’s website for $5. You can download or stream it. It comes in 1080P, or 720P.

The website says you can pay for it via Paypal or via an Amazon acct. But PayPal refused. Amazon took my money.

While we cannot say that Horace and Pete’s is anything other than a dive bar, or a neighborhood bar, or anything of a successful enterprise, we can say that it has passed through a number of generations of Horaces and Petes, and has remained opened to this very day.

The show is so new, that the upcoming (tomorrow) Iowa caucuses are mentioned. As is the Carolina Panthers quarterback Cam Newton who will appear in next Sunday’s Super Bowl. As is Donald Trump including his dropping out of the most recent debate.

Yes, this is a freshly minted TV show. Louis C.K. kept the news of this show under wraps, or concealed from the eyes and ears of any media types. In short, there was no publicity, no p.r. tours, and no appearances by Louis C.K. on any talk show to promote this venture.

While the show or the series (only one episode so far) can be described as a comedy-drama, once you have a good look, you might tend to call it a drama-comedy with the emphasis on drama with only a smattering of things that could be called comedic but that would involve a healthy amount of stretching.

Maybe the term depressing is a better fit.

While Louis C.K. is no Neil Simon, he is also not an Arthur Miller either. Death of a Salesman in a Bar doesn’t fit. Nor does Prisoner of Second Avenue.

Here, in my estimation, you have Louis C.K. attempting a lighter version of Woody Allen’s dramas rather than Woody Allen’s comedies. I think that this is what Louis C.K. is trying to establish. That he can write a drama. And simultaneously, he’s touching base with Norman Lear’s All in the Family. 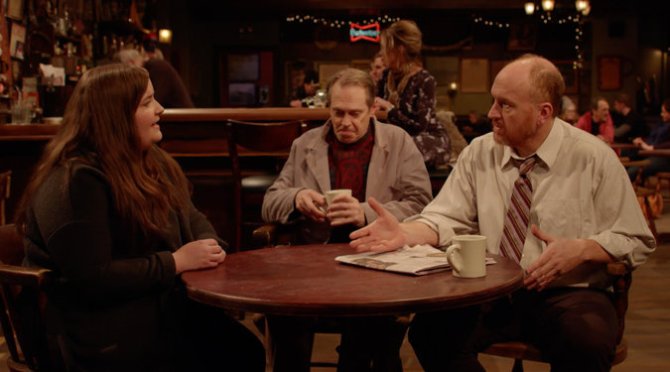 Horace and Pete are presented as brothers. Horace is trying to re-establish some positive contact with his daughter Alice played by Aidy Bryant (above). Pete is dealing with the fact that he, via the sale of his health insurance company, hasn’t received his insurance cards, so he has basically run out of his propitol (he has one pill left which he is holding on to for a dire emergency) and his overall behavior is getting increasingly erratic. 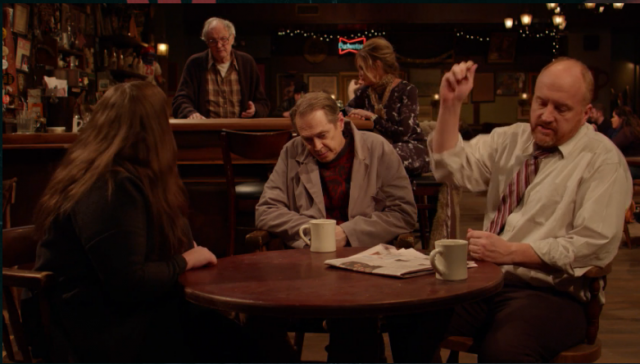 Alan Alda appears as an older Pete, also a part of the family, who pours the drinks. He’s irascible, annoying, and is a foul-mouthed misanthrope. 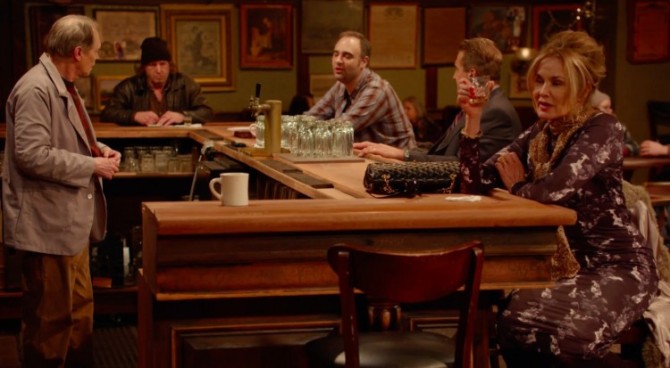 Jessica Lange plays Marsha, who was the last girl friend of Horace’s (Louis C.K.’s) father (the Horace from the previous generation. Alda’s Pete called her the last woman who the elder Horace was fucking. 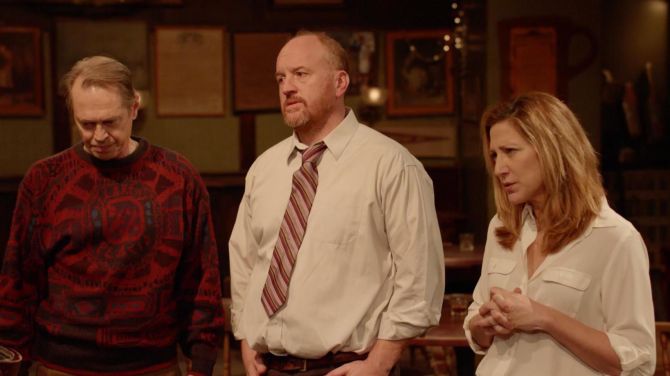 Then there’s Edie Falco as Horace and Pete’s sister Sylvia, Rebecca Hall as Horace’s g/f Rachel, plus an assortment of pub-crawlers and the bar’s regulars, most of who are the kind the begin their day with a Double Jack. 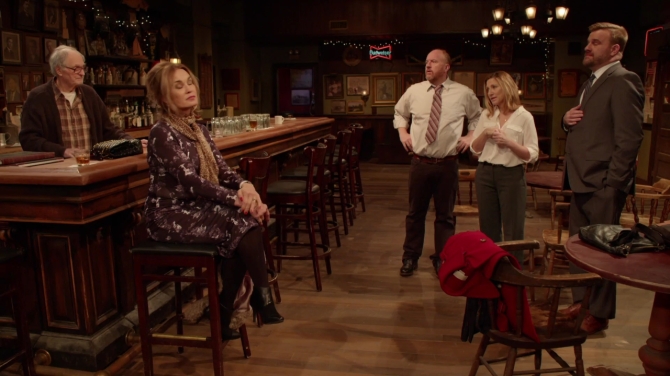 Summary: This episode has it’s moments – Alda steals the scene every time he opens his mouth. He’s a Bunker-type only with out the smirks. This Pete is deadly serious about every thing he says much of which is either crude or offensive.

The show does have some memorable lines (at least what I call memorable):

You don’t bring in a lawyer to break up your family.

Horace after Horace, and Pete after Pete; and not an asshole between [or among] them.

And one more – when Buscemi’s Pete finds out that his assumed father is not his real father he says to Louis C.K.’s Horace –

So we’re not even brothers?

We are in our fifties. What’s the difference?

This is the serious side of Louis C.K. and you can check it out for the princely sum of $5.