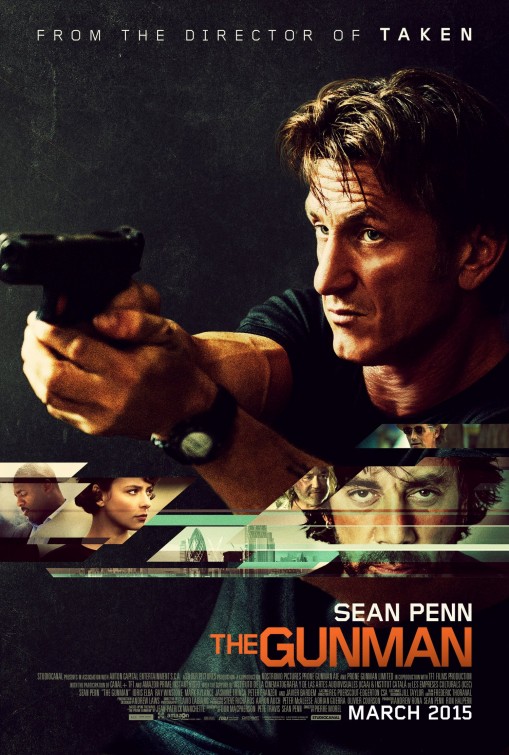 Do you like films that bring us to places we haven’t visited on our own? How about this – all in one film – the DRC aka the Democratic Republic of the Congo, London, Barcelona, and Gibraltar. With those specific locations, in a film that could be called a global conspiracy/action thriller – does that increase your desire to see the film?

When you hear of a film that has an impressive cast list – including either big and well-known names (A-Listers or award winners) in addition to desirable locations, does that get you ready to leap off your couch, grabbing your wallet and car keys, or Metro-pass, as you race out the door. In this case we can start with Sean Penn, then add in Ray Winstone, Javier Bardem, Idris Elba, and Mark Rylance. 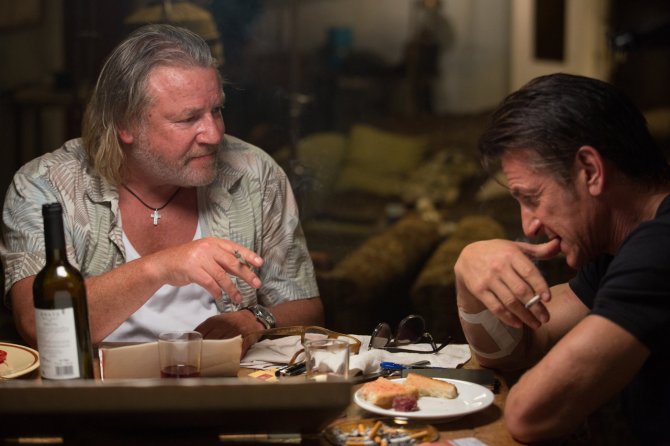 Ray Winstone as Stanley and Sean Penn as Jim Terrier

Then we can toss in some comps and equate the film in terms of: Somewhere between the Bourne films and books by Robert Ludlam and/or Tom Clancy, or, a hitman with a conscience, or even: the stuff (consequences) that they don’t tell you, and that aren’t in the job description, when you sign on to be a contract consultant working under the CIA umbrella.

Such a film is The Gunman. Which is set in the locations described above and with actors named above. The film opened on March 20, of 2015 and created only small and shallow ripples. It achieved a Metascore of 39 out of 100 based o 41 critic reviews as compiled by Metacritic.com and an aggregate of 5.8 out of 10 by nearly 23,000 IMDB users.

In short, The Gunman neither made a mark critically, nor hit its projections financially.The gross box office returns were $15.9 million which when measured against a $40 million budget can in no way be deemed anything other than a flop.

So why am publishing a review now? Well yesterday was a slow day and I found the film highlighted on Netflix, so I gave it a try.

Sean Penn is now in his mid fifties and he’s come along way since playing the stoned surfer Jeff Spicoli in Fast Times at Ridgemont High in 1982 which was followed by Bad Boys in 1983.

His film career has had plenty of highs (Colors, Deadman Walking, Mystic River, and Milk, as well as some lows, just like his personal life, and he’s no stranger to being attached to ’causes’ that are often controversial. 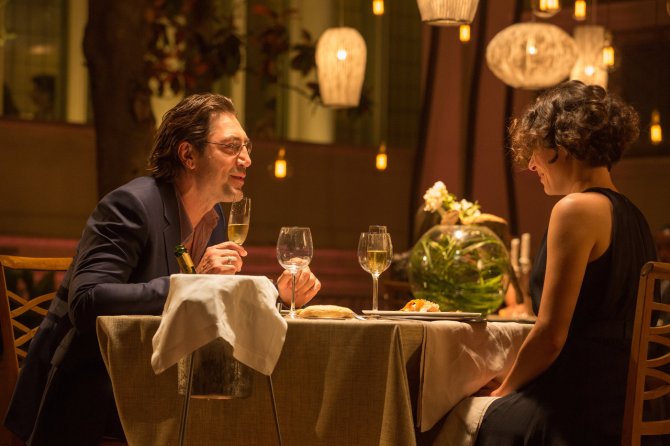 Javier Bardem as Felix and Jasmine Trinca as Annie

But with this film, Penn has attempted to transition himself into the Middle-Age Action hero; a neighborhood currently occupied by the likes of Tom Cruise and Liam Neeson.

Penn does well with the action set pieces in this film, and is often seen shirtless, intentionally and as if the intent was to show off his fitness and muscles.

He also received a screen-writing credit and a producer credit for the film. So this film The Gunman can easily be described as a vanity project.

Penn opens the film as a member of a security detail for humanitarian relief operation in the Congo. This during the long and bloody Congo Civil War in 2006. But the Minister of Mining in the Congo has decided that all the existing mining contracts are detrimental to the country, and his intention was to scrap all the deals and renegotiate new deals.

Of course this isn’t good news for the multinational mining companies. So the minister will have to be dealt with, as in taken out – just like Mr. Wombosi in the first Bourne film. Penn’s character, Jim Terrier is the designated sniper.

The deal was, if and when the mission was accomplished, Penn’s character, Jim Terrier would have to leave the country and the continent immediately, like on the first plane out of Kinshasa.

Eight years later, a remorseful Terrier is back in the Congo, this time working in a real job – supervising the construction of wells and then all that followed with the wells in use. And then, one day, he is forced to fight off an assassination team. Initially, Terrier doesn’t realize that this was not a random attack, but searching one of his assailant’s body reveals a syringe and tubular container.

For his blood. As ‘proof of death’.

And there’s your opening. Terrier immediately heads to London to ask some questions and get to the bottom of who is trying to kill him, and why? So he has to look up some old associates from his former career like Javier Bardem as Felix, the facilitator who set up the Mining Minister’s killing.

Like Ray Winstone as Stanley, like Mark Rylance as Cox. Terrier will also meet Annie (Jasmine Trinca), the love of his life in the old Congo days, who is now married to Bardem’s Felix. It is at this point you can insert the male sexual jealousy card.

Terrier is also facing the knowledge, that two other members of the original kill squad, are already dead. Add in the fact, that immediate ex-filtration was ordered and arranged only for the shooter, back then, and that Felix, as facilitator was the one who had chosen Jim Terrier as the trigger.

This comes rather early in the film and at this point, you already know what will happen over the last two-thirds of the film.

Yeah it was fun for me to revisit Barcelona, and to get my first look at Gibraltar – but the turns by the supporting actors were either wasted, or poorly scripted. Idris Elba was a nearly a bait and switch character as I’m sure he had less than 8 minutes of screen time. 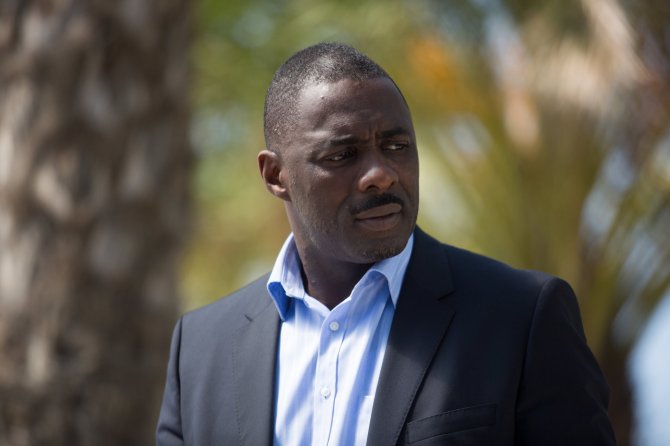 Javier Bardem had the most lines but his screen time was also limited and then fractured by the fact that he had to play a drunk.

Mark Rylance was good (wondering if Willem DaFoe turned this role down as it is the kind of role he excels in), but his main scene was at the film’s last action set piece – at the Corrida de Toros, the bullfights – only Barcelona does not allow bullfighting.

I think the film is deeply flawed. the jealousy, the unstated but obvious digs at US involvement in Africa, are two of the main themes, but are given short shrift by the screenplay, which clearly opts for physical issues rather than political or personal issues. The third theme is that of head trauma – an unavoidable result from repeated personal fighting, or warfare (being in proximity to gunfire), and that topic rears it’s head only intermittently.

Terrier’s MRI clearly shows that his brain has already been seriously impacted, and that it is going to suffer if Terrier doesn’t adopt a new and more tranquil lifestyle. Of course he doesn’t, as he must now fight for his life. 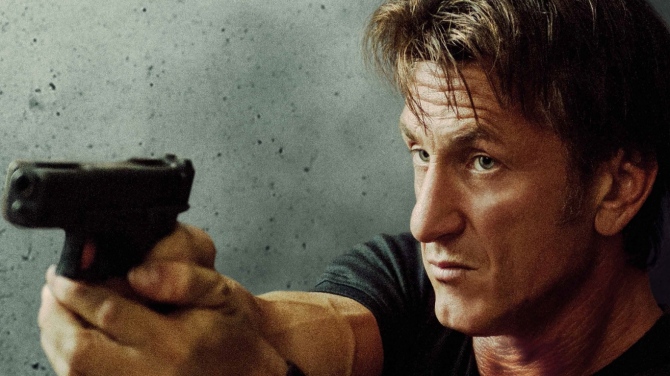 So what we get is the repeated onset of seriously debilitating headaches which are powerful enough to impact Terrier’s vision and balance at their worst, but yet, Terrier can always manage to overcome them as required in each of the action set pieces. So there was no point in having them as they were surely just a gimmick or ploy.

Summary: If you have an existing Netflix streaming account and have two hours to watch the film, and like action thrillers, then watching this film will not prove to be detrimental to your health. Then again, this film will definitely NOT improve whatever ails you spiritually.

Consider this film as a pass time and nothing more. Two point seven five out of five, and that’s being more than a tad generous with that rating.