This is the second film I saw today, my third day at the Twin Cities Film Fest. They call it a Sci-Fi Thriller/Dark Comedy and the title is Counter Clockwise.

Here is the blurb from the TCFF Film Program Guide:

Counter Clockwise is sci-fi thriller/dark comedy about a brilliant scientist named Ethan Walker on the verge of inventing teleportation. But something goes wrong and he accidentally invents time travel. Ethan is hurled 6 months into the future where he finds a sinister upside down world. People are trying to kill him, he’s entangled in corporate espionage, and, worst of all, he’s the prime suspect for the murders of his wife and sister. In an attempt to change history and save his loved ones Ethan must travel back in time to uncover the mystery surrounding their deaths.

And here is the film’s trailer –

Unfortunately, as well made as this trailer is – it actually does lead one to believe that this film could be pretty good, the film itself cannot live up to the promise offered by the trailer. That’s the good news. The bad news is that this trailer completely hides the fact that this is a dreadful film. And that’s being kind.

Let’s set the stage for you with some other stuff that you will know – I’m assuming you won’t know much about this film. Have you seen the Sprint Commercial where a guy builds a time machine so he won’t have to wait 17 months for his next I-phone 6s.

His friend comes in, and yadda-yadda, with Sprint, you’re eligible for an upgrade as soon as the phone is made available to the public. Above are  the two guys talking.

You know how this ends right: a bell goes off and the guy in the yellow jacket says, What’s that? The bearded guy in the coveralls says, Oh that’s lunch – leftovers from tomorrow night.

Now here’s the guy the movie: 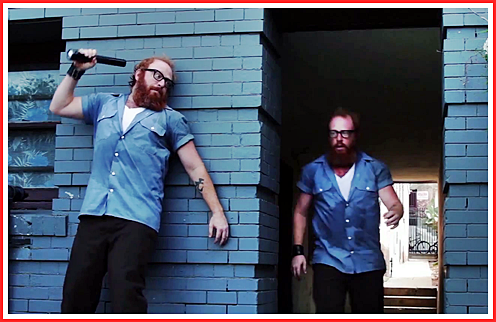 Not quite the same but definitely more alike than not. And yes that’s right readers – we have the present and the future Ethan Walker in the same time frame. Or maybe it sounds better this way – the present Ethan is about to take out the future Ethan to prevent a crime. Nary a joke in sight and they called this a dark comedy.

Here’s what else you get: 5 chases on foot in the first 50 minutes. Ethan runs and bad guys chase him. Not a wit of this makes any sense as it plays. When Ethan buys a good bottle of wine for his mother – three times the same guys, in a chase, run into him and the wine bottle breaks open on the sidewalk. Three times!

You know when Tom Cruise and Emily Blunt do that repetitive thing in Edge of Tomorrow – you know when entire scenes are replayed: Stop! Reset! it was worthwhile. Here in Counter Clockwise, it is anything but enjoyable.

I can imagine that screenwriter and lead actor Michael Kopelow, and director George Moise, they must have spent hours watching Star Trek,  because that is the kind of machine, the character of Ethan Walker is building. You know the molecules are broken down then reassembled in a specific place – as in Beam Me Up Scotty.

Ho hum. Using equipment that looked like discards from a 4th or 5th hand junk store – the film was made on the cheap. Hence all those chases on foot. Hence the recycled scenes of the wine bottle dropping. Hence the one-eyed dog Charlie who was the test dummy for Ethan’s tele-transporter device.

Charlie eventually did come back, or maybe that was in the future, I’ve no idea.

They did a cheap scene with a detective grilling Ethan. It’s in the trailer – the props were a table and a strong  lamp, a lot of cigarette smoke, and mass quantities of inexpensive darkness. No need to hire a producer to scout locations, or a set designer for this one. They produced this scene for less than $50 bucks.

Okay, excluding THEIR family and THEIR friends, most of us won’t know a single member of the cast. You can count the number of funny moments on one hand.  A guy has sex (simulated) with a dead woman. And to top it off – try these two quotes from the film –

Roman: People think you gotta wash your hands after you take a piss. As if your dick is filthy. My penis is immaculate, it’s been in my trousers all day long where it belongs. Now my hands, they’re filthy dirty. You should have to wash your hands before you to take a piss.

Hank: Can I ask you a question? Did you really love your wife? Ethan: What? Hank: I mean the fact that she’s dead, you still attracted to her?

This is the guy I just referenced who wasn’t able to restrain himself.

Had enough? Well I certainly don’t want to continue this review, or waste any more time on this movie. Just a half a point on the ratings meter.