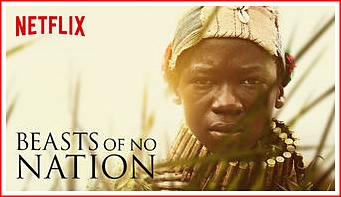 In the rainy season, the ground is washing away beneath your feet. Nothing is ever for sure, and everything is always changing.

These are the words of Agu, a 10-year-old boy in a small town in an unnamed West African country. This particular town lies in the buffer zone – an artificial zone between the government (NRC) controlled areas and the rebel controlled areas.

When word comes to this town that the rebels are advancing, a decision in the town is made by the elders. The women and children must be sent out immediately (to save them) and the men of the town, must stay to protect and defend the town which has existed for centuries. We hear, This land has been given to us by our ancestors, and we must protect it.

Agu watches as his mother and youngest sister are driven away in a packed bush taxi for exorbitant rates. We don’t even know if they will be alive once they are a few klicks down the road.

Agu is heartbroken. But not for long. Soon the government forces roll into town from the opposite direction. After a brief discussion involving a local woman known to be either crazy or a witch, Agu’s father, and the military leaders – we hear from the NRC Sgt.:

We find you all to be spies. I sentence you to immediate and summary execution.

And in a few short moments most are gunned down. Agu and his older brother try to flee, and are chased. Soon the older brother takes two rounds into his back, and he is dead before his body crumbles to the ground.

Agu pauses briefly, then races on into the bush.

So begins the new original feature film from Netflix (available by streaming and select theatrical venues), called Beasts of No Nation, which stars Idris Elba as the Commandant, and introduces Abraham Attah as Agu.

A brutal war took a boy’s family. A mercenary commander takes his youth. In this war, demons come for every one.

Directed by Cary Joji Fukunaga, who in the recent past directed the first season of True Detective, this is definitely a bleak film. First we watch as Agu appears as a happy 10-year-old boy, enjoying his life,  and then, it is suddenly changed. He has to flee into the bush and uncertainty to save his own life, but eventually he is captured, is absorbed into the rebel army, and is taken in by The Commandant.

The boy is suddenly faced with following orders and thereby achieving more than just survival. There are drugs, and there comes a time, after Agu has killed his first man – that he has become inured to death, is more than willing to steal whatever he can find or use from the dead, and he has becomes a hardened soldier, a killing machine – and he’s not even a teenager yet.

Idris Elba is masterful as the Commandant. He is wise in the way of men, and boys as well. He knows how to cajole and sweet talk his charges, and he knows how to inspire them to face death and killing and not be afraid. And he instills obedience into them.

We, the viewers are placed in a difficult position. It is as if we have been transported back in time to the encampment of Col. Kurtz in the Cambodian jungles – the heart of darkness. But this film isn’t 1979’s Apocalypse Now.

It is as if we have joined up with the boy soldiers under the influence of ganja, blood lust, and the incredible yet charismatic influence of Colonel Poison, the rebel leader from 1995’s Blood Diamond.

Rather, 2015’s Beasts of No Nation takes place in an unnamed African country, and we have no heroes. We have no one to admire. No one to care about. Going in, one might think that Agu would be a sympathetic character.He would be the one character to root for, as well as the beacon of hope.

But as Agu stated early on, nothing is for sure, and nothing remains the same.

Soldiers living on the ground need food, water, ammunition, and pay. Without sufficient quantities of those, the days run together as morale sags, and despite the bright sun, life becomes dark and dreary. Via a radio message, the Commandant and his battalion are summoned to the Supreme Commander’s HQ.

It is at this point that things began to change. But not as you might expect. And to tell you anymore would be to give away too much.

Strengths: the cinematography, location shooting in Ghana, the musical score which at times will make  you think of a place musically that you formerly associated with U2 (like the intro to Where the Streets Have No Name or the musical bridge in the middle of I Still Haven’t Found What I’m Looking For ), the incendiary charisma of Idris Elba as the Commandant which masks something even more shocking, and the steep and rapid changes that befall Agu as he changes from a happy boy to a Beast of No Nation. 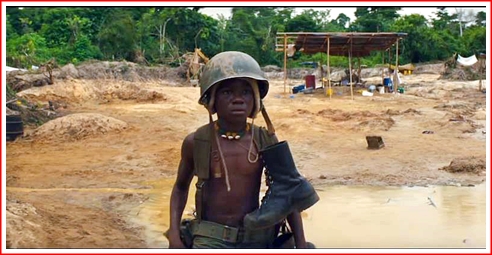 Weaknesses: There’s nearly no relief from the horrors of genocide and war. And while you will see some shocking events, other disturbing events are more implied than visually depicted, yet are no less horrific. When Agu marches through the trenches it seems like a direct lift from Paths of Glory. Note the boots he has dangling around his neck – he will use those boots when his feet grow into, if he’s alive.It is a startling image, if not original. Finally, the film begins with some English and a lot of subtitles when English is not spoken. But that changes to almost exclusively English.

Which is fine when you can understand it…

But the true key element of the film was the destruction of the soul and spirit of what was basically a good kid. 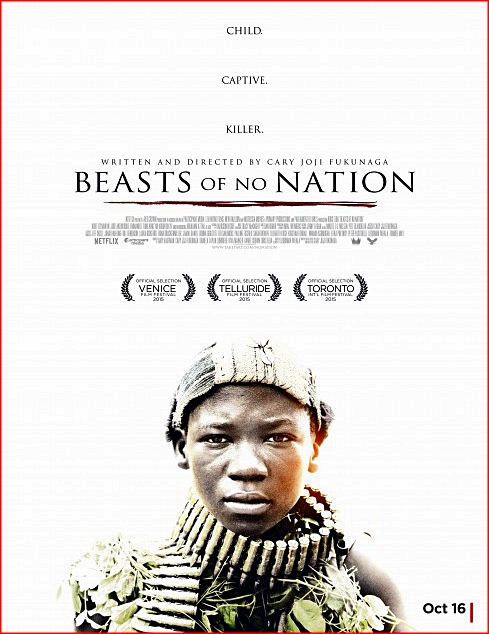 I’ll recommend the film, but I will absolutely state that this is no walk in the park, and certainly no drive in a covered Range Rover through the heart of the rain forest and its leafy glades. You will emerge shocked by the brutality, and discouraged by the fact that these things really do happen.

2 thoughts on “Beasts of No Nation”