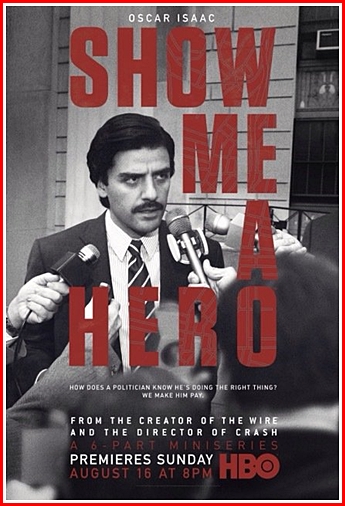 Mayor Wasicsko: When does the fun part of being Mayor begin?

Not any time soon. First you’ve got to deal with an angry but calm Judge, an even angrier constituency who might be only seconds away from a full-scale riot, and the Archdiocese of New York contributing land for a housing project that the residents don’t want. And that’s just for starters

Judge: I’ll have the plans for housing on my desk by Wednesday. If not I’ll begin fining the city of Yonkers. Starting with $100 dollars the first day, and with each day, the fine will double.

That doesn’t sound too bad. Hold on. Try doing the math. Never mind – they’ll do it for you.

No one said it would be easy. Most of the action takes place in the City Council Chambers. The public who attended, had to pass through metal detectors after the Mayor was sent a bullet in an envelope through the mail – which while not quite as direct as the Sicilian message with Luca Brasi’s vest wrapped around a fish, and both of those wrapped in a newspaper in the Godfather – was still an ominous threat. So the attendees were in no mood to sit on their hands as the City Council did what it must.

The spectators blithely ignored common courtesy and etiquette. Instead chaos reigned. To call them raucous would be both kind and an understatement of enormous proportions.

So this is where we are in Part II of Show Me a Hero, airing on HBO. Created by David Simon of The Wire fame, and co-written by William Zorzi and Simon – this is a fine drama of less than epic proportions. The citizens of Yonkers voted Wasicsko in on his platform of voting in favor of appealing the Circuit Court’s decision. The incumbent Mayor voted against the appeal. He was shown the door by the electorate.

So Wasicsko, now occupying the chair in the Mayor of Yonkers office has to make a decision. He’s got his hands full – either force a housing project on the citizens, or have the city go broke while fighting against it.

In this second of six episodes, we meet Jon Bernthal who plays the lawyer Mark Sussman. Also getting a terrific scene is Winona Ryder, who worked for the former Mayor. At a dinner with Wasicsko, she tells him how she feels – out of touch, unwanted, pushed to the periphery, and stunned that she’s now out of a job. Ryder was simply superb as she poured out her heart to Wasicsko, who basically had nothing he could say to brighten her.

Catherine Keener shows up at the City Council Chamber, and she’s one of the more vocal critics. Like her compatriots – she too has abandoned her manners. And with a pounding of his gavel, Mayor Wasicsko has her ejected from the proceedings. Keener has a tough role to play as Mary Dormer. She can cry all she wants about NOT being a racist – that it’s all about economics (property values) – but in reality, she’s simply scared. It will be an excellent opportunity to watch this veteran actress do her best in handling a role of a less than likable character.

Later, from her own home, she will call the Mayor. With everyone off somewhere he has to answer the phone himself. And that throws Mary off for a second or two.

She tells him, she’s against the housing project. The Mayor has to say, It can’t be helped – the law is the law.

Mary: You threw me out of the meeting the other day.
Wasicsko: Did I? I’m sorry…which one were you?
Mary: I’m the woman with salt and pepper gray hair and eye glasses…
Wasicsko: I remember you. I promise I won’t throw you out of the next meeting.

Wasicsko: Well, [he’s waiting for her to say something, when she doesn’t] goodbye.

Then there’s more about some of the side stories. A young Dominican mother, Carmen Febles played by Ilfenish Hadera, has left Yonkers for the DR, but she has to return as she can’t support her kids down there. A 47-year-old black care-giver Norma O’Neal played by LaTanya Richardson Jackson, is losing her eyesight. A young black couple move into an existing housing project in Yonkers. She is Doreen Henderson and she’s played by Natalie Paul. She’s very pregnant, and he’s dealing drugs. These look like prime candidates who will absolutely need the low-income housing.

These are three of the support players that I noticed and liked. But my hat still goes off to Alfred Molina, who chews a tooth pick as he chews up the scenery. His character is called Henry (Hank) Spallone.

Spillone: If that Judge wants me – he’s going to have to walk into this chamber to get me.

Spallone is always playing to the gallery – and he’s terrific at it. As bombastic as he is – his opposition is the laid back Judge Sands played by Bob Balaban, who gives a sparkling if understated performance.

Now if you are not crazy about City Council chambers meetings, court rooms, lawyers, and angry resident voicing their displeasure about low-income housing – then maybe this series is not for you.

But I’m liking what I’m seeing so far. Simon is as good as it gets as a creator and writer of marvelous television. As I just said the topic is not for everyone – but this is very worthwhile tv. I think they’ve done everything right so far.

The only thing lacking is a torch-bearing rowdy and angry mob of citizens marching on the burgermeister’s residence to protest. Oh wait – here in the USA we don’t have burgermeisters – we have Mayors. But that aside, Simon and the actors and the direction by Paul Haggis (Crash) have been spot on.

One thought on “Show Me a Hero: New HBO Drama Series by David Simon – Part II”