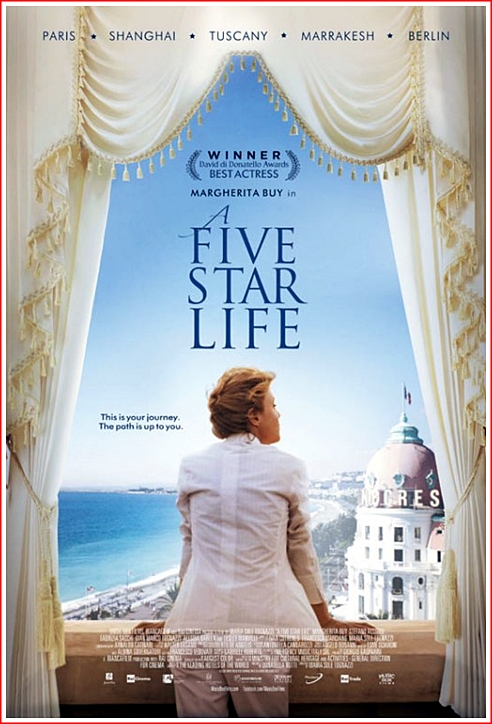 Ever stay in a five-star hotel?

What if your professional life required you to travel and stay in the leading hotels of the world on a regular basis? What if you got paid to stay in those hotels?

In the film A Five Star Life we meet such a person. Her name is Irene Lorenzi. She’s a single Italian woman in her forties and she’s portrayed by Margherita Buy. To many of us, she has a job to die for. Directed by Maria Sole Tognazzi with a screenplay by Tognazzi, Francesca Marciano, and Ivan Cotroneo – Margherita Buy walked off with the David di Donatello Award (Italy’s Oscar equivalent) as Best Actress in 2013 for her performance in this film.

It is a simple story. She goes to the best hotels with her changes of clothing and her toilet articles, a computer, something to read, and most importantly – her work kit bag. The kit bag contains white gloves to check for dust/dirt, thermometers to test the temperatures of the hot tea or coffee, stop watches to track the amount of time it takes for the room service to deliver, and so forth.

She notices if the bellman who brings the luggage to the room is well-groomed with a pressed shirt, ironed uniform, and polished shoes. She’ll take notice of the concierge’s attitude, knowledge, and even how often he smiles and if he remembers her name. She’ll notice much about the way the maintenance people, the dining room staff, and the housekeeping staff who make up the rooms each day, go about their duties.

Are the sheets crisp or scratchy, are the towels fluffy or tired, how often are the flowers are changed. How long do room service trays remain in the hallways. She even checks beneath the beds to see if the housekeeping people routinely check beneath the beds.

Then she has her computerized check-list where all the data is recorded with check marks for success, and x’s for failures, and free form text boxes for commentaries. When all is said and done – she will report her findings to the hotel manager.

What is at stake – the five stars of course.

She travels incognito. The hotels may be informed that they will be ‘inspected in the near future’ but the identity of the hotel critic/inspector is never revealed in advance. As far as the hotel knows, she is just another well-heeled, affluent, and discerning traveler who is willing to pay top dollar for the world-class service that is expected at the world’s leading hotels. 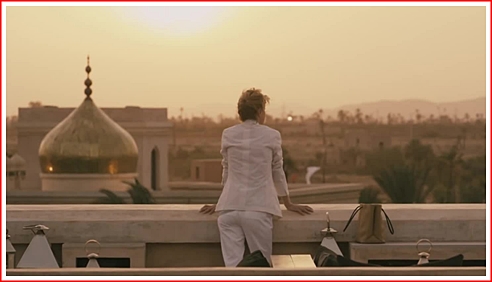 Our intrepid traveler hasn’t much time for any kind of a personal life. As she’s on the road so much. Of course, this is the downside to her job. Much like we saw in Up In the Air, the 2010 George Clooney film about a man who traveled back and forth across the USA as a guy hired by corporations to fire employees for them, we discover that the road warriors like George Clooney’s Ryan Bingham, or Margherita Buy’s Irene Lorenzi have empty personal lives, as well as empty apartments when they return home.

This film throws in an ex-lover, a female confidante, and even a successful woman author who Irene meets on the road who explains more about life than Irene had only briefly considered. Irene of course knows that the occasional meeting with her nieces and nephews is not the same as caring for children full-time. She understands that a part-time lover is not sufficient, and more importantly, that living out of suitcases in the world’s best and most luxurious hotels may be glamorous but is definitely not all that fulfilling.

That’s the film in a nutshell. As the poster tells us – This is your journey. The path is up to you. 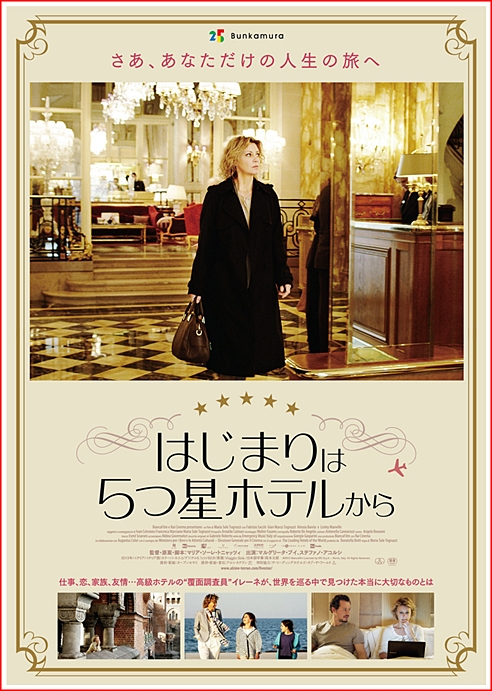 I think this Italian film has enough spoken English in it – after all, Irene travels all over the world so she must use English often – that for those of you who are adverse to subtitles, you may successfully watch this film. The hotels are luxurious indeed, and Irene is superb at her job. In effect, via Irene Lorenzi we shall experience short stays in places like Gstaad, or Shanghai, or Morocco, or Berlin, that we might otherwise never see.

Yet the film is straightforward. We discover that luxury and isolation can share the same space. We watch as Irene suffers, in a mild way, as she basks in the sunshine of this or that idyllic travel destination. Irene does reach a point of revelation but it is underwhelming rather than life-changing for her. 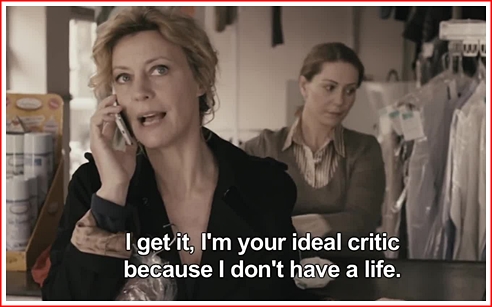 The film is enjoyable for the delights of travels to the corners of the globe, but for Irene – she hasn’t anything ahead of her except more taxis, airports, and hotel rooms. For us, the film is glorious visually, with terrific locations, crisp editing, with excellent musical scoring, but it lacks a satisfying emotional reward. Take note of the film posters – as they do tell all about the film – especially the Italian one.

By the way, the Italian title is Viaggio Sola which loosely translates to Travel Alone.

I’ll rate the film at three-point five, and I will recommend it. You can check out the trailer below –