Once there was a priest who had a pet female parrot.
The parrot hurled such vile abuses that even I would feel ashamed.
The priest shared his problem with his friend, the Judge.
The Judge asked the priest to bring the parrot to his house.
He had two male parrots who were very pious.
They sang praises of Allah all day long.
Good company would make all the difference.
[So] The priest brought the parrot to the judge’s house.
The judge put the female parrot in the cage with the other parrots.
A soon as she went in, the parrots stopped reciting the prayers.
One smiled and turned to the other…
…and whispered in his ear…
Stop chanting the Lord’s name. Our prayers have been answered.

This is neither a parable or an outright joke that I would normally hear much less pass on. How ever it does open the film Dedh Ishqiya, a sequel to the film Ishqiya which I reviewed (and loved) back in July of 2011.

In fact, on the DVD cover, the title reads: Dedh Ishqiya 1 1/2. So whether that makes it a full sequel or just a continuance, is up to you. But whatever you call it, this is a superb film. If the title doesn’t mean that much to you, think of this – the legendary Queen and story-teller (One Thousand and One Nights) called Scheherazade stayed alive by telling a king a story each night until he fell asleep. Now fuse that with the classic film, The Sting, and simmer with some spices from Thelma & Louise, and you have Dedh Ishqiya.

Having said that, I really mean to suggest that film has secrets kept from the audience, has a pair of strong female characters, as well as con men and plenty of dark humor. Our two protagonists are Khalu and Babban. They are an uncle and nephew con man team. They are also grifters, car thieves, and are not above snatch or grab, then run kind of robberies in jewelry stores. In fact, via flashback, we learn that it was just such a situation, that while they were fleeing with a stolen necklace, and the police in heavy pursuit, that they became separated.

So as this film opens, Babban is standing in a hole meant to be his grave, and he’s telling the above joke to his nemesis – the guy they stole a bag of money from in the first film, Ishqiya. The joke got a chuckle, but didn’t save his life. The Boss told his men, Bury Him!

But, like it was in the first film, Babban somehow turns the tables and is able to escape once again.

Meanwhile – in another town, the widow of the local Nawab (ruler) has offered herself as the prize (meaning bride), to the winner of a poetry contest. Of course, Khalu, who is posing as a wealthy nawab himself is in town to have a go at winning the widow, the Begum Para, as his bride.

When Babban arrives, he will take a strong interest in Begum Para’s assistant, the lovely Muniya as well as reuniting with Khalu. 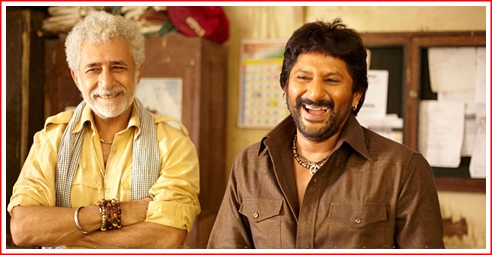 The Boys are back!

I must also state that this is a film set in the present day. Automobiles, hand guns, I-phones, a skeet-shooting competition, and railroad trains are part and parcel of the story. 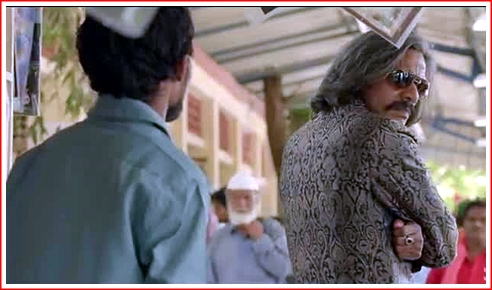 I should also mention that there is another strong villain, complete with a most impressive long mustache called Jaan. He wants Khalu out of the picture so he can marry the beautiful widow. 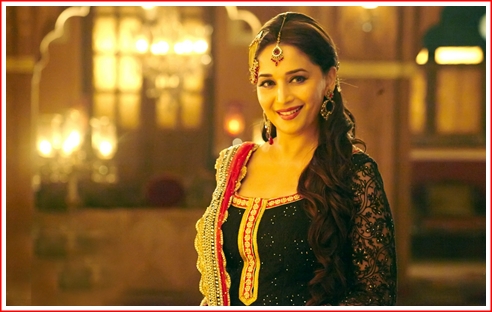 And speaking of the widow, this is not an old battle-ax of a dowager, rather, this is a beautiful woman with captivating eyes, a lush yet coy smile, and is sexy and vibrant enough to capture any man’s attention and desire, except for her now deceased husband who had two vices – gambling and young men, and apparently had no interest in women.

She, and her aide, assistant, and cohort Muniya, form the nexus around which the story revolves. In short, Begum Para represents the female parrot of the joke above, except in human form rather than feathered. 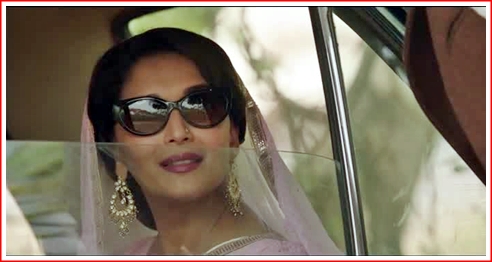 Khalu wants to marry into the old money that Begum Para represents, and Babban wants Muniya for more earthly pleasures. Jaan, a gangster as well as a MLA (Member of the Legislative Assembly) wants to marry the Begum to consolidate his own wealth and power.

The Begum Para mesmerized Khalu with her eyes and her dancing. Muniya soon has Babban where she wants him, as he’s foolish enough to confuse sex with love.

Jaan is holding yet another minor ruler, the Nawab Italwa, under lock and key, as well gunpoint, so that this guy can pen some poetry for him. Italwa is not all that thrilled about it because a) he would be plagiarized by Jaan, or even worse b) he could be misquoted.

So around and around they go. Every bit of it as charming as you’d want. Khalu, the sly charmer, is reprised by Naseeruddin Shah, and Babban again is played by Arshad Warsi. The Begum Para’s role goes to Madhuri Dixit-Nene, and Muniya is played by Huma Qureshi. Vijay Raaz has the role of Jaan.

One of the key elements in this film are the seven stages of love as described by Khalu: dilkashi (attraction), uns (attachment), mohobbat (love), akidat (trust), ibadat (worship), junoo (madness) followed by maut (death). And all of these are not only described and discussed by Khalu, but they show up in the movie. Note the Beatles tee-shirt on Khalu. But one of the main pleasures of this movie is the finely tuned nuances of the actors. A glance, a shrug, the down turn of the eyes, or mouth were just so delicious.

The film was co-written by Vishal Bhardwaj and Abhishek Chaubey, who also directed the film. Like the first film, Ishqiya, this film garnered rave reviews from film critics. And from me too.

I’m definitely on board the train of praises for this film. I’ll rate it at four-point two five. PS: the film, unlike the trailer, does have English subtitles.

The DVD is available on both Amazon.com as well as eBay.

One thought on “Dedh Ishqiya”