As you enter the shop – all the staff will announce that they are welcoming you – Iraahaimase!

You are directed to a space at the counter, or to a table for groups of three or more. In the above photo, I sat where the man (on the left side, drinking from a cup or glass is seated.

There’s a menu with pictures and text, and a notepad with check boxes for you to enter your selections. There’s also a place for you to advise how you want your ramen noodles: firm, soft, or normal.

After scanning the menu, I opted for some small pork dumplings (gyoza) and a large bowl of miso ramen. 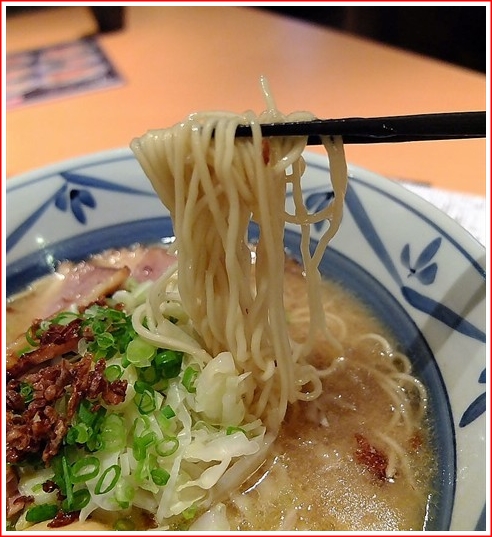 Plus a Kirin Beer.

The shumei took a while to come out. Likely because they’re made to order. Tasty, but not the best ever. Since I had failed to mark the ramen texture, they were on the firm side of normal. The pork slice was an okay size, and the chopped cabbage was a good size mound. The chopped greens and chopped scallions gave the bowl a touch of color, and a hard-boiled egg, with a reddish center rounded it out.

The soup stock was flavorful and tasty and I watched the preparation of all the orders as I was seated at the counter right in front of the open kitchen as in the above photo. It was by Hong Kong standards, a relatively inexpensive meal HK$ 96 including the service charge. That’s a bit more than $12 US.

Since it was evening I was able to take the escalator back up the hill to have a look at night life in Lan Kwai Fong,

as well as Elgin Street. Whether it was Elgin Street, Shelley Street. Hollywood Road, or even my own ‘nabe’ – Staunton Street, it was hopping where ever you went.

People out for the evening – to drink, to eat, to watch English Rugby, Italian soccer, German football, or Spanish basketball. And of course to look to hook up. Hong Kong, at night, and at least in these precincts, was a mass of people talking in a multiplicity of languages, within a neon jungle. 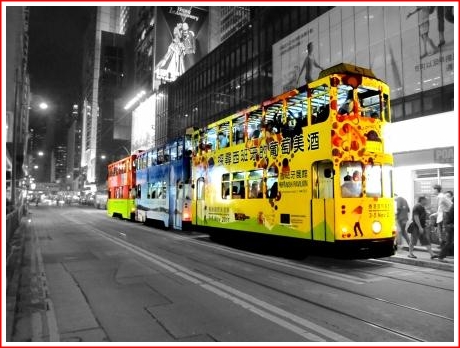 Way further down (just above sea-level) on Des Voex Road, the trams and buses, in all their multi-hued glory, carried people along their appointed routes. While the taxis,unlike the trams and buses, were available above in the Mid-levels  (sorry, the 26 Bus ran on Hollywood), in red and white took people where ever they desired and especially without a set route.

But no where was it more manic than in Lan Kwai Fong. It is not all that big of an area – basically it is just a couple of L-Shaped streets that meet to form a rectangle. But it is known as the hangout for expats. And a must see for tourists. 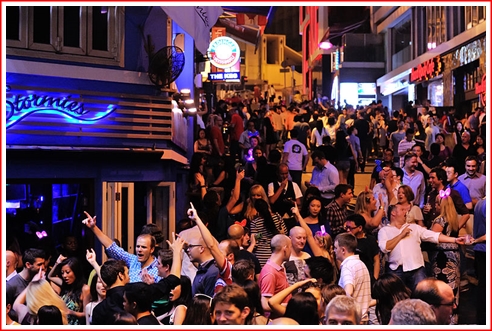 A bit too busy for me, but definitely a memorable place. I think I preferred ‘my own turf’ which was the Escalator at Staunton street. There, people overflowed the bars and stood in the street by the dozens. In Lan Kwai Fong – it was by the hundreds. Yes, Hong Kong can be a party town – and yet some how, all the expats end up in one place. 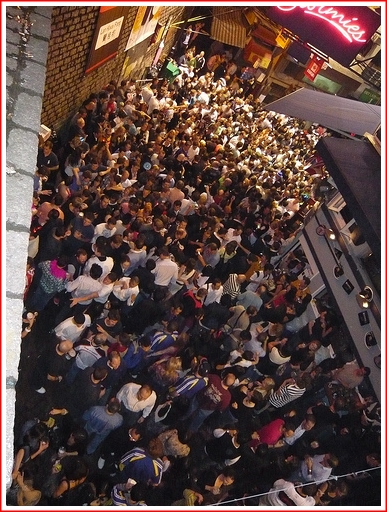 Me? I like space. So I said good night to Lan Kwai Fong rather quickly and soon was home. With a task in mind. I was going to pack up my suitcase, for delivery to the In-Town Check-In on Tuesday for my Wednesday morning flight.