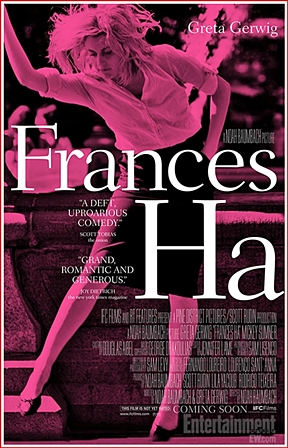 And that my friends, is the essence of Frances Ha. As IFC Films tells us:

Frances lives in New York, but she doesn’t really have an apartment. Frances is an apprentice for a dance company, but she’s not really a dancer. Frances has a best friend named Sophie, but they aren’t really speaking anymore. Frances throws herself headlong into her dreams, even as their possible reality dwindles. Frances wants so much more than she has but lives her life with unaccountable joy and lightness.

That’s our girl, Frances Ha. She’s wonderfully portrayed by Greta Gerwig, who also co-wrote the screenplay with Noah Baumbach who also produced and directed this gem of a film in pure black and white. With Frances – awkward is the new beautiful. Putting her foot in her mouth is an every day event with her, and guess what – from the beginning of the film to the end – and even when you go WTF – it’s still endearing.

Remember when you were a kid, and your aunt or your uncle asked you, What do you want to be when you grow up? Well Frances is 27 and even now, she has no more idea about what the answer to that question might be than she did when she was 7.

The hits, or should I say the laughs just keep on coming at you. Frances and her best friend Sophie have shared an apartment since their college days. They describe themselves as “an old lesbian couple that doesn’t have sex any more,” and they’re straight not gay. Or “the two of us are like one person only with different hair.” Or the best one – Frances describes herself as being “almost a real person.”

I thoroughly enjoyed the premise. While her friends make plans, make decisions, struggle and ultimately find their way, Frances isn’t even able to hold her present position. While others succeed and move forward, she’s slowly and surely slipping backward. 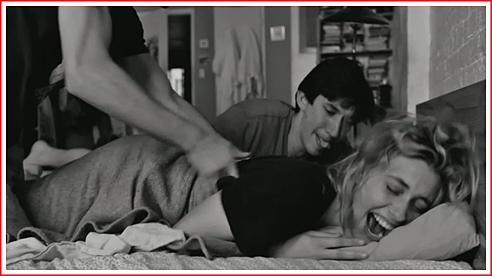 But despite all of her all too obvious shortcomings, her awkwardness, (she even says that she’s too tall to get married) the fact she’s frustrating and embarrassing, Frances, as well as the film, keep their heads up. Gerwig’s smiles are infectious. Frances has this zest and the positive outlook that keeps her going. No apartment – no problem. No money? She’ll still pick up the check at dinner. No job, no worries – she’s working on it.

Back home again… in Sacramento…

Baumbach does his part too. He shot the film in New York, and Paris, as well as suburban Sacramento. Then there’s a setting on a college campus near Poughkeepsie, NY. You won’t be distracted by the either the glitter of the cities, and or the actual or metaphoric neon. This allows you to concentrate on the characters and the story. Admittedly the story is a little thin, but honestly you won’t care.

I could nitpick and tell you that I wasn’t enthralled with much of the music, and if any thing else need be mentioned it was the fact that Gerwig was in every scene. Which is fine as Gerwig is a very watchable – but it did seem to lengthen the film.

Watch for Mickey Sumner (Sting’s daughter) as the Best Girl Friend Sophie. Sumner was on hand to introduce the film and she was blonde. She was also blonde in Missed Connections which screened at the festival last year. But in this film, she wore glasses and was definitely not blonde. Now when Mickey introduced the film – we could definitely hear a British accent – but there wasn’t a hint of it in the movie.

Also on hand, rather, appearing in the film was Grace Gummer who is Meryl Streep’s daughter. Adam Driver (seen on the HBO series Girls) is on hand as well.

This film was shown at The Sarasota Film Festival Closing Night following the Awards Ceremonies. Though Frances Ha didn’t win any awards at this festival, there’s a reason why Festival Director Tom Hall chose this film for closing night. It was very, very good. As my friend said about Frances as we were leaving the theater, ‘She doesn’t do much of anything, but she does it well.‘

Four point two five out of five. Recommended. And the trailer is below: