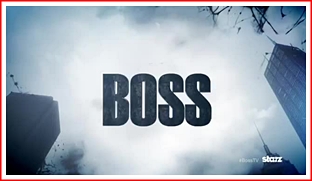 It’s not so much that this episode was confusing because it really wasn’t. But the overriding sense was that it was difficult to watch because so much of it was a display of Mayor Tom Kane’s thoughts and/or hallucinations – both auditory and visual. While difficult to watch – these were very informative.

We received information about a younger Kane paying off a woman with a child, and about Kane feuding with Mayor Rutledge who is Kane’s wife Meredith’s father. Read on.

Long ago while Rome burned, according to popular legend, Emperor Nero fiddled. In the following days, other reports hinted that Nero may have set the fires himself – to clear our a dreary part of the city and then reuse the land for a new imperial palace. Was this the first case of urban renewal without compensation? The evidence is inconclusive. Plausible of course, but unproven unless you consider that Nero took his own life rather than face an assassin’s sword.

In the present, in the starz Original Series – Boss – Chicago burned, and the Mayor of Chicago, Tom Kane, well, he sizzled. In the dark of the night, Kane, accompanied only by the hallucination of Ezra Stone, made for Toronto, and the experimental treatment for his disease. 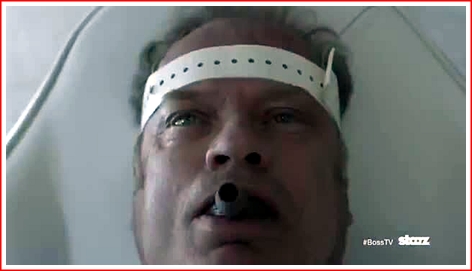 I used the term sizzled, maybe I should have said fried, because part of the treatment involved electro shock so maybe the word sizzle was mainly rhetorical. 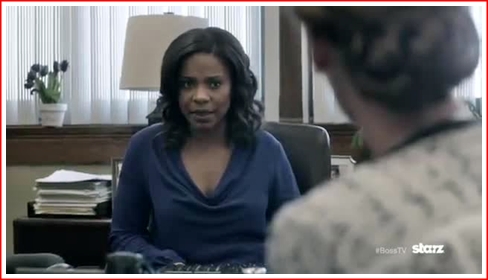 Where is the Mayor?

In other events – while the Mayor was missing, his wife Meredith Kane managed to put the assassination behind her, and she climbed right out of her recovery bed in the Kane home. She made straight for City Hall, where she stepped in and picked up the Mayoral reigns. Something had to be done. The fiasco of the Lennox Gardens had sent the city over the edge and straight into chaos. You will tend to have an unhappy citizenry on your hands when forced evictions occur. 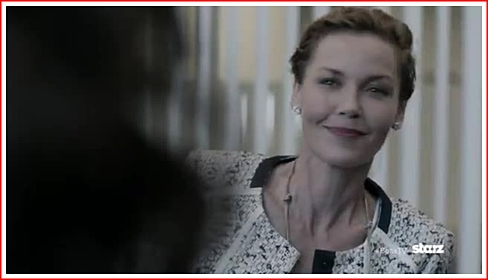 The Mayor is safe in an undisclosed location … 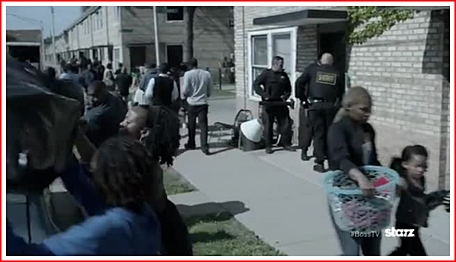 While there were the ugly confrontations between police and angry citizens in Lennox Gardens and environs, Alderman Ross turned loose Trey Rogers and his goons who did all they could to fan the flames if not start some fires themselves. Storefronts had their windows shattered, which led to looting. In short, the city had exploded, and Mayor Kane was not anywhere in sight. 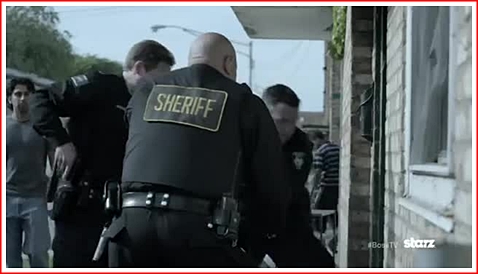 Either you come out or we’re going in …

Quick thinking Meredith Kane invented a plausible lie that Kane was at a secret (and safe) location under the care and protection of the FBI because new facts had been uncovered about the assassination attempt. And everyone knew that the FBI did not share information with other agencies. So Meredith had bought some time. When the Chief of Police attempted to demur about spreading information that he knew was false, Meredith Kane, suggested that if he didn’t go along with what she requested, he might have to start to be concerned about keeping his job.

In Toronto, Tom Kane handed himself over to the medics, and was not particularly pleasant about how he handled himself. No doubt this was because he was having trouble dealing with the now almost constant barrage of hallucinations, and flashbacks.

These were particularly informative. We saw (in the flashbacks) Kane paying a woman cash while a small boy watched (is this the young Ian Todd – we aren’t given solid evidence – but you can make your own conclusions). Kane fighting with old man Rutledge and threatening to take the old man down with him if necessary. A tearful and younger Meredith Kane telling Kane that her father has suffered a severe stroke. And the incessant cacophony of Ezra Stone’s voice echoed, and repeated, and reverberated endlessly. This was very difficult to watch and hear – and we were only watching Kane in his hallucination – just imagine this happening to you!

Ben Zajac would find himself totally alone. His last staffer first announced he was going to lunch, then changed his mind and said he was going home. This left Zajac’s campaign headquarters barren of any human life except Zajac himself.

Kane, at the Toronto facility, was subjected to Q&A’s, psychological tests like describe the picture before you, MRI’s, and other scans, and was asked various questions all for the purpose of getting a better handle on the necessary treatments. Leaving the verbal parts aside – Kane was given meds, underwent a spinal injection, and ultimately received electric shock.

Back in Chicago – Senator Walsh announced that she was moving her campaign headquarters from Springfield to Chicago, and that Kitty O’Neill would be in charge. But Kitty had more on her plate than just Walsh. She and Sam Miller reached unspoken agreements – both professionally, physically, and philosophically. Miller was still pursuing the idea of bringing Kane down, Kitty might be helpful in that – especially. 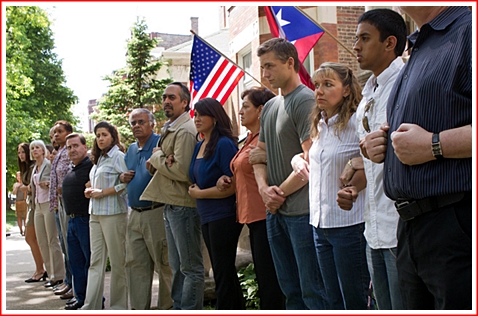 Zajac showed up in the midst of some ugly confrontation between neighborhood residents, the Lennox Gardens people attempting to move in, and the police. Zajac was not dressed as a politician – he wore just a tee-shirt and jeans. The stand-off got ugly and physical. Zajac got in the middle of some rough stuff and just about that time – a TV news camera truck arrived. 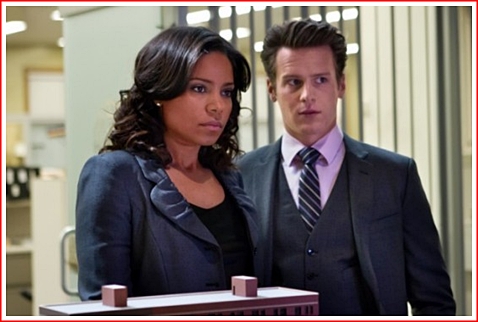 Mona Fredericks and Ian Todd were unsettled by the fact that Meredith Kane had swooped in with the regal bearing of a mayor. In fact she acted as if she was the mayor. She had the skill sets necessary but her name had never been on the ballot – so you understand the dilemma that Mona and Ian felt. 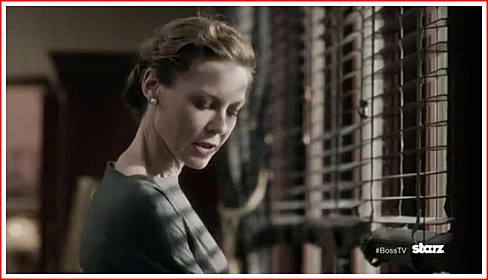 Get me Governor Cullen …

But there was more maneuvering and shocks to come. A phone call from Meredith Kane to Governor Cullen resulted in the National Guard being called in. Meredith didn’t want to make the call herself, so she got Cullen to do it. He figured that it could only help.

The biggest shock came regarding Emma Kane. She, being under house arrest, required drug testing. You will recall that in the previous episode. Emma had visited her grandfather, the former Mayor – old man Rutledge, the stroke victim. While there, she had volunteered to change the Old man’s waste collection bag. We didn’t think anything of it last week, but Emma had a plan. She would steal some of the old man’s urine, and use that in her drug testing. She expected Darius to bring her drugs. Only he had refused to go along with Trey Rogers who wanted him to join the goons and bust up the neighborhoods. Darius was now homeless, without any income, or means to acquire drugs for Emma. 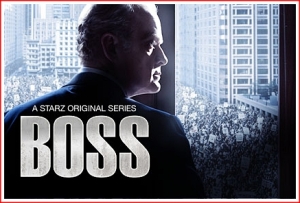 But Emma’s plan blew up in her face. The drug tester had the shocking news for Emma. The urine sample contain a startling amount of a certain drug – one that guaranteed that the individual who had ingested it would remain in a stupor. So the tester knew that this was NOT Emma’s urine. The thought that now surged to the forefront was this. Did old man Rutledge ever recover from his stroke, and who is responsible for keeping the old man in a stupor and why.

At the end of the episode we see that Tom Kane has come out of the experimental treatment. He isn’t having the hallucinations, he seems lucid, and the questions are what will happen when he returns to Chicago? Will the treatment hold, and what will he do when he regains his office. As the episode closed, the city was still a powder keg, and Babe McGantry was going to have an impact in the next episode.