With a trip to Amsterdam and Paris coming up next month, I thought I’d take a look at Paris cinematically before I step off the train in Gare du Nord next month. Yesterday, I started a film called 2 Days in Paris (2007) which was written and directed by French actress Julie Delpy. She also co-starred in the film along with Adam Goldberg. Unfortunately, I couldn’t get past the first 20 minutes of the film. Goldberg played the same kind of obnoxious character as he did in his stint on Entourage when he played film producer Nick Rubinstein in 2007. 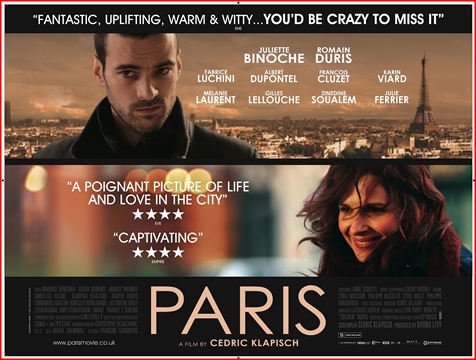 So today, I was back at it. This time I watched a winning film set in The City of Lights. The film was written and directed by Cedric Klapisch and was entitled Paris. 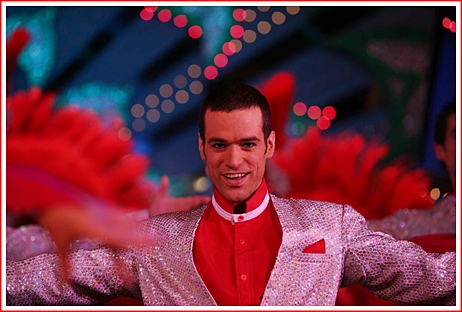 ‘Paris’ is a both a comedy, a romance and a drama. The central character is Pierre (Romain Duris) pictured at work above. He’s a dancer working in a big time Parisian night club. He gets some tough news from his doctor. His heart isn’t working all that well. Pierre awaits a heart transplant which at best has about a 40% chance of success. So while he waits, he must avoid all strenuous activity. For a professional dancer this is like a death sentence.

He has a nice apartment with a balcony, and from this balcony, he spends a lot of time watching life in all its infinite variations go by him. Pierre has an older sister Elise (Juliette Binoche), a divorcee with three children who decides to move into Pierre’s apartment to care for him. She is a social worker and dealing with people with problems is what she does.

From this two person thumbnail of the film we can see how the film is set up. While Pierre frets about his health and possible impending death, and Elise deals with the loneliness of being a 40 something without a significant other – life goes on.

The issues that these two have are significant to them, but the ripples that their lives make, are just a small tiny part of life in Paris. The whole point of the film is that whatever your circumstance are, Paris will not take time to care about you. Each of the people in Paris have their own lives to be concerned about.

We’ll meet a snobbish boulangerie owner who is forever complaining about the help. Specifically the girls who work the counter. The Bretons are lazy, the girls from Normandy are this, the ones from Alsace are that, and the North Africans…on and on – whether you want to hear it not. 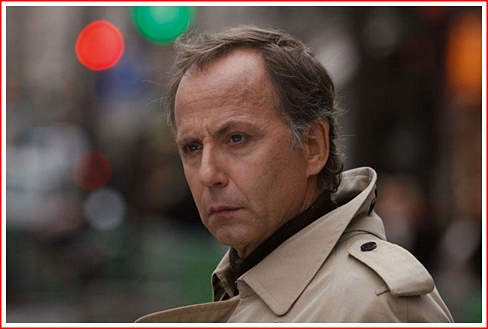 We’ll meet Roland Verneuil played by Fabrice Luchini (above). He’s well dressed in his cashmere turtlenecks, and his Burberry trench coat. He’s stylish, he’s erudite. His job – he is a host for a TV travel series about Paris. What else about him? He’s neurotic, he’s jealous, and he sends text messages to Melanie Laurent (below) who plays a college girl, Laetitia, half his age. His highlight is to mimic Mick Jagger performing.

Then there’s the fish monger, the flower stall owner, the fruit peddler – all of them working in the Paris street markets. We will follow, at least briefly a man who makes his way from Cameroun in West Africa to Paris via Morocco to take up the life of an illegal immigrant.

There are night club musicians, taxi drivers, girls and guys on the make for a night of sex – all with a story, all with a problem or three, and all interesting even in passing.

The context of the film is not when or if Pierre will die, or when or if he will have to go in for a heart transplant. But his life, which is basically on hold, now consists of watching his neighbors. This is not Hitchcock’s Rear Window but it could be considered a distant cousin.

I think the film slowly pulls you in and intrigues you because these are not folks that sit opposite you on the RER B train to Charles DeGaulle Airport. Nor are they just folks you pass on the sidewalks. They may not have true connectivity but they are linked.

The college girl, Laetitia, makes the acquaintance of the TV travel host, but she’s also a girl that Pierre watches from his balcony. His sister Elise manages to go over and do a recon about Laetita’s status – to determine if she is single, married, or involved etcetera. The fruit peddler and fish monger are where Elise shops.

Pierre buys his baguettes at the boulangerie described earlier. There he meets the new sales girl, the beautiful Algerian Khadija (Sabrina Ouazani , on the left).

The film loves its elevated locations. Pierre’s balcony is six floors up. Ronald hangs out on the Eiffel Tower.The fish seller, Jean, (Albert Dupontel) tosses his wife’s ashes from atop the Montparnasse Tower. Others check out the view from Sacre Couer, the church at the top of the hill in Montmartre.

In reality, the film is a love song to the splendors of Paris. We ride the Metro, walk in the Tuilleries, we see Notre Dame, the Place d Concorde and many other places that I can’t identify for you. Paris becomes the backdrop as life proceeds at its own pace.

While others’ lives, whether they be similar to our own, or completely different, are all mundane, yet all are unique. Early on, in a few senteces we get the heart of the film divulged for us.

Elise: You’re all alone here? What do you do all day?
Pierre: Watch other people live.Wonder who they are, and where do they go. They become heroes in my little stories.

Yes, we join Pierre, as we join the other characters. Unlike Jimmy Stewart who watched his neighbors through binoculars from his rear window – that was Hitchcock’s way of making all of us into voyeurs; we get involved with the neighbors, so we can say that this film has some voyeuristic touches, it is not really like that. While Pierre may watch from his his corner balcony, we join all of the people he sees, and voila – we sample their lives.

Consider this the cinematic version of watching life pass by as you sit in a sidewalk cafe in Paris with one difference. We learn about these people. There’s so much more to them than how Hemingway described Paris as a  movable feast that stays with you where ever you go. Bon Appetit! Speaking of which, in this film, we even find ourselves in the Rungis Market which is the world’s largest wholesale food operation.  In the article about the market (click the link that I gave you)  – there’s a picture of the restaurant called la Mer. This place is also in the film. Four point two five is the rating.

Check out the trailer: