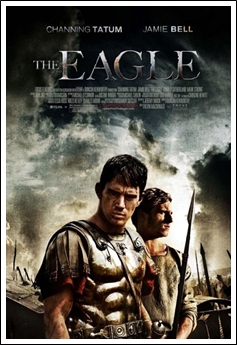 In 120 A.D., Flavius Aquila led 5,000 elite Roman soldiers on a mission beyond the edge of the known world. They and their treasured Eagle standard were never seen again … 20 years later, the commander’s son set out to solve the mystery of their disappearance.

Like Star Wars, The Eagle begins with the word crawl (above) to set the time and place. While not quite as memorable as ‘A long time ago in a galaxy far, far away‘, it served the purpose.

For the umpteenth time we get more of the togas, and sandals, and yes, the swords too, as the always insatiable, for more conquests and more land, ancient Roman Empire is once again revisited. It is hard to like the Romans because after all, they were imperialists. Their desire to rule all the lands that they could set their feet down on ultimately led to their demise – not as a people, but as a dominating global super-power, which is a bit of an oxymoron because in those days – global wasn’t a term that was in vogue, or more likely – even in use.

This story takes place far away from the bill-board free Appian Way, from the glitter of the patricians in their embroidered togas, and the masses in their home spun tunics, who dwelled in Rome, a place to which all roads led. In fact, we are so far out in the hinterlands  that the Roman troops who occupied the fort near the border called it a shit-hole, and even questioned their new commander’s sanity and wisdom for selecting this billet. We’ll be a bit more magnanimous and call it the boondocks. On the rudimentary maps of that time, the area in question was called Caledonia. Nowadays, you may know it as Scotland.

Back then, Hadrian’s Wall, which today is still standing in parts, marked the border, or as the crawl told us – the edge of the known world. To the south was Britannia otherwise known as England. To the North was Caledonia. 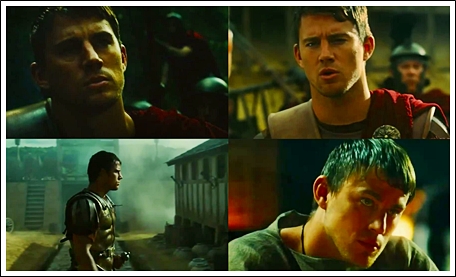 Directed by Kevin Macdonald, and starring Channing Tatum as the young general, Marcus Aquila, the film sets forth a tale of honor, courage, and loyalty, which are staples of films like this or Spartacus, or Gladiator, or even The Last Samurai. There are no real surprises in the script, in the actions, or even in the style; and more importantly – there are no wenches.

Oh, there were a few women to be seen, but ever so briefly, and ever so chastely. In this part of the world, the Romans were considered scum: they were the occupying force, had killed many families’ sons and fathers, and beyond that, the Romans had ‘defiled our daughters’;  so the angry locals said.

So Aquila, after being granted a medal of honor and a honorable discharge from the big shots back in Rome, because of his war wounds, takes it upon himself, to head north, beyond the boundaries. His purpose was to get back The Eagle,

along with his family honor, and to put his mind at rest by discovering what had actually happened to that specific Roman legion .

Accompanying him is his slave, Esca, played by Jamie Bell, whose lifetime servitude he had acquired because he had saved him from death in a gladiator match. Esca would be necessary to help lead the way – an army would be seen, but two men could hide in plain sight. Actually, they couldn’t, but that’s getting ahead of ourselves.

Off they go, into the wilds of Caledonia. And a pretty place it is, once you are up high enough to look over a commanding vista. Later, Esca would be useful to speak the local lingo, and to catch mice or rats which they had to eat raw as it was too dangerous to make a fire if you are being tracked.

The local tribe were called the Seal people but they seemed to borrow the styles of the Mohicans who would be occupants in parts of the New World, oh, about 1500 years later. Okay,the Seals dress and hair styles aren’t really that important, except that they do help you keep track in the action sequences.

Speaking of action, there are battles galore, but these days, they are not particularly viewer friendly. Closing your eyes and listening to the grunts, screams, and the clanging of steel gives you almost as much information as you might get if you had kept your eyes open.

The film does a good job of summing up or explaining the mysteries of what had happened 20 years prior. Did you expect any less? In the supporting roles, watch for Donald Sutherland who shows up as Marcus’s good old Uncle Aquila, and Mark Strong appears as Guern is also notable. As is Denis O’Hare, as Lutorius, a smart number two man at the fort. But beyond those men, the cast was pretty much unknown to me.

The Eagle wasn’t bad, it is just not particularly special. Spartacus, Gladiator, and even Dances with Wolves, and the Last Samurai were far better. If you need to kill a few hours, or get out of the rain, The Eagle will be satisfactory. Otherwise you can you can wait for the DVD.