Every so often I watch a film and it creates a series of thoughts in my head and I don’t mean thoughts on how I shall review the film. The film called 15 Park Avenue is just such a film.

First this Park Avenue is not the one that immediately comes to mind in New York. While that Park Avenue is a real address, it is also a street of dreams signifying a world of achieved success. But even that thought might be considered wishful thinking. I mean is everyone with a Park Avenue address guaranteed happiness and well being? Of course not.

The Park Avenue of this film is not even a real street. It is where an adult woman believes she lives, with her husband, and their five children. Only she has no husband, or children, and the street doesn’t even exist – except in her mind.

Aparna Sen is the director of 15 Park Avenue. She has woven an exquisite  tapestry with this film. The subjects of the film are sisterly and family relationships, schizophrenia, and the absolute hardship of living in the real world, when your own life takes place in an imagined world.

The film is set in and around Calcutta (now Kolkata) with a lengthy interval in Bhutan.

Konkona Sen Sharma is Meethi who suffers from schizophrenia and epilepsy. While she has exhibited signs of difficulties in socialization since she was a child, she was able to graduate from school, get a job, and function in the world. She worked as a journalist and she had a fiancee. That was 11 years back. But in flashbacks we learn of a traumatic event that happened back then.

Konkona Sen Sharma as herself (l) and as Meethi (r)

She is now in her late twenties or early thirties. She lives with her elderly mother, a housekeeper, and her older sister and is dependent on them for her care. The older sister is 19 years older than Meethi. In fact they are only half sisters. 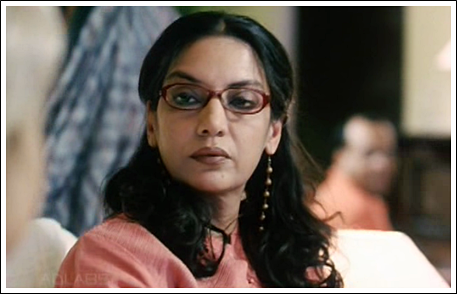 While Meethi goes in and out of her imagined world, your feelings and your heart go out to her. The older sister called Anjali, and played by Shabana Azmi, is a Professor of Nuclear Physics. She is a Type A personality, and is divorced. She has a current lover named Sanjeev, but their relationship is deteriorating.

That’s your set up. Sen has done a marvelous job. You watch as Meethi lives in two worlds – the real and the imagined. It is terrifying for we know that Meethi is not well.

Then you watch as Anjali also tries to live in two worlds – being the anchor and support system for her real family, which she works at fiercely. But at what cost? Anjali is a strong woman, independent, brilliant, and very attractive. The care she gives to her sister and her mother can only come at a high cost which is at the expense of her own personal life.

Both actresses are simply amazing. Also in play is Rahul Bose as Jojo. Eleven years ago he was engaged to marry Meethi, but he broke it off. And he’s been troubled by that fact ever since.

They will meet again, but this is only going to add to the questions for Meethi, and Anjali, and Jojo’s real wife and children.

With this film, Director Aparna Sen asks the viewers to think long and hard about who they are and what is real to them. She asks you to examine your own relationships, to consider your family, and even your own perceived reality; and then – she asks you to formulate your own ending to the film. 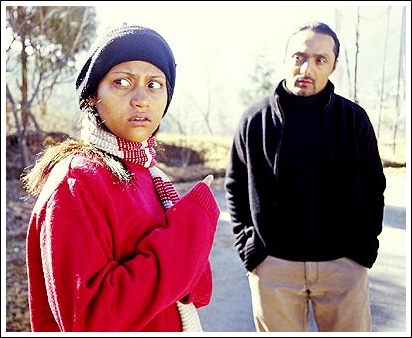 There are other questions to mull over too. What is the significance of the street dwelling beggar woman? Are today’s psychiatrists treating schizophrenia in the right way? Is it better to drag the patient Meethi out of her imagined world where she is happy and functional (implied not actual) back to our real world where she is considered a disturbed and handicapped person?

As I said at the top, there’s a lot to think about after watching this film. The film is mostly (about 90%) in English. When another language is spoken, there are subtitles. Available through Netflix and Hulu or on DVD.