Morning Glory was a hoot. It was a howl. Besides those, it was also hilarious. One of the funniest films I’ve seen in ages. Okay, maybe not that far back. Funniest film I’ve seen since … it’s Complicated which was a holiday release last December.

Morning Glory is the story of a Jersey girl who comes to the big city. Okay, it wasn’t all that far of a trip. If we were to board the ferry at the pier in North Hoboken, NJ, like Becky did, we’d land in Manhattan in about seven or eight minutes later.

Rachel McAdams stars as Becky Fuller. She’s just been laid off from her job as a TV producer on a New Jersey local morning show. Prospects are slim. Her mother (played by Patti D’Arbanville) talks to Becky about her ambitions and the reality.

You see, Becky is one of those Type-A’s who have just one speed – 120%, full throttle wide open, pedal to the metal, all the time. As she later will breathlessly tell prospective employer Jeff Barnes (played with much cool by Jeff Goldblum) “I’m always the first one in and the last one out.”

Her middle name is intensity. But there’s a price to pay for investing everything you have in your job. She’s single, alone, and there’s no Mr. Right or Prince Charming waiting to sweep her off her feet. She’s a dynamo in the office, but otherwise she’s social sludge. 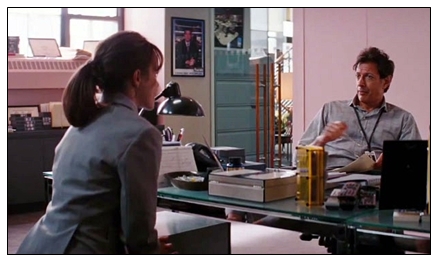 Meanwhile, the aforementioned Barnes has to hire a new Executive Producer for the IBS Network’s TV morning show called Daybreak. Of course motor-mouth Becky blows the interview. Or so she thinks. Before she’s even out of the building’s shadow – Barnes calls and offers her the job.

The show is dead last in the ratings. It has burned out countless EP’s (Executive Producers). The co-anchor, Colleen Peck (played by the marvelous Diane Keaton) boasts that she’s seen as many as 15 co-anchors come and go in the 12 years that she’s had the job. The current co-anchor’s reputation is so bad, that Becky’s Assistant Producer played by John Pankow, warns her not to even say hello to that guy, unless he’s with her.

The guy is a creep and perv. So, at her 1st staff meeting, the questions, problems, and issues are fired at her so fast, in such quantity, and with such high anxiety, that you suppose that Becky will throw up her hands and quit – 10 minutes into the job. This is how her is 1st day on the job begins. It is the beginning of the end of her career on Daybreak.. At least that it what the script leads us to believe.

But that’s not what Becky is all about. When the co-anchor doesn’t show, she sends someone down to his dressing room to get him. When he appears – she fires him on the spot, and then, surprise, surprise – she has answers to all the questions raised. In TV land, you’ve got to be running even before your feet hit the ground.

Mike, I'm offering you the position of co-anchor on Daybreak...

Becky has an idea to use the formerly great TV newsman, Mike Pomeroy (Harrison Ford) as the co-anchor. But he wants nothing to do with it. It is beneath him. He will have no part of it. He’s not called the 3rd worst person on the planet for nothing. He’s a prickly, self-absorbed, egotistical, asshole. Probably insufferable as well, but I can’t recall if they actually used that term.

There’s your set up. The ratings continued to slip. Keaton’s Peck and Ford’s Pomeroy hate each and have zero chemistry and even fight over who says “Goodbye” last. 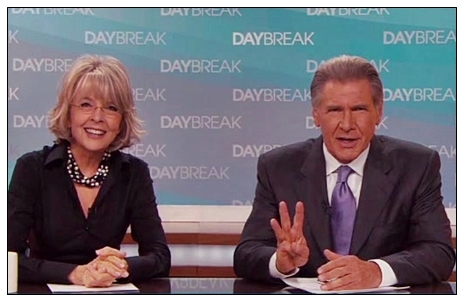 ... a pretentious, fatuous idiot who makes three times what you make

So Barnes gets an ultimatum from his network bosses. Since we don’t actually get to see them, we’ll just call them the suits upstairs. Either Becky can turn those rating around – or the entire show will go away, as in forever. Turning the show around is what she was hired to do, but she’s had no success so far. Needless to say, it won’t be easy.

You can probably guess how the film will end – but really, that’s less important than how they got to there. This film is laugh-out-loud funny. The characters are marvelously drawn in the script, and flawless performed by the great cast.

McAdams steals every scene she’s in. She absolutely nails the role of Becky. She’s spunky, determined, can’t be stopped, can’t be turned off, and won’t ever give up her enthusiasm. This was a lot to do for an actress. Doing hyper is hard enough, making her character believable is even harder, but she did and looked beautiful all at the same time.

Ford played Pomeroy with a capital P for Pompous. You feel like you want to yell at the screen, “Get stuffed you pompous old fart,” but you don’t. You can’t because his every interaction with Becky is one laugh after another.

... and welcome back to Daybreak

Keaton does Keaton with no surprises, and no missteps at all.

I’ve got to say that Director Roger Michell who was most famous for having helmed Notting Hill with Julia Roberts and Hugh Grant, has done a marvelous job with a great script from Aline Brosh McKenna who earned lots of kudos for her script for The Devil Wears Prada.  This film had a nice budget and a strong pedigree. So it was bound to be good.

Guess what. It was way better than good. It was  terrific.