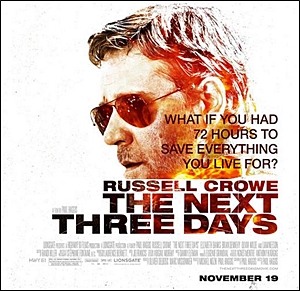 It used to be that Russell Crowe had a great marquee name. What with Gladiator, Robin Hood, State of Play, A Beautiful Mind, and American Gangster where he was second billed to Denzel Washington, when you saw ‘Crowe’ on the marquee you sort of auto-programmed yourself to put that movie on your list of must sees.

But, according to a recent Time Magazine article, Crowe’s box-office numbers haven’t met expectations lately. In fact, his The Next Three Days, which just opened three days ago on the 19th, took in only about $6.75 million over its first weekend. Granted it opened against the latest installment of Harry Potter, but that number was quite weak.

I saw the film today, on the 22nd, and while I won’t call it a dud, it did seem lacking.

The story is that Crowe’s wife in the film,  Lara, played by Elizabeth Banks, is arrested for murder, convicted and locked up. This happens so quickly, that they don’t even bother with showing any part of the trial. But Crowe’s character, John Brennan, a community college Lit professor, steadfastly believes that his wife is innocent.

Three years later, after the local and state appeals have all been denied, Brennan is out of options other than The United States Supreme Court. His lawyer tells him to look at the evidence dispassionately. He also tells him that the US Supreme Court has not heard a murder case appeal in 30 years; in short – Lara isn’t getting out. But Brennan is not going to give up until all his appeals are done. 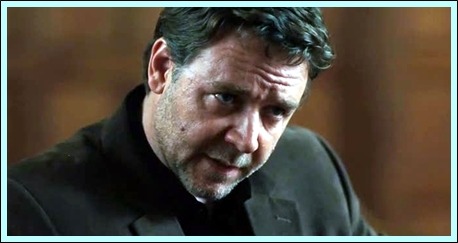 That said, he then starts researching prisons, and prison breakouts or escapes. This leads him to Liam Neeson, who plays an ex-con who had busted out of 7 prisons. Neeson’s Damon Pennington gives him some advice. Good advice, but that was it for Liam. A mere five minutes on screen. 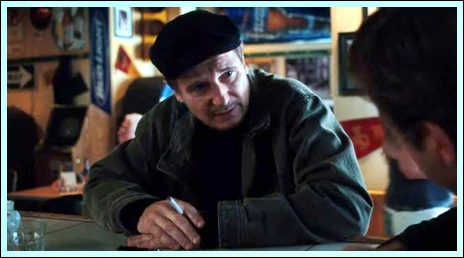 Speaking of barely five minutes on screen, the lawyer who handled Lara Brennan’s defense was played by Daniel Stern who charmed us as one of the two-bit, bumbling crooks who broke into a house and ran into Macauley Caulkin in Home Alone twenty years ago. But in this film, he’s barely recognizable behind his gray beard. All he got was a few minutes of screen time too.

And that leads us to one of our two main problems with the film. It was shot in and around Pittsburgh which didn’t hurt the film, but they really didn’t spend a lot of money to make this film. The car chases were limited in scope, as was the action. The cast aside from Crowe and Neeson was mostly imported from television. Brennan’s home, and his parent’s home were decidedly lower middle class.

Said another way, most likely, Crowe’s fee was the largest single item on the production cost ledger.

The other issue was the total implausibility of the story. When Brennan finally gets around to acquiring a gun, he has this line:

Show me where the bullets go…. 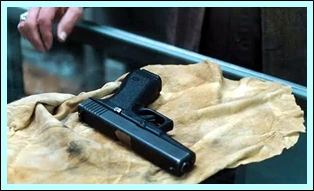 Show me where the bullets go ...

Then. moments later, he is taking down drug dealers for their bags of money. In fact, Brennan goes from being a mild-mannered guy who loves his wife and kid, to someone who is willing to kill to get his wife out of jail. We may admire his intensity, and his drive, but it certainly didn’t seem realistic or believable.

All in all, once the escape starts, it works cinermatically and is kind of exciting. But it was just so preposterous. it’s not as if the cops were incompetent, instead think of the fact that everything Crowe needed to happen, didn’t always get done the way he expected, or even in the way we expected; but it got done.It happened to work out. We as the viewers are asked to accept a lot of stuff that seemed impossible.

The Director Paul Haggis was working from his own screenplay which was an adaption of the French film, Pour Elle likely didn’t have have a big bucks production budget. His work and the story were acceptable, but no more than that, and there were even a few unexpected twists and turns, but the results were not up to the standards set in some of Crowe’s better films. 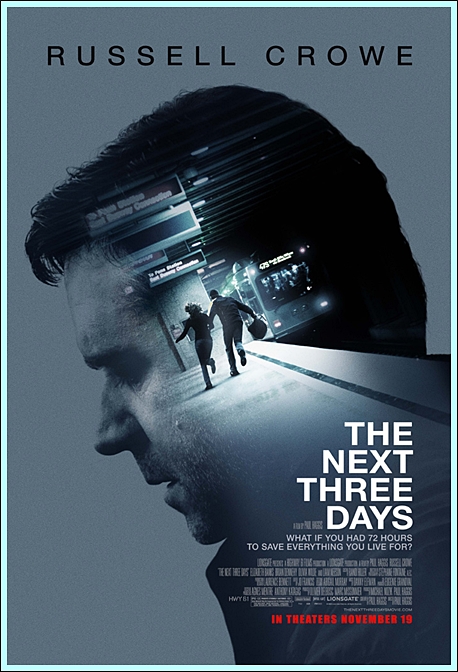 One thought on “The Next Three Days”