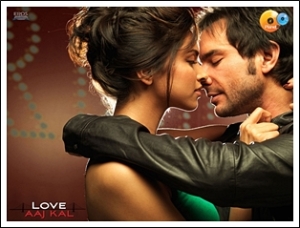 Boy meets girl. Boy woos girl. They fall in love. They have a relationship. Then they decide to break up. And all of this involves a few years in story time but only twenty minutes in screen time.

He is Jai Vardan Singh played by Saif Ali Khan. She is Meera Pandit played by Deepika Padukone. The film is called Love Aaj Kal. and was released a year ago on July 31st, 2009. Directed by Imtiaz Ali, this film is actually about two romantic couples.

The stories cut back and forth, but even though we watch one then the other and so forth, they’re not running concurrently. One tale is that of a modern (now) romance that begins in London and travels to Delhi, India as well as San Francisco.

The other begins in a Delhi suburb and then love is separated by more than the 1000 miles between Delhi and Calcutta. This is the more traditional story and is set 45 years ago in 1965. When things were different. When an unmarried girl could not even be seen talking to a man on city streets without risking a loss of respect.

While Saif plays today’s Jai and yesteryear’s Veer to two different actresses – the buffer point connecting the two stories is the role of the current, now elderly, Veer Singh played by Rishi Kapoor.

The elder Kapoor counsels Jai and helps him along as Jai and Meera must decide what is to ultimately become of their relationship. Jai, after the breakup decides to experience his ‘wild stallion days’. In London he meets a French girl called Jo and played by the decidedly British Florence Brudenall-Bruce. She becomes his girl friend.

Back in Delhi, Meera works for a temple restoration firm. Her boss, Vikram Joshi played by Rahul Khanna,  will fall in love with her. She accepts his marriage proposal.

Both Jai and Meera struggle, unable to forget each other. Jai’s dream of getting his dream job with the San Francisco based Golden Gate, Inc., comes to pass.

Now both Meera, working in the restoration field in Delhi, and Jai working in San Francisco, have achieved their life goals. They broke up to pursue these goals, both understanding that a long distance relationship could not work.

Meanwhile, back in time, Veer Singh’s dreams of Harleen Kaul are shattered when she is called back from Calcutta to Delhi  to attend a wedding. But that was only a subterfuge by her family. What actually occurs is that her family has betrothed her to another family in an arranged marriage.

While the plots contain nothing new in the way of Romance films – you won’t be surprised about the endings – the cross-cutting of stories is somewhat unusual given the time frames of each.

Saif tries to carry both stories. While he was excellent as the modern day Jai, his portrayal of the younger Veer Singh was more difficult as the part was under written, Deepika has the looks for a leading lady but not necessarily the acting chops. The young woman who played Harleen Kaul had the fewest speaking lines of any of the four leads. She wasn’t bad but she wasn’t good either. It seemed as though her role was written for her to be the proper daughter without a lot of depth to it. Rishi Kapoor was very good, but his role was small as well.

The Director did a fine job with the visuals, and I really liked the way he was able to compress time with a number of jump cuts. This film did have a few songs which were decent.

If you want to see a Romance film that won’t tax you emotionally, a film with a script with no surprises, and a film that is delightful visually, then do check out Love Aaj Kal. Yes, this is an Indian movie set in London, India, and the USA, but we really come to discover ( yes we already thought so) that a love story is truly universal.