The film opens in April, 2003 in Baghdad, Iraq. Matt Damon as U.S. Army Chief Warrant Officer Roy Miller and his men are on their second search for WMD (Weapons of Mass Destruction). The place or neighborhood is called Diwanyia. Another Army unit sustained some casualties so Miller’s unit could access the site. Their search is going to not turn up anything related to WMD, despite the fact that the ‘intel’ that Miller has been given, had come from a ‘reliable/trusted’ source, and had been vetted; so they said.  Soon, Miller will again come up without any results at a place called Al Mansour. And that’s when he begins to think about what is going on. When he questions the higher ups about the flawed intel, he’s told:  Button it up, the intel is fine – just do your job.

This is how the Paul Greengrass helmed Green Zone begins. Brian Helgeland has the screenplay credit and Rajiv Chandrasekaran is the author of the 2006 non-fiction book Imperial Life in the Emerald City which was the source or inspiration for the film.

While this film is a breathless action movie with all of Greengrass’s Bourne-esque signature style, this is not a Bourne film. The main differences are that Bourne is a fictional character created by author Robert Ludlum, and the hunt for the weapons of mass destruction and the invasion of Iraq in 2003 really happened. And there’s one more – Bourne had to deal with moral ambiguity of what he was (a trained assassin) where as Miller is driven to find the truth; but this truth is not his truth. So while you might read that some are calling this Bourne 4; the truth is that this isn’t even a light-weight Bourne.

I’ve not read the Chandrasekaran book (I am on a short waiting list at my public library for it), nor can I say with any certainty that I followed the event closely by means of the televised news coverage of the war in the comforts of my own living room. All I can remember are terms like “shock and awe, embedded reporters”, and CNN’s Wolf Blitzer’s talking head.

Basically this means I’m not going to discuss the film’s verisimilitude. I don’t think as a movie goer, I want to be concerned with how true to the Chandrasekaran book this film is, or how true the film is to the real events. This is a movie and an entertainment, not a documentary. I’ll leave that to the scholars, war historians, think tanks, and others who I am sure will produce copious quantities of words on that very subject.

Meanwhile, back in the movie theater, you’re going to get caught up in the story. Greengrass knows how to put an action film together. And he apparently can mix the action quite well with the elements of a political conspiracy thriller. You’re going to once again have to deal with the jittery hand-held camera technique employed by Greengrass, but I won’t call it a deal breaker. Instead, think of it as adding some realism to the film. However I must say, that employing the same technique while we watch two men sitting at a table is kind of unnecessary.

Matt Damon as C.W.O. Roy Miller: hero or rogue? Watch the film then decide for yourself. Damon does a great job in his portrayal of Miller who begins the film searching for the WMDs, and then finds himself searching for the truth. Damon gives the character determination, toughness, single-mindedness, and drive. But we don’t really get to know anything about him, or his family, or why he says, “…the reasons we go to war…always matter.”

Stay out of this Miller … people are watching …

Take that sonofabitch out … I want him dead! …

Greg Kinnear as Clark Poundstone: here we have the villain of the piece. You know it seems that it is always a suit placed in corridors of power that gets to wear the black hat. Think Pelican Brief, Rendition, Clear and Present Danger, and No Way Out. This time we don’t get to watch the back-room dealings. Because on screen it is all after-the-fact. Poundstone found a source, didn’t like what he was told, and tossed it all aside. Instead he served up his own recipe or version, and sold it off as the truth, by leaking it out to a reporter for a well known major newspaper. Kinnear can’t do much with this role to improve it or mess it up. But he does succeed in having us hate him.

Dayne: Does it make any sense that you keep coming up empty?

Amy Ryan as WSJ reporter Lawrie Dayne: There’s not much to see or hear about this character. Somehow Dayne has access to Poundstone.  She’s given access to some of the Poundstone’s synthetic sit-reps of “Magellan’s” debriefing. And she’s off to tell the world. In short doing Poundstone’s work for him. It’s not so much that she was suckered – she’s just a tool in this film, and as such, Ryan’s performance as Dayne is neither here nor there. And don’t expect this to be an eye-candy set up like Jennifer Connelly’s reporter Maddy Bowen in Blood Diamond. The Dayne character might just as well been a Larry Dayne – balding, be-spectacled, and portly.

Speaking of balding and portly, Yigal Naor as General Al Rawi: This is the man called Magellan. Miller wants to bring him in, Poundstone wants to make sure Miller can’t get to him. Al Rawi himself is content to bide his time, to sit out the power vacuum created by the deposing of Saddam. He counsels his fellow Iraqis that the Americans will soon bring him a deal. Naor’s performance as Al Rawi is riveting, and he conveys plenty of street smarts, backroom capabilities, and menace.

Khalid Abdalla as Freddy: Here is the Iraqi everyman who wants to help himself, his country, and his people. To do so, he passes on some important intel to Miller, and becomes his de facto translator. Abdalla’s portrayal of Freddy is searing, and indelible. In fact he has the single most important line in the whole movie:  “It is not for you to decide [the future of our country].” 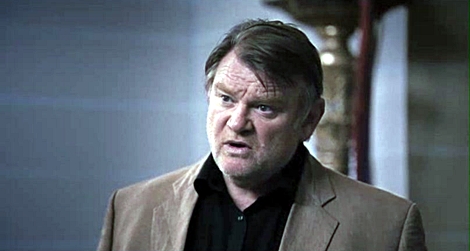 Brendan Gleeson as Martin Brown: Gleeson’s turn as the CIA Chef de Mission – Baghdad is also memorable. For once, the CIA character is a good guy. He might be playing Miller for his own ends, which are clearly to have things his way rather than Poundstone’s way, but Gleeson is very effective. And he too has a quotable line. When Miller asks Brown, “Aren’t we all on the same side,?” Brown’s response is “Don’t be naive!” 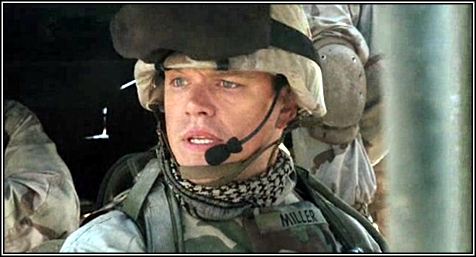 So those are the thumbnail sketches of the film’s main players. As I said above, they’re all rather sketchy and light weight. Maybe a food metaphor can best describe the movie. When Greengrass and Helgeland toss the actors and their roles into the mixing bowl, the result is a tasty croissant of a movie, you know – a delicious crusty flavor, but truly lacking in substance. Still if this is what you get, it will never be confused with an overcooked or over-stuffed turkey.