As the film opens, we are aloft over a standard mid-size American city. In fact, we will see a whole series of cities  beneath our wingtip montage style. After touchdown, a series of talking heads appear. No, these are not TV newscasters or on-the-scene reporters. These are people who have just been given the news that they have fired, let go, laid-off, sacked, or canned, due to restructuring, downsizing, or other variations of the corporate mumbo-jumbo that basically means hit the road Jack, you’re outahere.

Up In the Air is the story of Ryan Bingham, a termination professional, portrayed by George Clooney. He is a corporate sky-warrior whose profession is to fly across the nation firing people. His firm is a corporate consulting firm hired by other corporations to fly into town and give the bad news to those employees deemed no longer needed.

Bingham seems perfect for his job. He’s sincere, he not only knows what to say, but he also knows when to say it. He has heard all of it, be it anger or anguish from those who have just been given their walking papers, a kazillion times over.

We may not admire his work, but we can readily see that he is very good at it. In fact, his firm is in such high demand, that Bingham is on the road over 300 days a year.

And then there’s the Bingham the whiz of a traveler. He can pack a suitcase blindfolded as he has it down to a science. He’s got every kind of card that the airlines, car-rentals companies, and hotels offer. Frequent flyer cards don’t even go into his wallet. That’s entry level. Think bigger. Think gold, platinum, elite and higher. He even holds an American Airlines Concierge Key-card which can elicit oohs and aahs from even the most experienced of travelers. 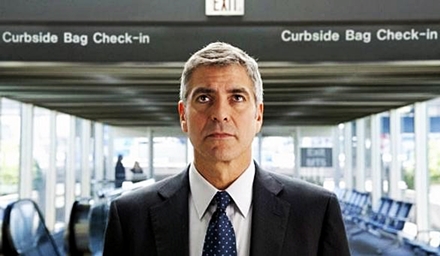 He never stands in line. He knows the ins and out of getting his boarding pass, his rented car, or his hotel room in a blink-of-an-eye, while the rest of us schlubs  move in increments of inches while standing in our lengthy lines.

He’s good-looking, he’s successful, and loves his work. He has it all. Or does he?

We eventually get to see that Bingham’s professional life is all that there is to him. His home is in Omaha, and his studio apartment has all the charm of a Motel Six room. His fridge is empty holding only some unused airline in-flight mini liquor bottles. His closet has only a few wire hangers. His shelves are bereft of anything. In short, Bingham’s personal life is as empty as his apartment.

Director Jason Reitman and his co-screenwriter Sheldon Turner, have fashioned a detailed and nuanced character in Ryan Bingham. At first we admire him, then we think he’s cool – he does a good job of charming and then bedding Vera Farmiga, who plays Alex, another peripatetic business woman. But when we finally see Bingham’s non-existent home life, we begin to feel sorry for him. 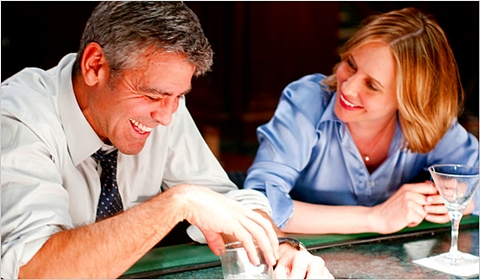 They throw us a few curve-balls along the way. His boss played by Jason Bateman, has hired a new girl, Natalie Keener, played by Anna Kendrick, who does a great job in her role, to stream-line the process and save the firm untold thousands in travel expenses. Her idea is to stop all the travel and fire people via I-chat, a video conferencing format. This would be the end of all face-to-face firing. 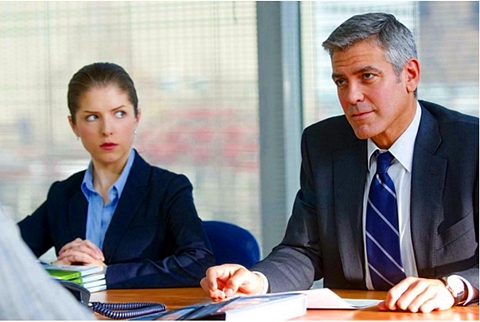 When Bingham get this news, he is  aghast. His life, as he knows it, would be over. He challenges Keener to make-believe fire him via face-to-face role-playing. His experience at this is overwhelming, so Keener fails. But Bateman as Craig Gregory, then suggests that Keener accompany Bingham on the road for a week to learn the ropes of how to fire people. 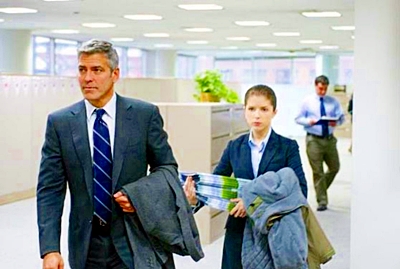 That’s the front end of the movie. Reitman will spend the second half of the movie along a more structured film format investigating the Bingham/Alex relationship, the Keener/Bingham working relationship, and he will lead us toward a resolution of whether Bingham will be able to make some real connections with other humans instead of those oh-so-brief and transitional relationships he has with those he fires.

The Director has done a very good job in the telling of the story, but I wasn’t that crazy about the story. We’re expected to believe that Bingham has achieved some personal growth but I’m not sure that he really has.

Clooney is marvelous as he shows us the  standard sophisticated, suave, and cool guy, that we all admire. He then reveals some weaknesses in Bingham like fear and loneliness, and this only accentuates why he is one of the highest paid actors. Clooney, just like Bingham is very good at what he does.

Farmiga, as Alex Goran, the sexy female road-warrior is also superb, but her character is all surface. We never do find out much about why she does what she does.

Kendrick does perky and professional so very well. But her role has much more depth than does that of Alex Goran. We do see her vulnerabilities, her uncertainties, and her anger. We mentally applaud her when she calls Bingham an asshole.

The film is slick, and entertaining, and is generally receiving favorable reviews. There have been some Golden Globe nominations for the film as well. But my view is that while I can envision an award for Clooney, that not much else in the film is award-worthy. When you leave the theater, you won’t be disappointed, but you won’t be exhilarated either.[Edit Jan . 19th – The Golden Globe Awards were announced – Clooney didn’t win but Reitman did for Screenplay – so I was wrong on both sides of the transaction!]

To take this review in for a landing, I’ll state that despite the fact that Bingham, Goran, and Keener are always flying high for business, the film really lacks any high points. But that doesn’t make it a bad flight.  It is just as the title implies – simply a few hours of your time spent up in the air, and spent well.